- September 11, 2017
This was a solo botanical recording trip to several under recorded 1km OS map grid squares (monads) in this area. I soon found out why it was under recorded, it was a long walk!
Much of the walk was quite devoid of wildflowers as the footpath went through large grassed fields for livestock. However, this is what I found, and the closer I got to the tidal Thames, the more interesting it became.

This first plant is usually associated with urban walls. It frequently escapes into the wild and it can be seen in many semi-urban areas. I didn't expect to find it in the middle of a cattle field. However, in the field the farmer had dumped a lorry full of bricks and rubble, and this was growing on it, a surprise find. 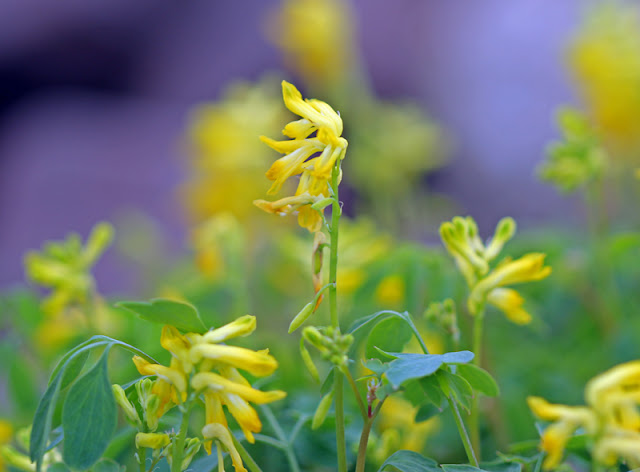 I found quite a bit of Bastard Cabbage along the field edges. It's a weird name to give to a plant and I'd love to know how it got this name in the dim distant past!

This is yet another yellow flowered crucifer, but when it has seeds on show it is very easy to identify. I have found it all over North Kent, yet it is rarely recorded. 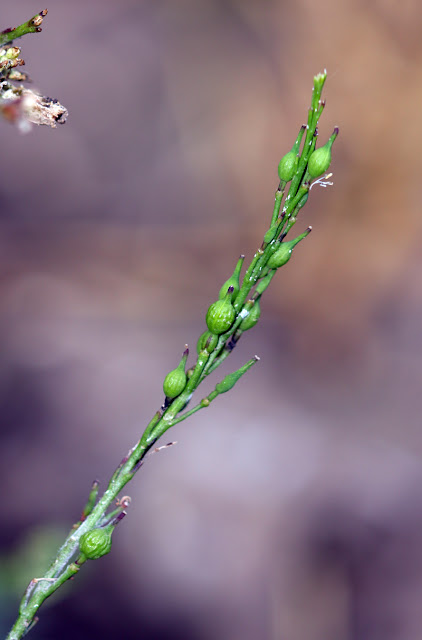 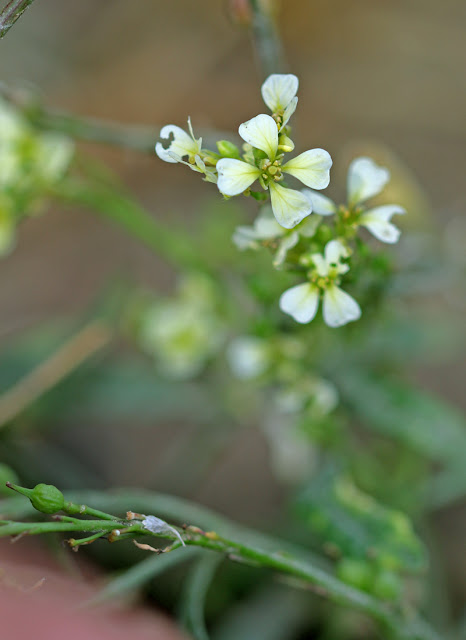 There were some far reaching, though not that attractive views here. The first photo is looking North towards Canvey Island, and the second looking East towards Southend, both in Essex.From this viewpoint I walked all the way to the Thames, turned right for 1km then back again on a parallel path. 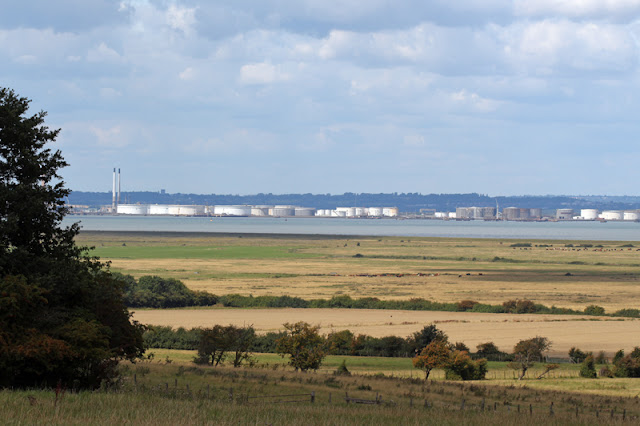 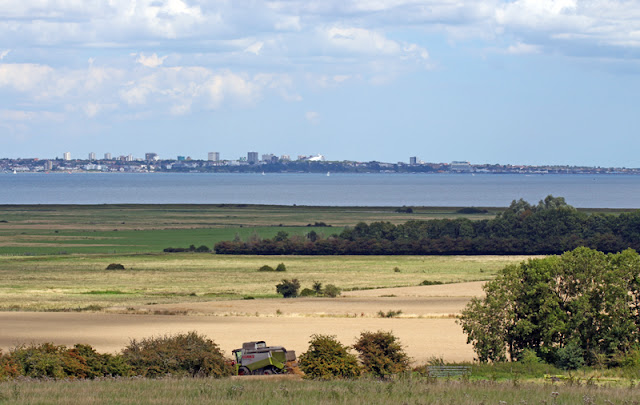 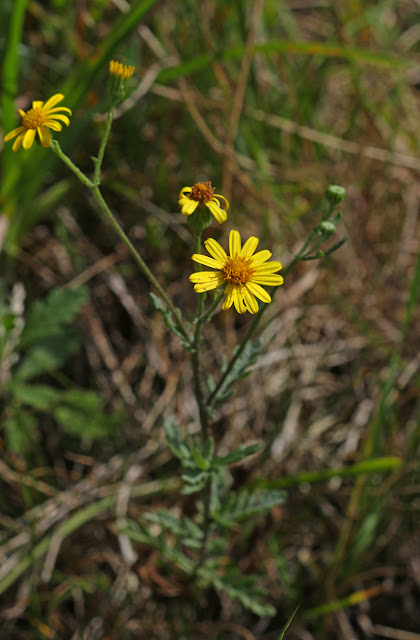 Hoary Ragwort in flower. For some reason, I saw very little of this last year, but it's everywhere this year.


It can be told apart from other Ragworts by its leaves which are quite different to Common, Oxford and Narrow Leaved Ragworts, all of which can also be found in North Kent.


The photo below shows the leaves of Hoary Ragwort and also how I mess up all my local maps!
The hand written number in the square shows how many records are on the BSBI database before I visit. I then scan and print it off on a single A4 sheet, fold it up and put it in my back pocket. That way I don't have to lug the whole map around with me all day long. 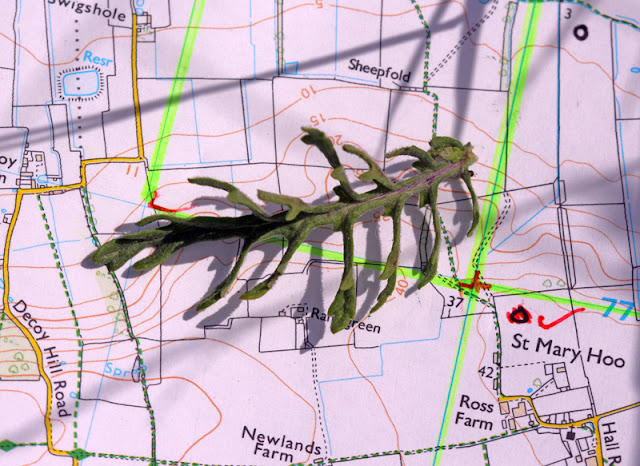 There wasn't much else of interest that I photographed, until I got to the Thames. As ever, the few remaining areas of saltmarsh were full of interesting wildflowers, from Glassworts to Sea Asters.  The photo below looks across St. Mary's Bay (not to be confused with one of the same name near Dymchurch). Anything that looks like sand isn't! it's ground up shellgrit, but most of the flats were good old Thames squelchy mud. 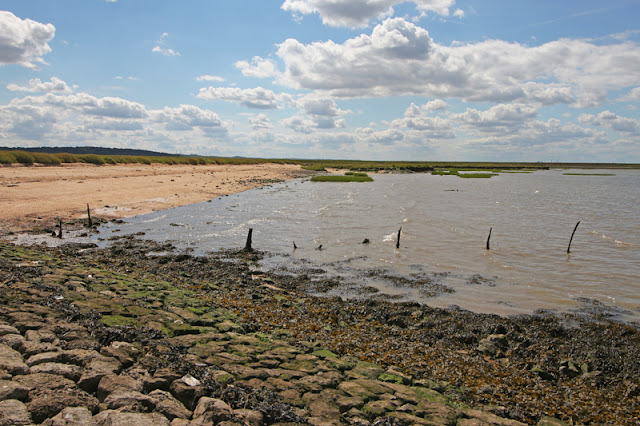 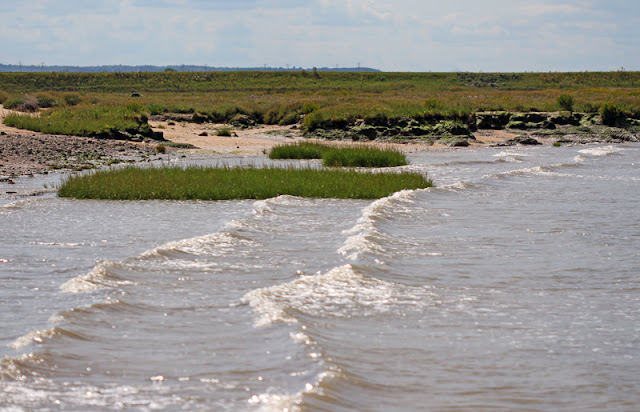 Golden Samphire is a Kent Rare Plant Register species, as thanks to coastal defence works around the County it is missing from most of Kent. However, along the Thames and tidal Medway it is relatively common, it's bright golden flowers brightening up the mud. 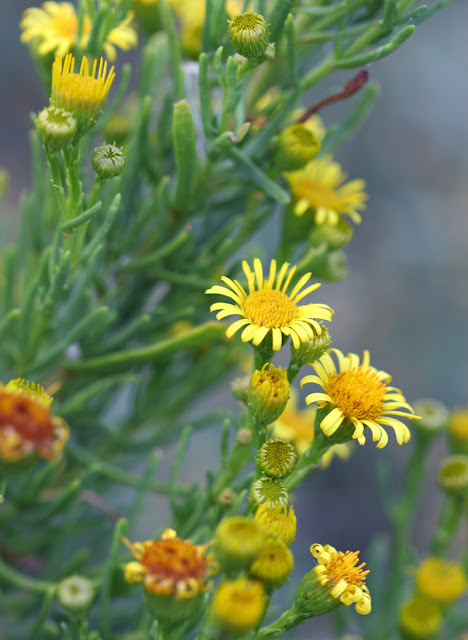 These plants, even when in flower, are often completely submerged by bigger tides yet remain unaffected as they have adapted to salty environments. Try watering your house plants with salt water and see how long they last. It's amazing how plants adapt to their environments. Another advantage of being covered in salt water regularly is the plant never has insect infestations. 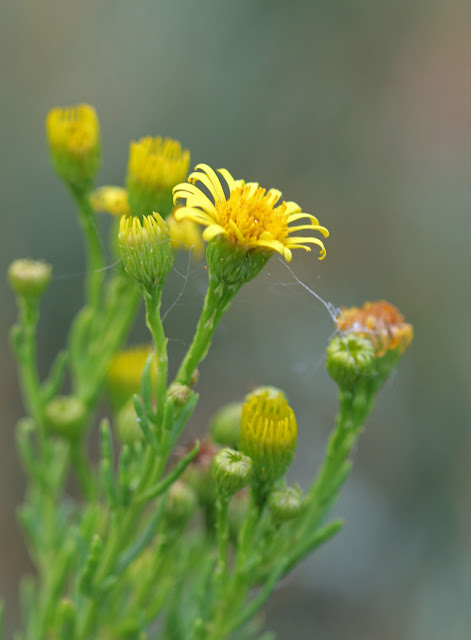 All the usual saltmarsh plants were present, including Grass leaved Orache, Sea Purslane, Sea Plantain, Sea Aster and so on, but my favourites are the Spurreys. This is Lesser Sea-Spurrey. It's petals are shorter than the sepals and it rarely has more than 7 stamens. Greater Sea Spurrey has 10 stamens and petals longer (or equalling) the sepals. 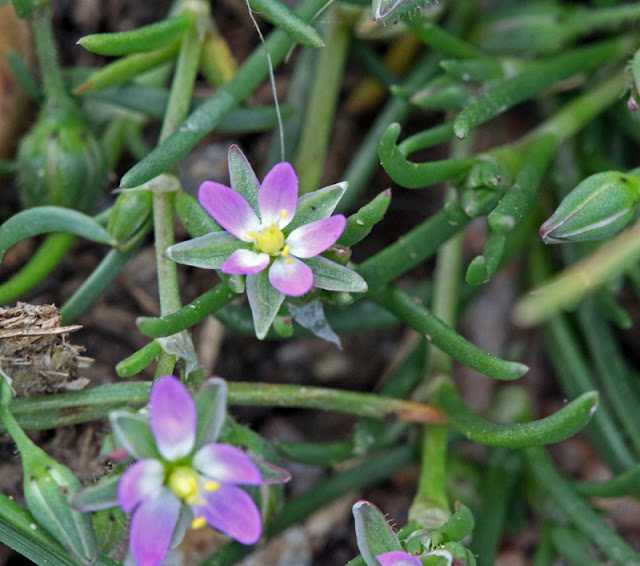 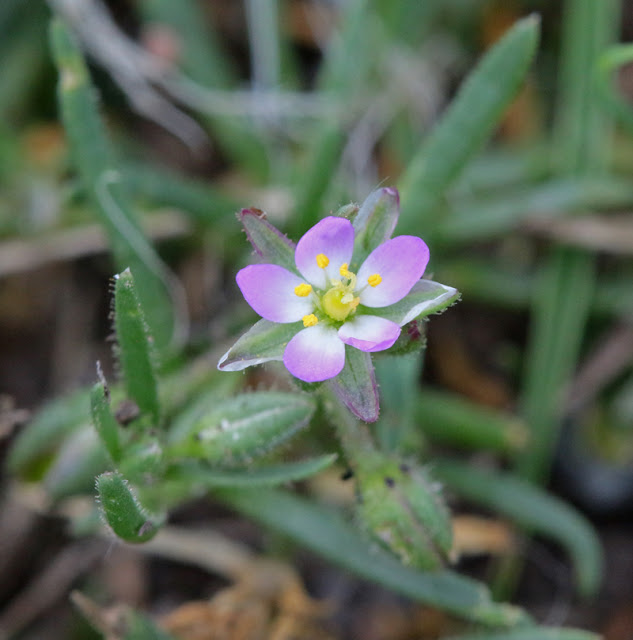 Here's a habitat photo for two Kent rare species, Artemisia maritima ( Sea Wormwood) and Inula Crithmoides (Golden Samhire). The silvery looking plants higher up the wall are Sea Mugwort and below is a long line of Golden Samphire. It was lovely to look at. 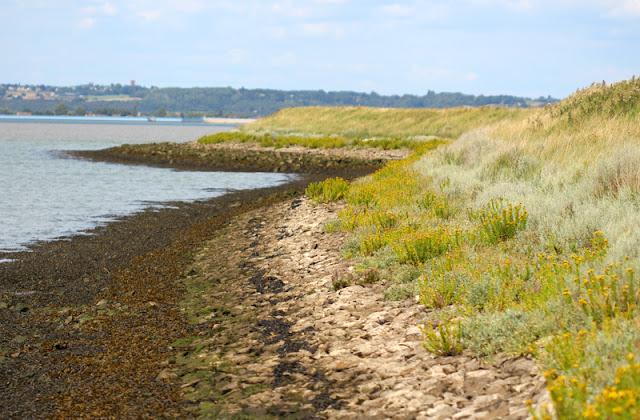 As I made my way around this shoreline, I came to another small area of fine shell grit. Here I found Sea Sandwort, first and only recorded here in 1958. Great to see it has survived here in all the intervening years. It wasn't exactly flourishing, but there were a few plants in the grit, most in seed, but some still flowering. It's not a rare plant, but it is unusual to find it in the Thames estuary. 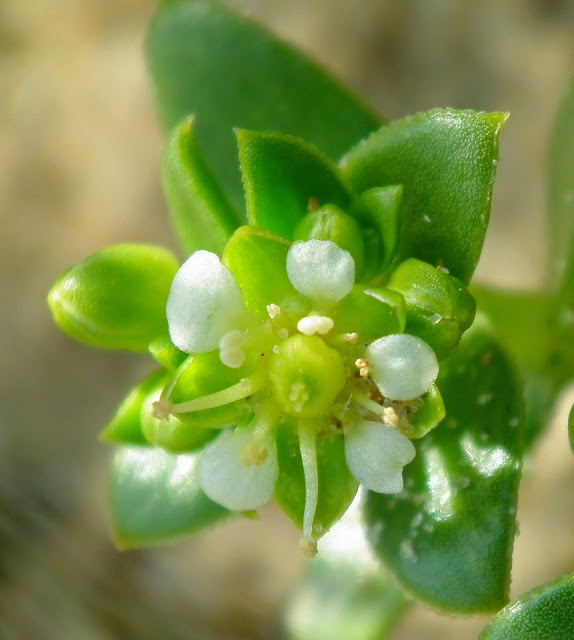 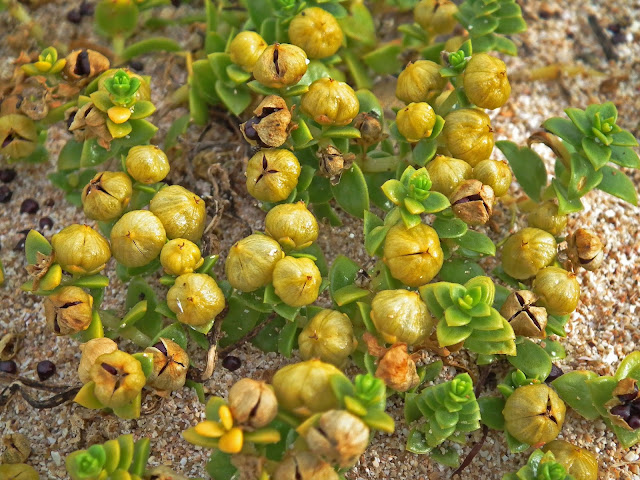 I then made my way back but on the landward side of the earthen sea defences. Out of the sea breeze were plenty of butterflies. I only managed to photograph a Common Blue on a Creeping thistle, but I saw Red Admirals, Green Veined and Small Whites, Brown Argus and an unidentified Skipper. 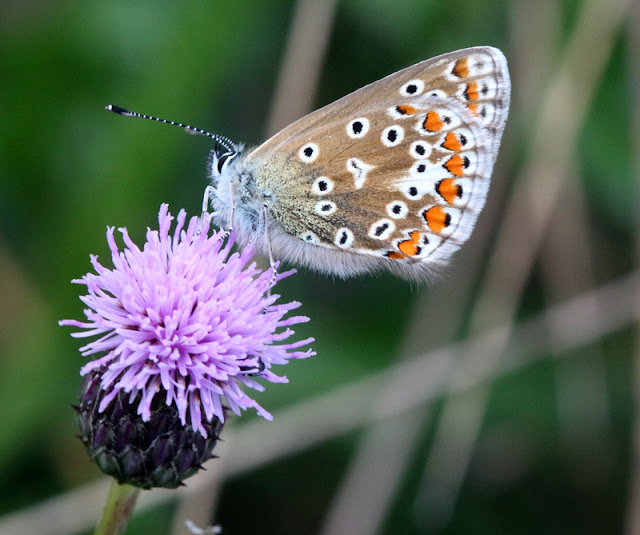 This area, on the back of the sea wall, was also well populated with another two species of rare plants in Kent. 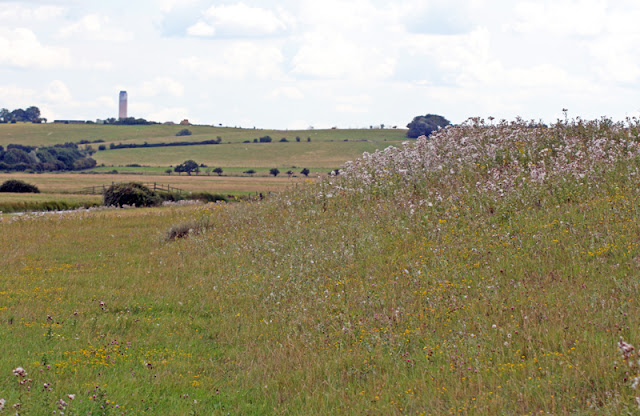 Very numerous here were the tiny Strawberry Clovers, a fascinating Clover with flowers that look like a small Red Clover and seed heads that look like light coloured Raspberries on the ground! Amazing! 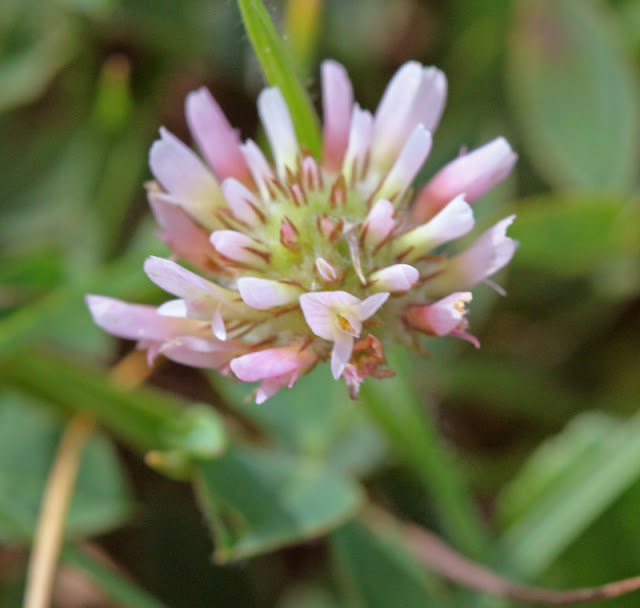 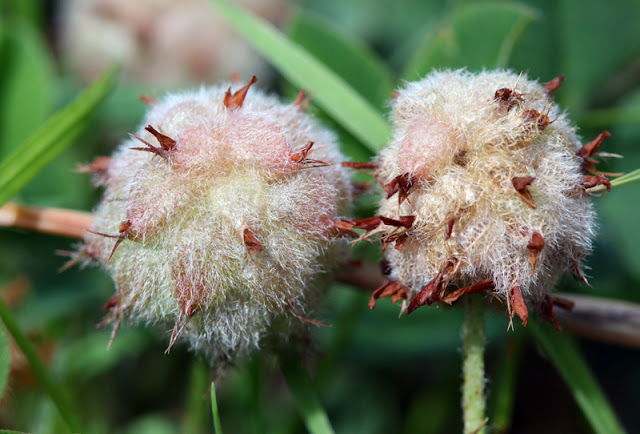 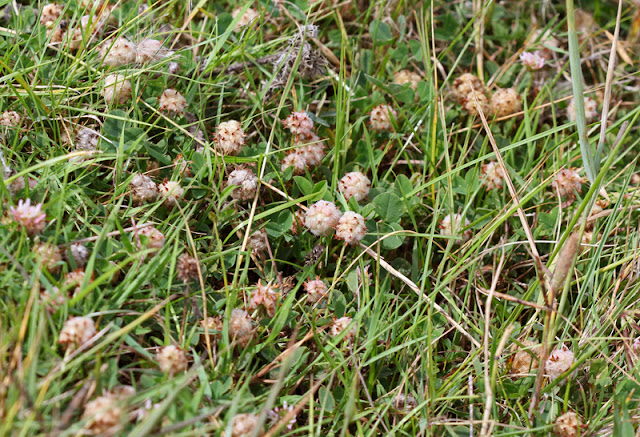 The second rare plant was confined to a smaller area behind the sea wall, but was still abundant there with over 20 plants seen.  They were Spiny Restharrow. These usually have the same pink and white coloured flowers as the Common Restharrow, but I found two bushes with all white flowers, a first for me, though finding all white variants is common in many species of wildflower. 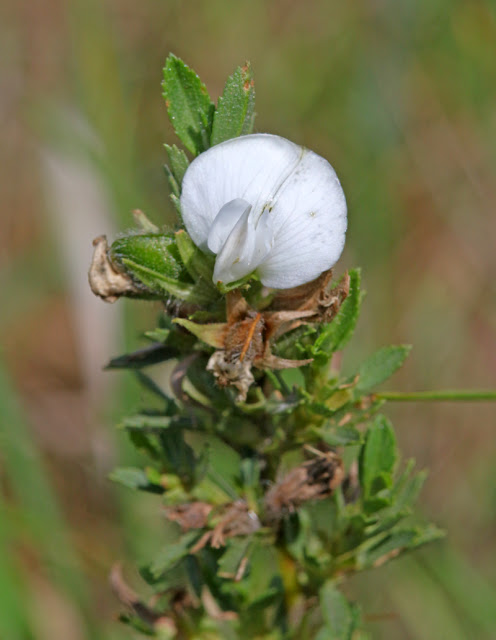 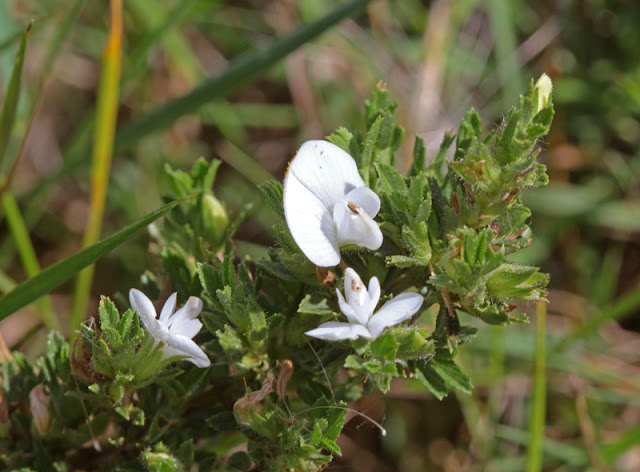 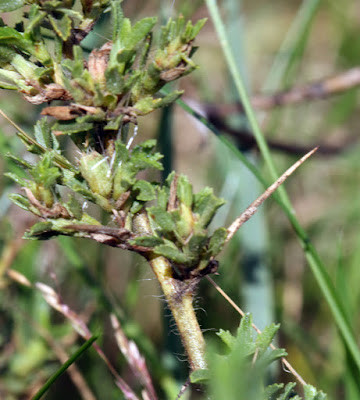 I may have said this before, but mind the spines!

Common Restharrow may have them as well (though I've never seen them spined). Check hairs on stems and terminal lobes of leaves to confirm identity. Spiny Restharrow is also invariably an erect bushy plant, whereas Common tends to sprawl across the ground.


All in all, I found 298 botanical records, the majority being new ones. It was a long walk covering four square kilometres, with much of it barren agricultural land (as far as wildflowers go), but it was well worth it in the end.