- May 21, 2019
Churches are a great place to start a botanical walk: firstly, there is usually somewhere to park nearby; second there will almost certainly be one or more public footpaths radiating from it and finally, many are semi neglected unimproved grassland habitats, perfect for botany (and insects too).

Ightam Church, which lies between Borough Green and Sevenoaks was no exception to this. Some of the churchyard was mown, but most was semi wild and looked a treat. It didn't take long to see its star inhabitant, which was present in good quantity, well over 100 flowering plants in total of: 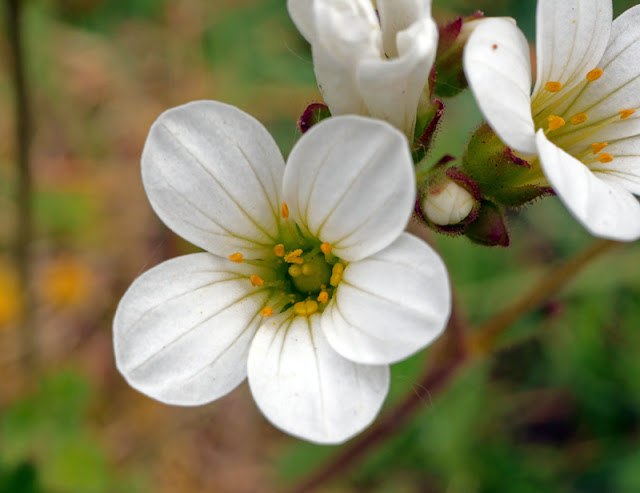 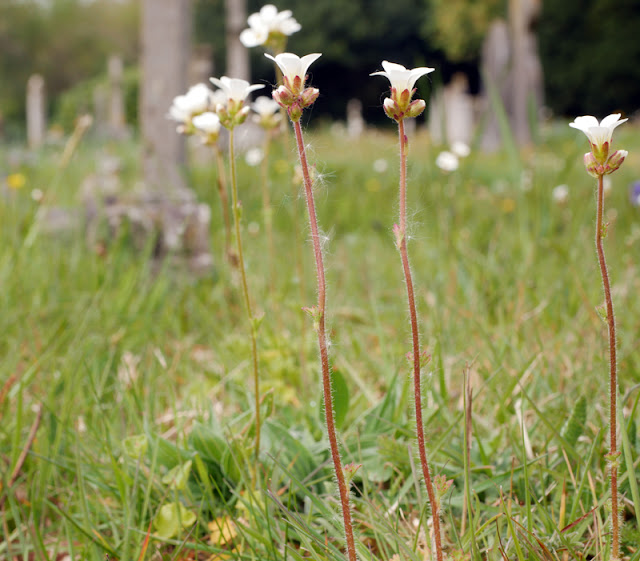 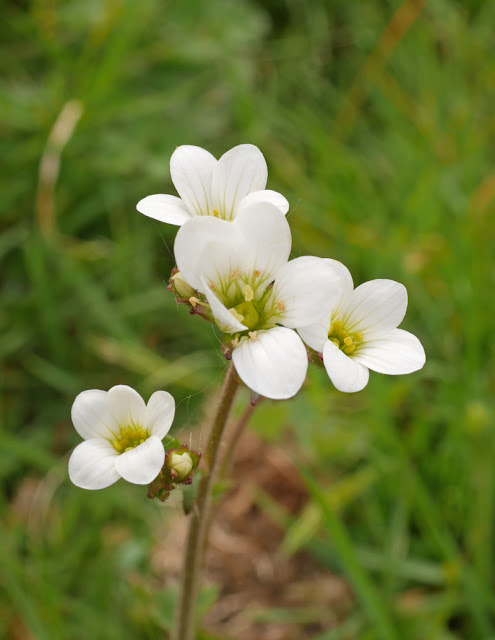 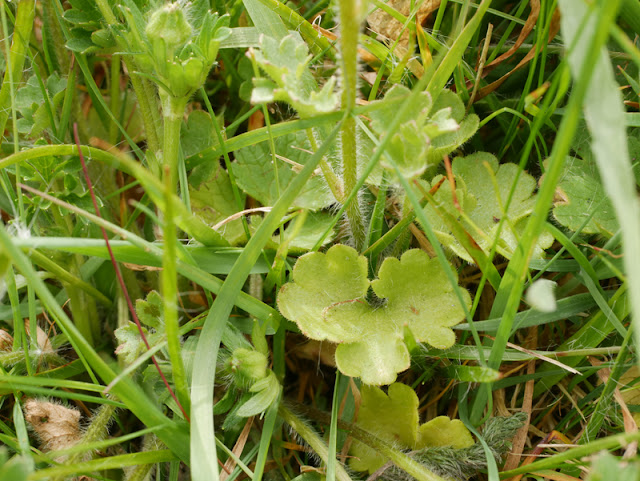 There were plenty of other wildflower about, but this Cornsalad caught my eye. There are a few species but they cannot be told apart until seeds can be examined. It was too early for seeds, so all I can say is that this is a Cornsalad and not which type.  They often grow on waste ground, road verges, pavements, neglected gardens and arable field edges if not sprayed. Her they were in and around the churchyard. Each flower is about 2mm across. 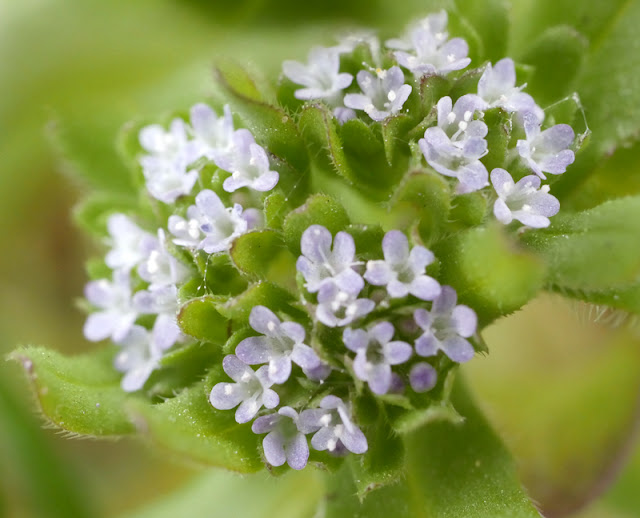 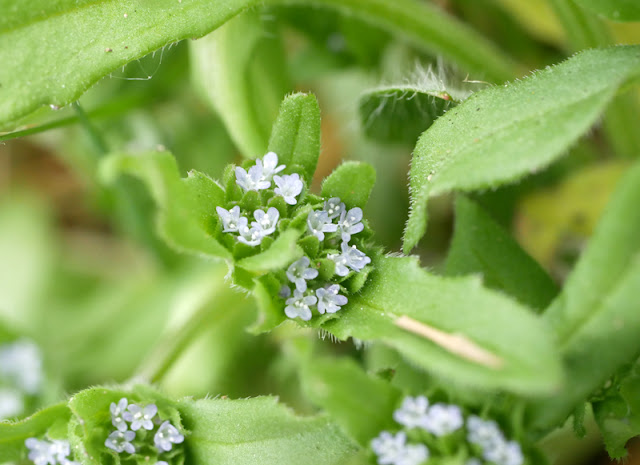 I then left the churchyard and crossed the A25 into some field edges. By the road were huge stands of Shining Cranesbills, a striking small Geranium with palmate shiny leaves and bright pink flowers.
I wasn't too happy with these photos, but then the traffic rushing by made things difficult. 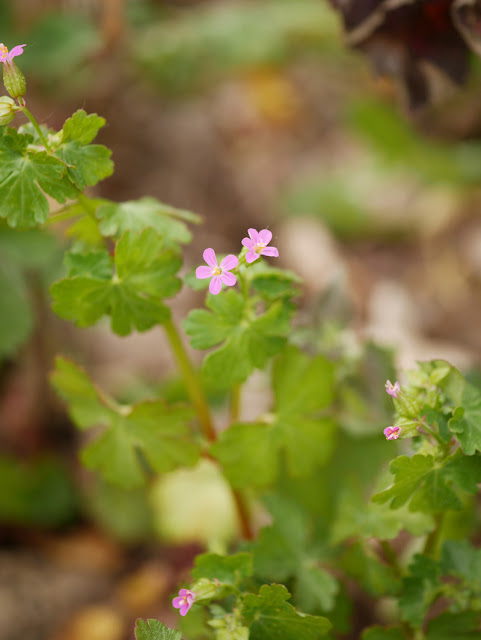 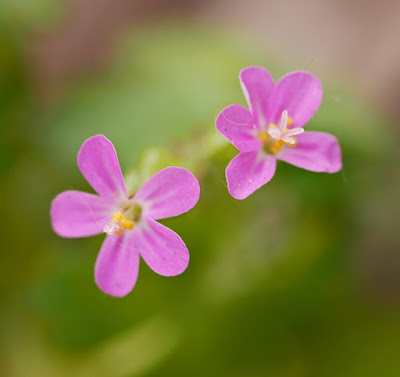 Once in the fields I spotted this tiny plant. Because I had seen it before I knew it was Swine Cress and so I knew the flowers were tiny and easily missed. I stooped down and sure enough there were flowers open on the plant, invisible at standing height. In this case the flowers were only 1 to 2mm across. If you find this plant, take good notes or photos of it as there is also Lesser Swine Cress that looks similar but has several differences, not least the flower arrangement, the seeds being like miniature dumbells and the leaves smelling (and tasting) of Cress that you buy in the shops.
As a thank you for showing me its flowers, I gave it a little drink of water from my bottle as it was rather parched! I don't know why I do that ( I do it often), but apparently several other people do as well. I guess it's appreciation for some natural beauty that you can see needs some watering. 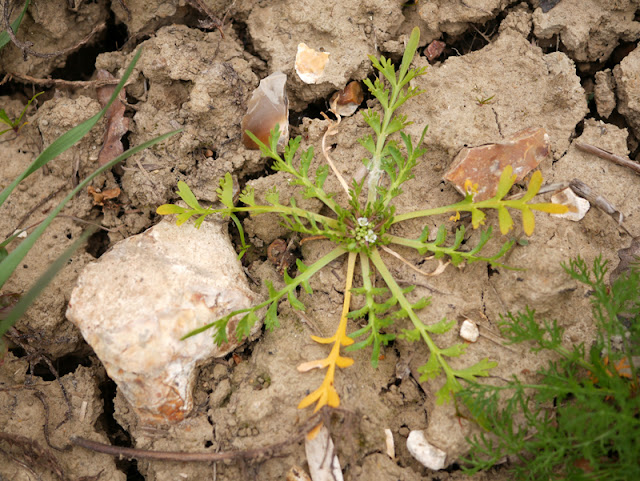 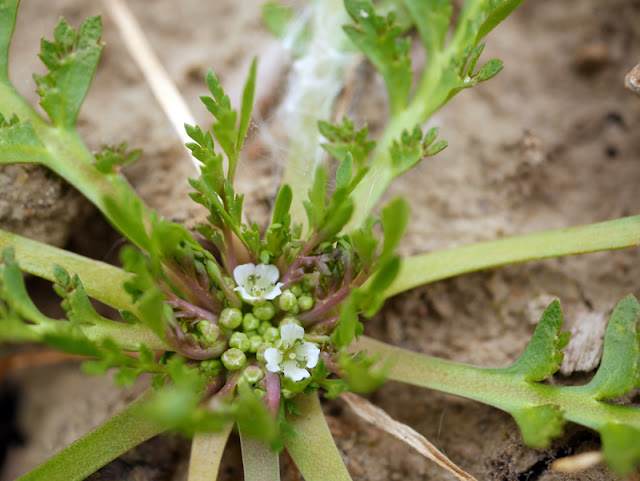 The following photos are of Broad Beans, a common arable crop in my part of Kent. However, as you may know, I rarely take photos of anything that had been planted but this one wasn't. This was on a grassy path with no crops anywhere near it. I've even found these flowering in the middle of a shady wood and another along the HS1 railway line, both nowhere near a crop field.
My pet theory is that a bean was grabbed by a hungry Wood Pigeon which flew off and dropped it along the way before it could eat it. Sounds plausible to me anyway! 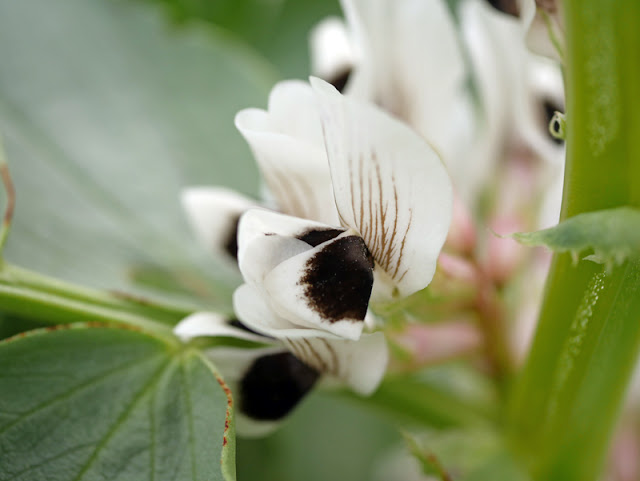 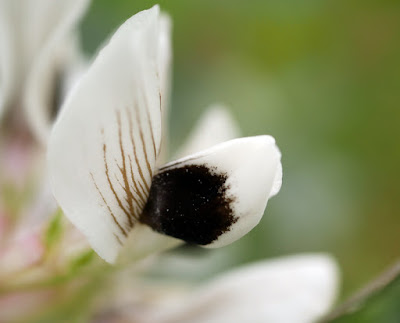 Broad Beans are actually a very attractive flowering plant in the Pea family or Fabaceae family to be scientific about it. 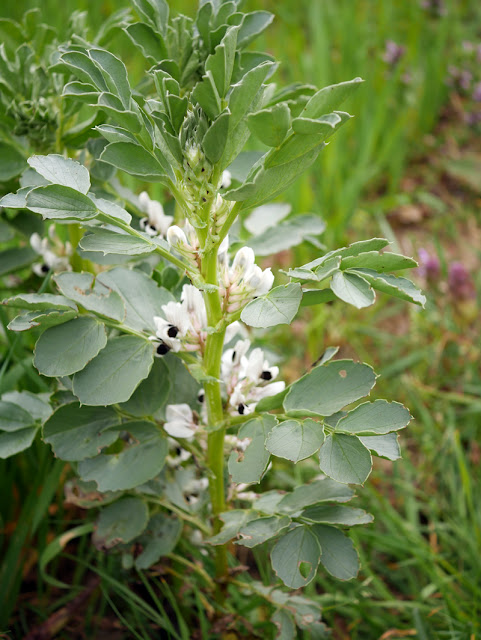 I then came across another Fabaceae plant, this one left over as a crop relict of cultivation or perhaps originally sown as ground cover for birds; Common Vetch but the fodder form - it was massive and dwarfed the common and usual forms of Common Vetch. In hindsight I should have put something in the photo to show scale and thus show its true size. There are three sub species of Common Vetch, Ssp. nigra (smallest with narrow leaves) ; Ssp. segetalis (the most common and reasonably robust in size and form) and this one Ssp. sativa, the fodder form (simply huge for a Common Vetch). 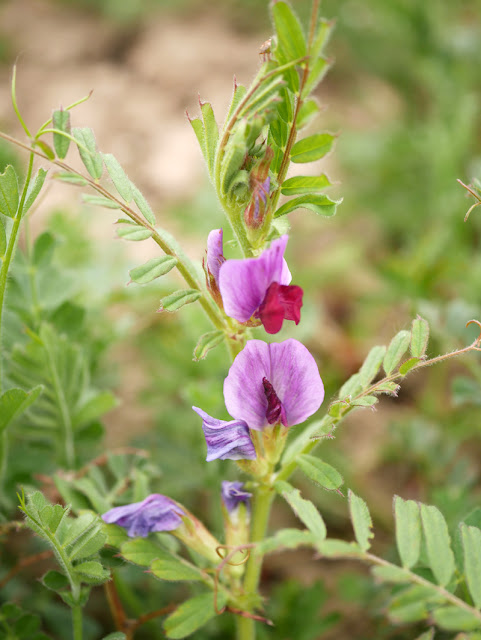 A view from the footpath of some very nice Kent countryside. Oddly, I have to try and force myself to remember to take some of these view shots on my walks. I get so used to staring at tiny plants on the ground that sometimes I forget to look up and appreciate the wider scenery. 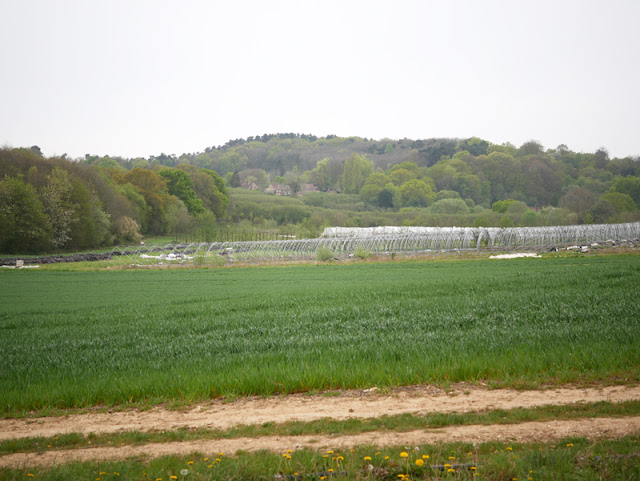 Looking the other way was the Wrotham transmitter, on top of the chalk north downs. The M20 and A20 both run diagonally up this hill past the transmitter and it is a credit to the designers of those roads that you can't see either road to spoil the view. Of course, the closer you get the more noise you hear but you can't have everything! 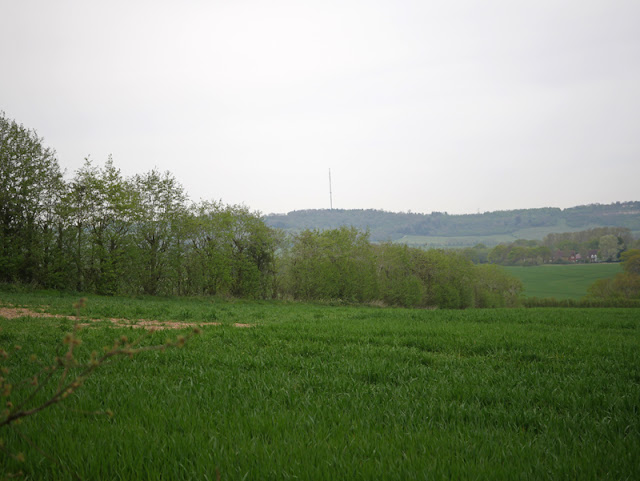 My final plant featured from this walk was another ground cover or crop relict species, Phacelia. It also shows up in some surprising places and is well naturalised in several parts of Kent. Here I found it on a path through a small section of woodland. Again, I suspect the seed may have been spread by birds, or perhaps botanist's boots in this case? So concluded another short walk avoiding any steep hills or strenuous exertions. Good health is now in sight for me and fingers crossed I'll be scrambling up the north downs chalk again very soon in search of rarities, curiosities and just sheer beauty.