- May 29, 2019
Perhaps this blog title is a bit grand, but in effect every botanical record we submit is history in the making and this blog reflects some of the excitement of a new find.
After a day out with the family we spent an hour or so on a walk at Littlestone Warren by the sea on the south west coast of Kent. This area is well known for rare plants such as Glabrous Cat's Ear and some rare medicks and I hoped to find some today. We found some of these but also something much more exciting, read on!

It didn't take long to find masses of Toothed Medick in flower. The very similar (but hairy) Bur Medick wasn't yet flowering. These really are very small and I teased this one out of the turf to photograph it. I've added some ID tips to the photo. It's nearly always found on the coast on sandy soils, but I have found it in a field edge near Dartford, a relict of wool shoddy from times past. 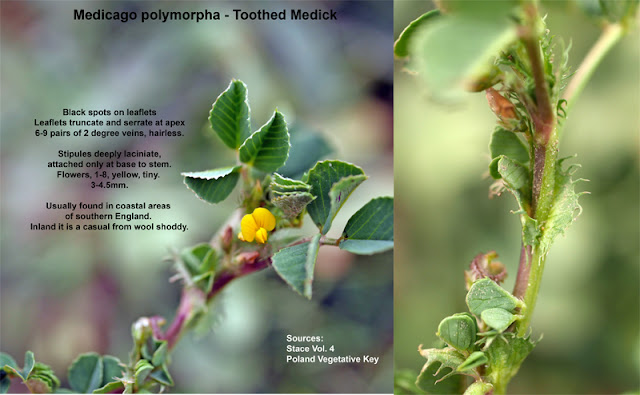 This incredibly tiny Early forget-me-not was just about possible to see from a standing height. 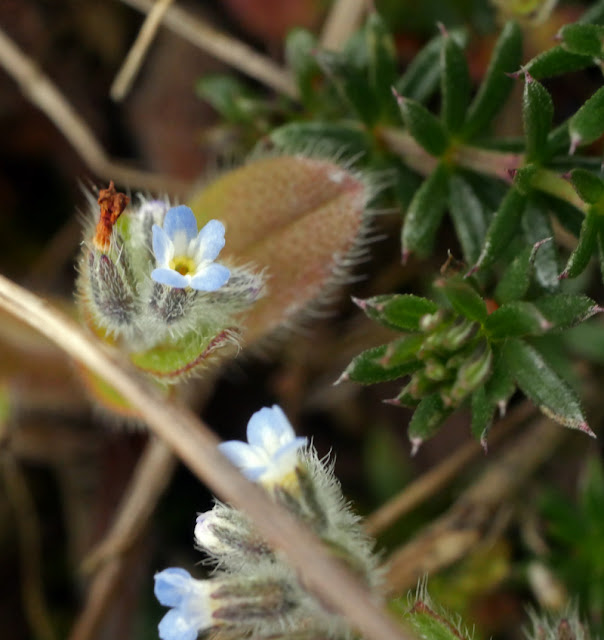 The bright yellow multiple flowers of the early flowering Beaked Hawksbeard was just coming into flower on the fixed dunes and sea wall. 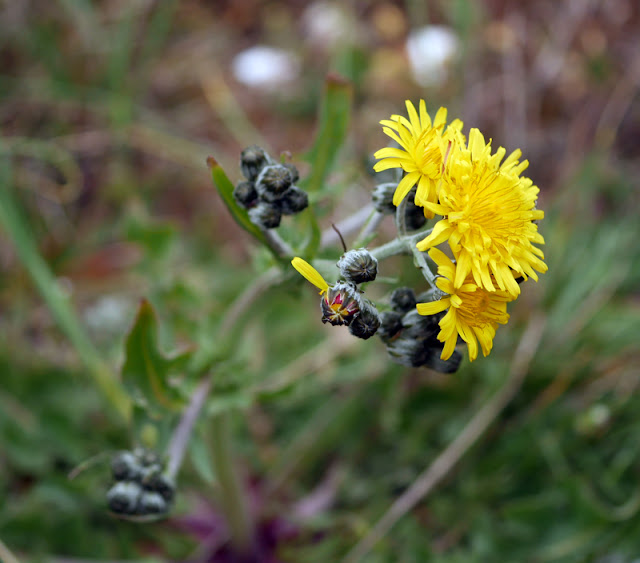 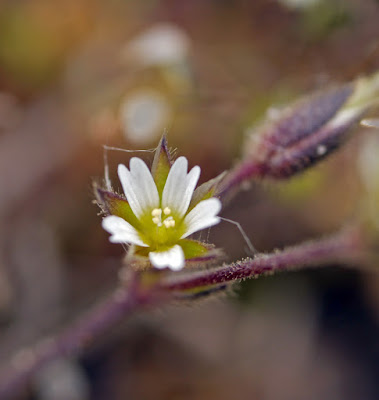 This plant is obviously a mouse-ear but which one?

Its characteristics seemed to fit Dwarf mouse-ear, but that was probably extinct in the county and not known here.

The county recorder later verified its identity as a five petal form of Sea mouse-ear. This normally is easy to identify as it almost always had 4 petals. Trust me to find the awkward one! 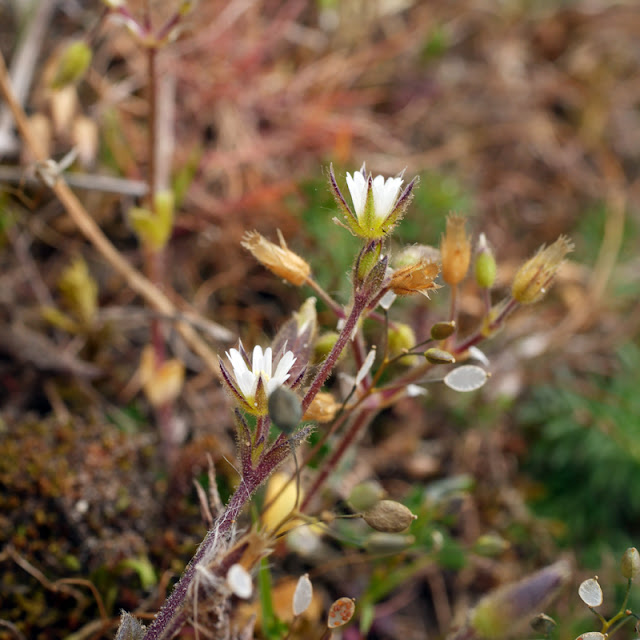 Thrift is a common seaside plant species and a big patch was in flower here. Unfortunately, they are on relatively long stalks and the coast is nearly always breezy. This made photography rather challenging, but I got a shot in the end using a fast shutter speed. 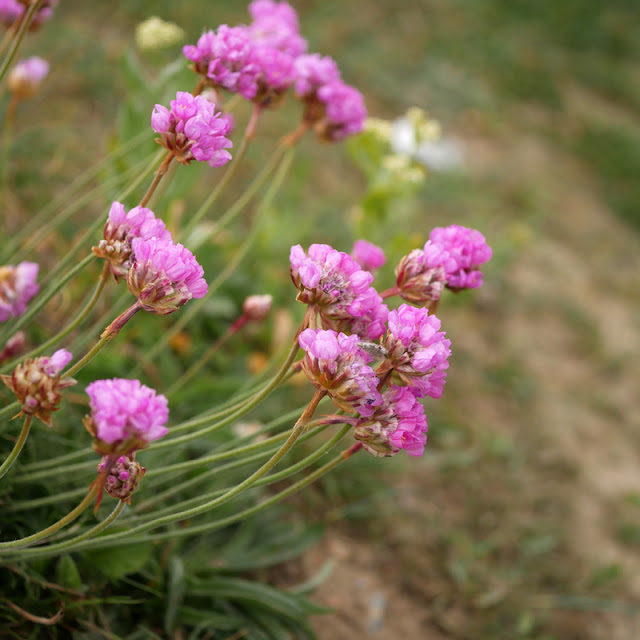 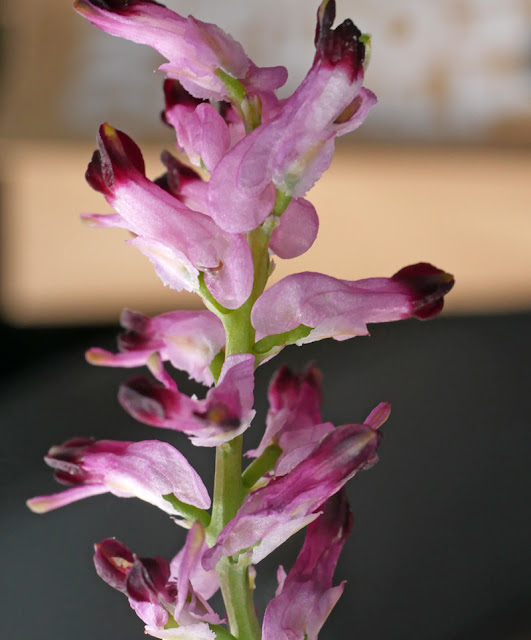 The return walk was along the sea wall, which in the past has given us Bee Orchids, Autumn Lady's Tresses and more.


Today it produced a nice Fumitory.


It was so windy I had to pick a small section of the flowers to photograph in the car! 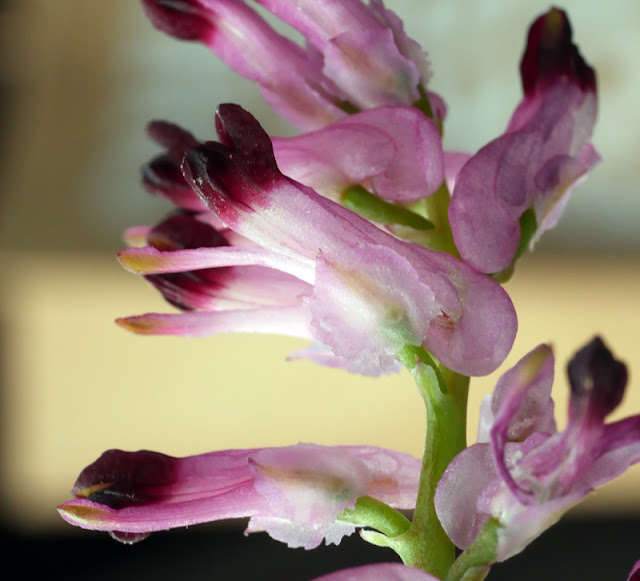 Fumitories are tricky to identify as most of the species look very similar. As such, not only do I take lots of photographs, I take measurements in millimetres of the sepals and petal length as well. I then use this information to key the plant in the BSBI Fumitories Handbook, a copy of which I own. The photo below has some of the information used to confirm the ID. 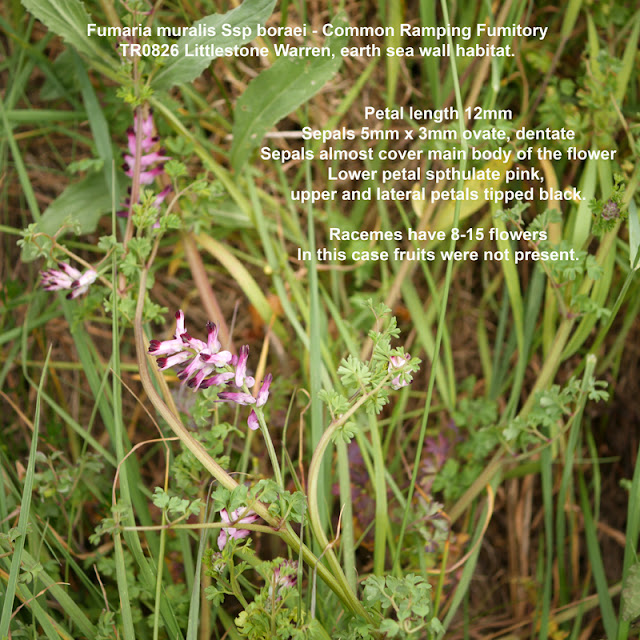 Here is the sea wall habitat along this stretch of coastline. Most of the rarer plants are found tucked in close to the wall which no doubt gives them some shelter from the cooler sea breezes. Whilst I was examining the Fumitory, my partner Elizabeth called me over to her. 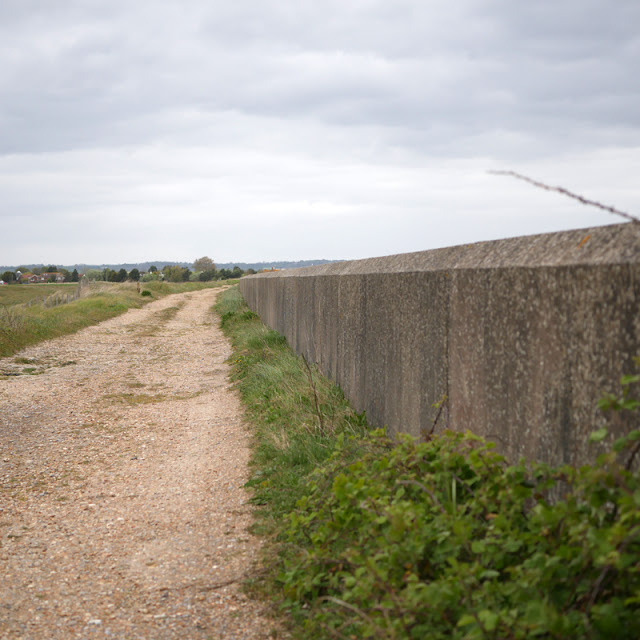 As I went to see what she and my grand daughter had found, I spotted a small orchid at my feet, then another, then another. By the time I came to her position it was clear we had found several Early Spider Orchids. This was very exciting as they had never been found here before. The nearest colony was at Samphire Hoe in Dover to the east and a single plant at Dungeness to the west.

Here's the first plant we saw, tucked into the lee of the sea wall. 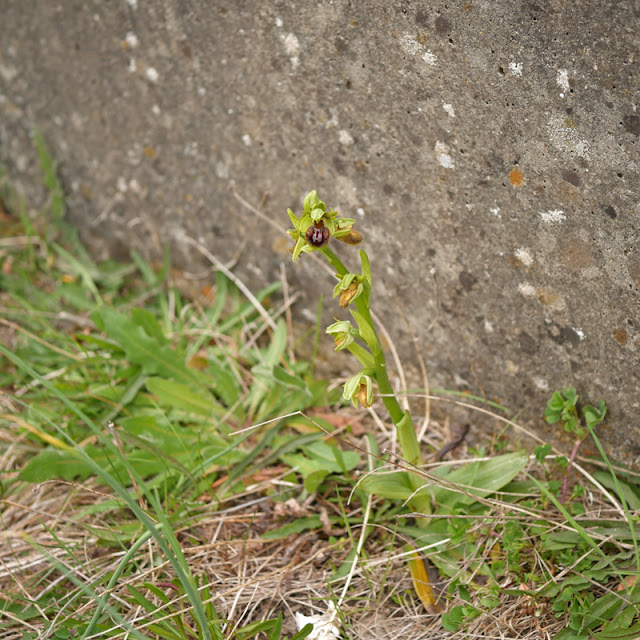 We found 9 plants of which 3 were in great condition, the rest going over. 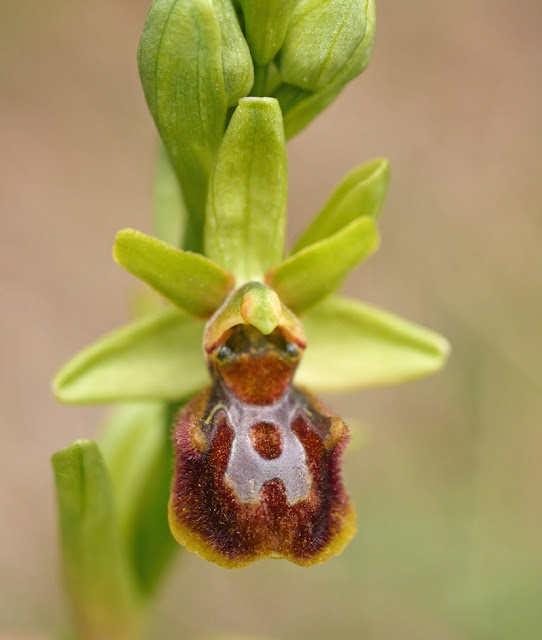 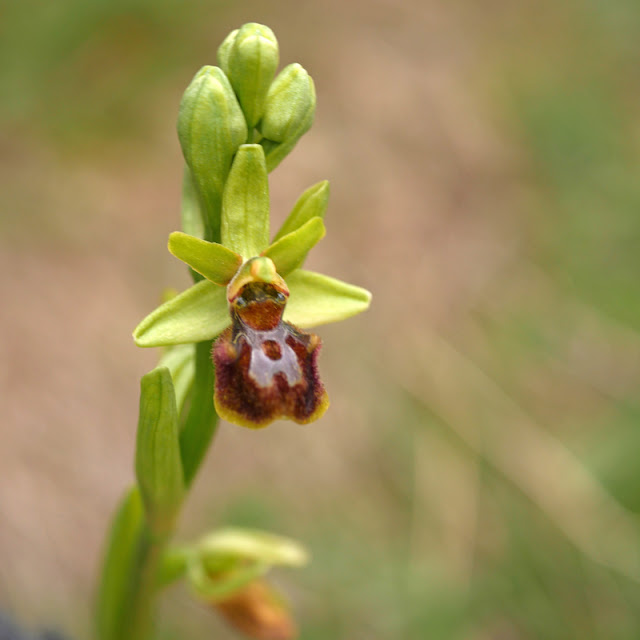 I was very surprised to get some good photos of them as it was very windy and the plants were constantly moving. I decided to sacrifice depth of field and use a 2000th of a second exposure, which seemed to work. 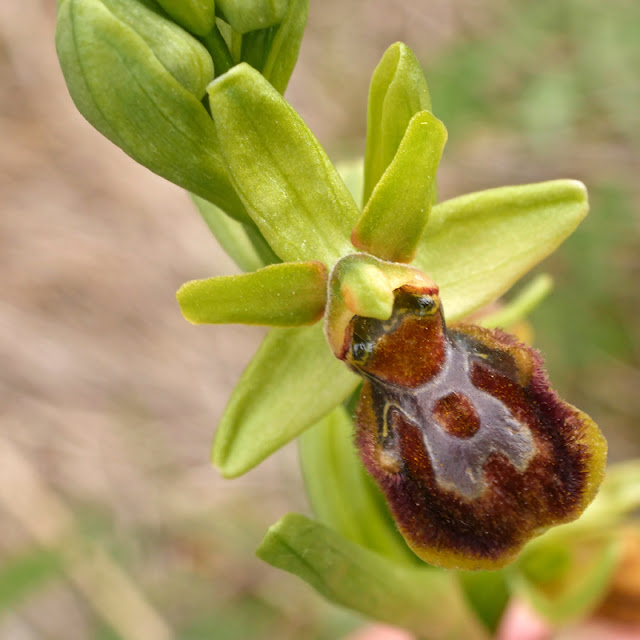 It just goes to show yet again that nothing in botany can be taken for granted. One would think that in a well known and well recorded and visited area that there would be nothing new to find. This proves that thought completely wrong.

It's a long sea wall and tiny orchids are easy to miss. I knew that others might like to go and see them once I disclosed their location so I put a chalk X on the wall. The next day a further 2 more Early Spider Orchids were found that we had missed. I wonder how many might be found there in 2020? 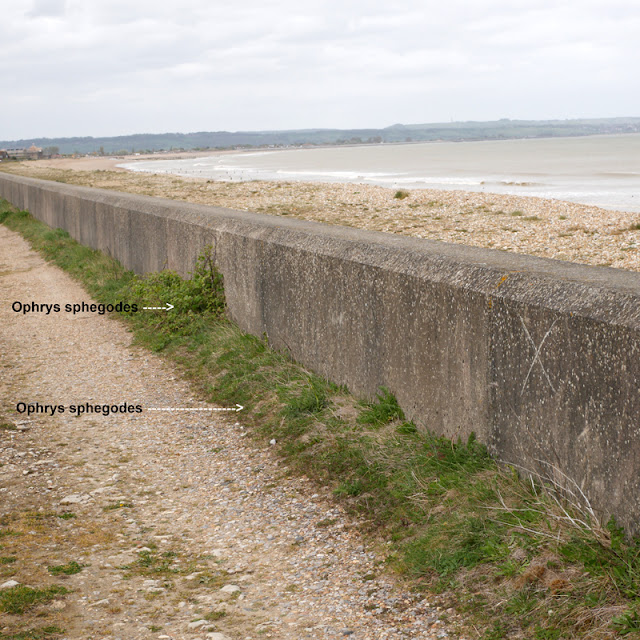 The orchid season is now in full swing, so get out there and find some new, uncharted and unknown sites for these most marvellous members of the plant kingdom.