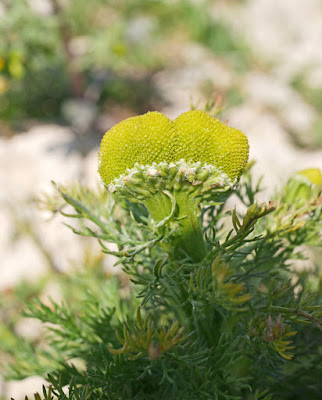 This day out covered some nice but easy walks along the North Foreland cliffs and Samphire Hoe on the east coast of Kent.
I'll start off with the short walk along the North Foreland which is just to the north of Broadstairs. The footpath runs along a clifftop through a private estate full of big, posh houses. Unknown to me at that time was that the area is home to lots of Lizard Orchids in June. I have to say though that I didn't see any rosettes, which are usually quite obvious.

First up was an arable field edge by the cliff edge where there were plenty of the humble Pineappleweed.

What made this one unusual was that it was fasciated, as were several others in this field.
Fasciated stems are produced due to abnormal activity in the growing tip of the plant. Often, an abnormal number of flowers are produced on affected stems and commonly some look like conjoined twins. 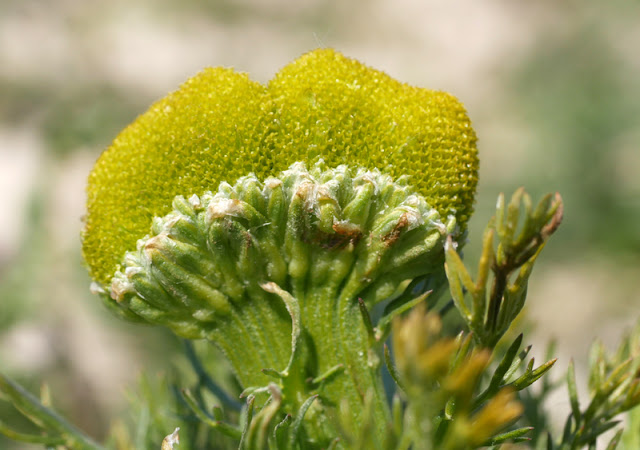 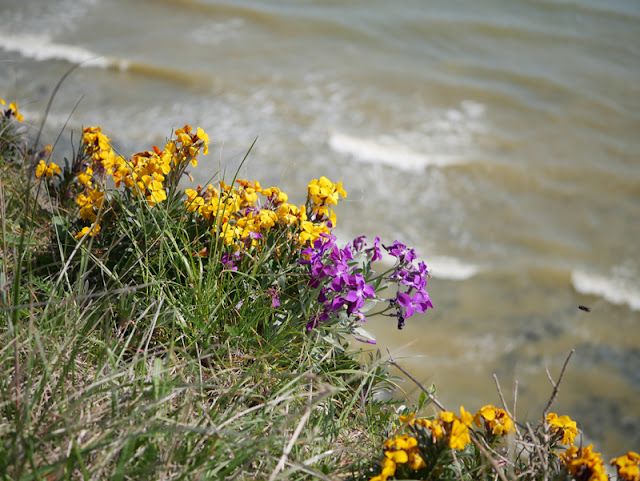 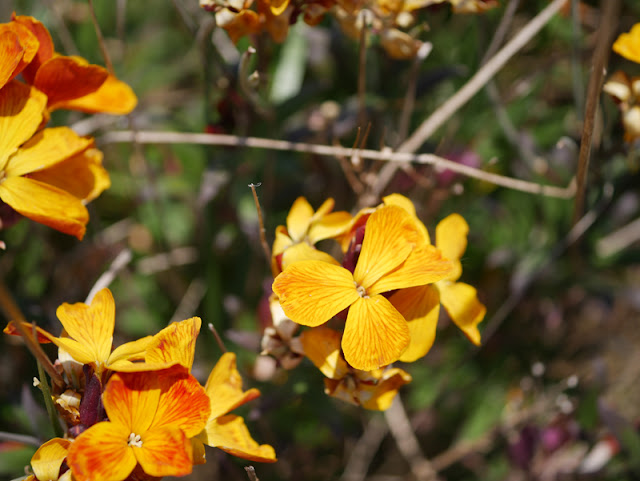 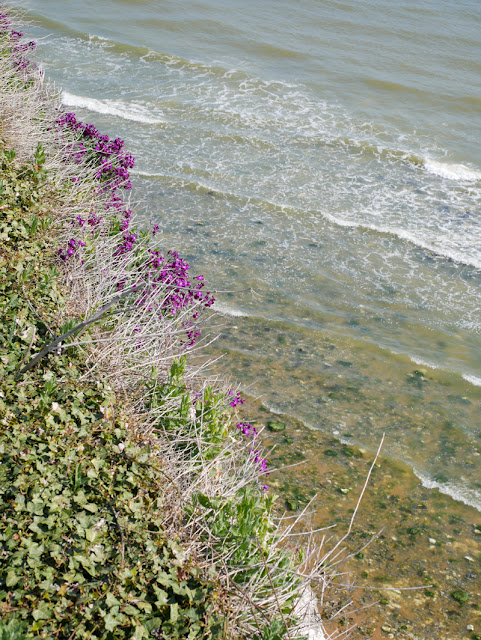 Don't go near cliff edges! They may be undercut and the ground can collapse under your weight before you can react.

Take a photo from afar and if you want a close up, use a zoom lens. 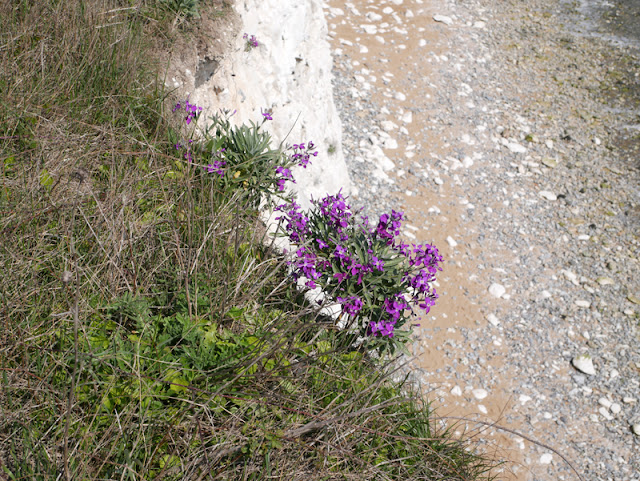 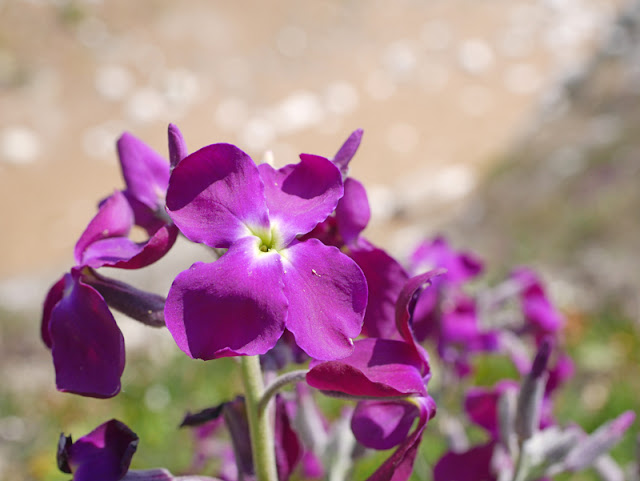 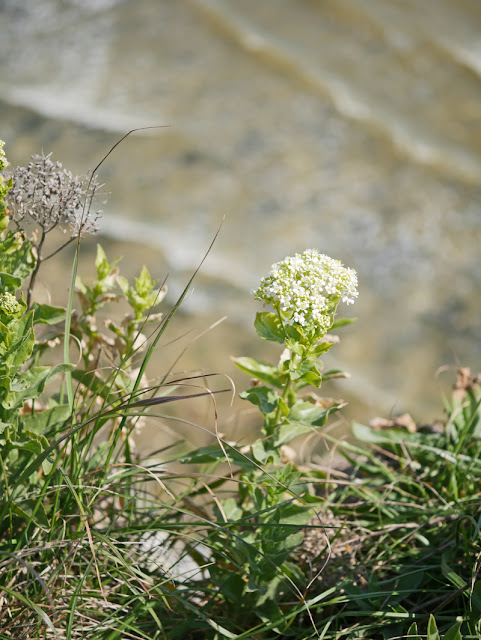 Hoary Cress was another cliff top plant in flower.

It is very common along road verges in northKent, but here it preferred the cliff edges.
It eems to prefer to grow in disturbed chalk habitats.

Some views along this walk. I think the first photo is where the Lizard Orchids would show. 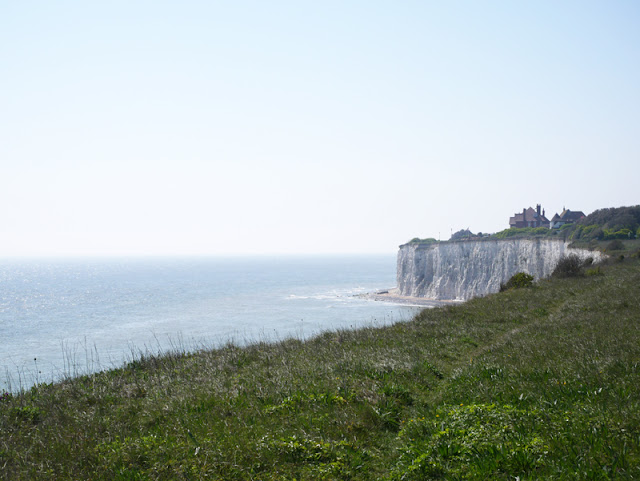 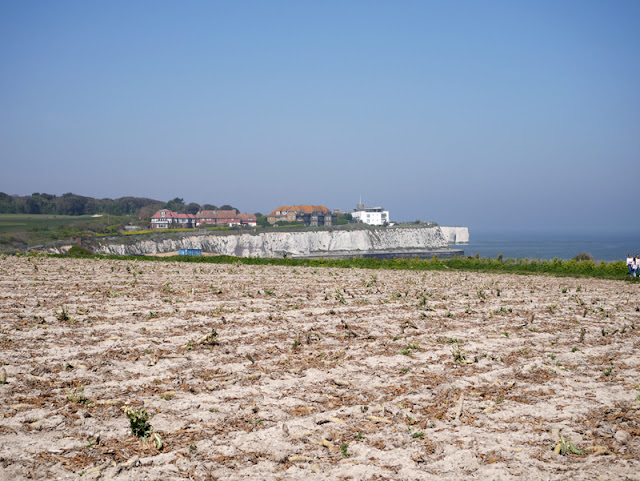 From here we had a slow drive to Samphire Hoe near Dover to see the Early Spider Orchids that grow there, usually in abundance.


However, the first plant I photographed was actually a Sedge. This is Glaucous Sedge which is easily identified in that it has leaves with one side a glaucous blue and the other light green. 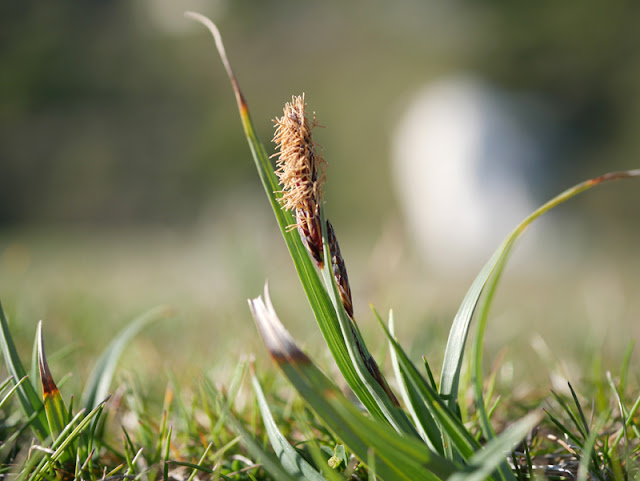 The first Common Birdsfoot Trefoil of Spring was now in flower, so warranted a photo.
Lotus corniculatus 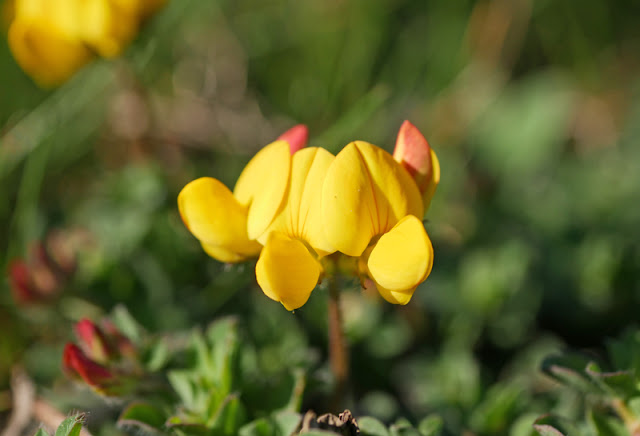 Common Vetch was now in flower but just the odd plant could be found. Of course, now (in mid May) it is everywhere!
Vicia sativa subspecies segetalis 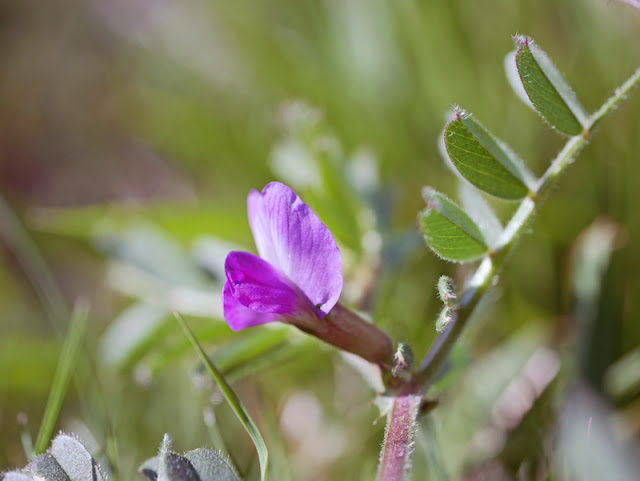 And here are the stars of the show so to speak. Most on the Hoe were only about 6" tall. 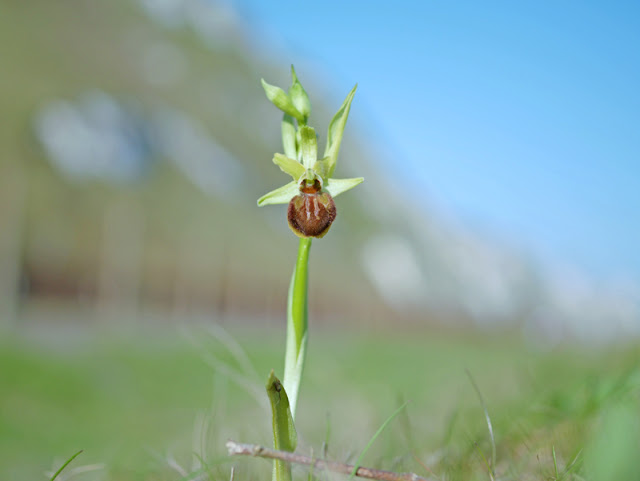 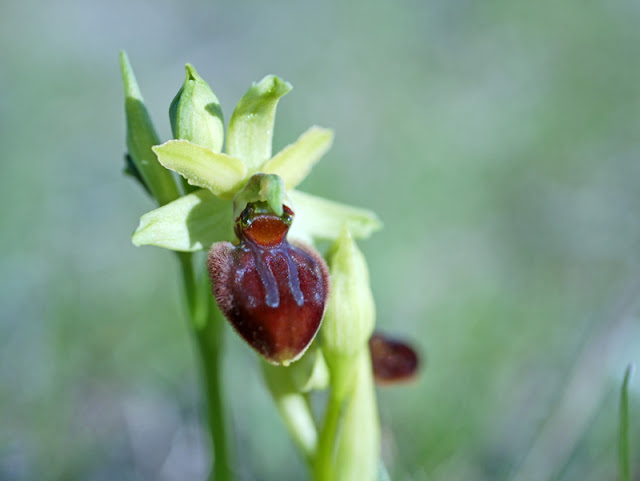 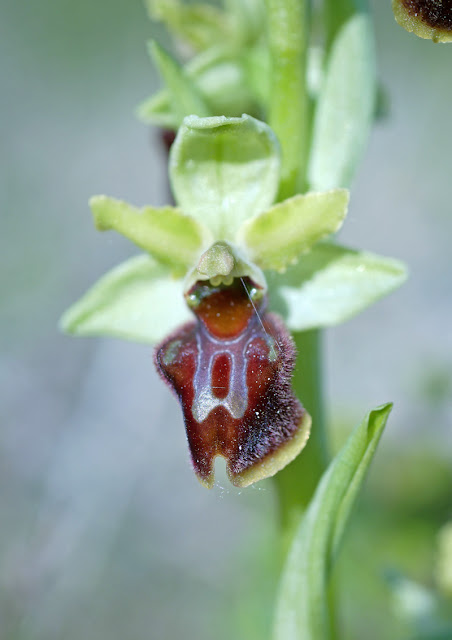 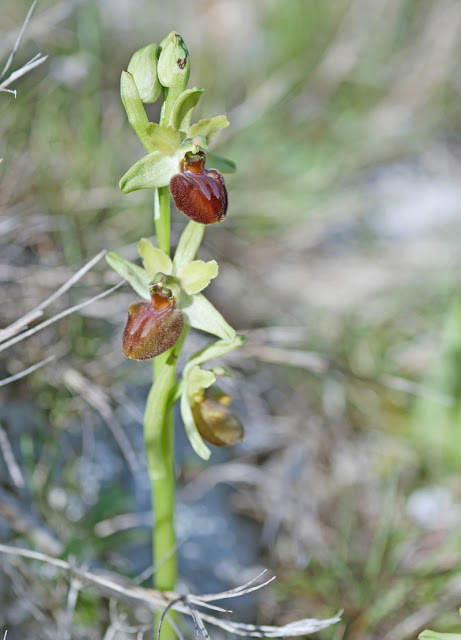 In past years I have found more impressive specimens on the beach which has slumps of chalk rock from cliff falls over the years. 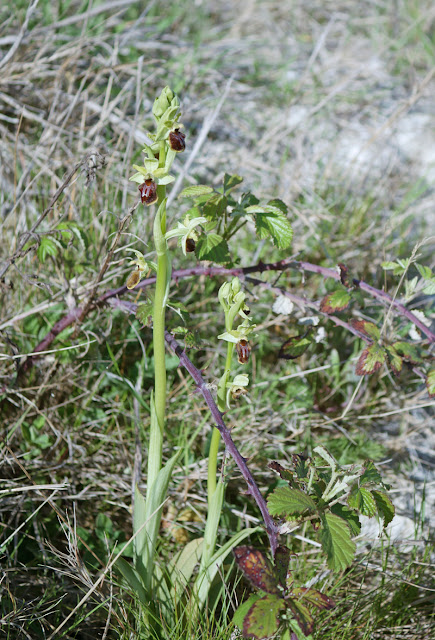 There were over 50 plants here and most were much taller with several flowers on them. I suspect these slumped areas are much damper than the Hoe as moisture seeps out of the chalk cliffs at their base. Perhaps this explains the extra vigour these plants seem to have. 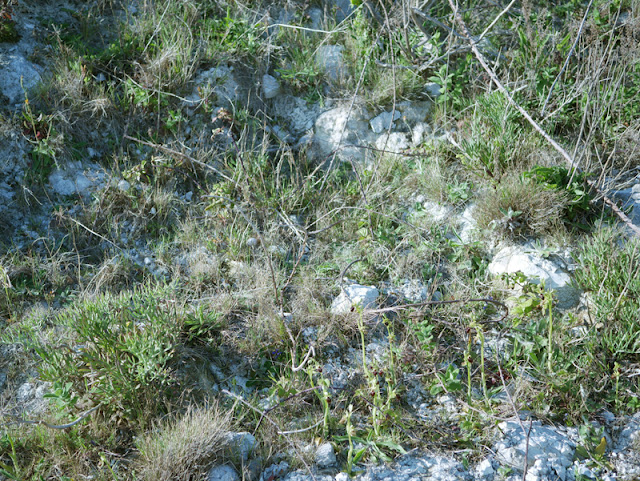 Samphire Hoe is a great place for a walk with the family whatever the time of year. In rough weather, the sea wall side is closed off as waves crash over it, but there's always plenty to see here. Why not get the kids into nature and fresh sea air and have a trip here? 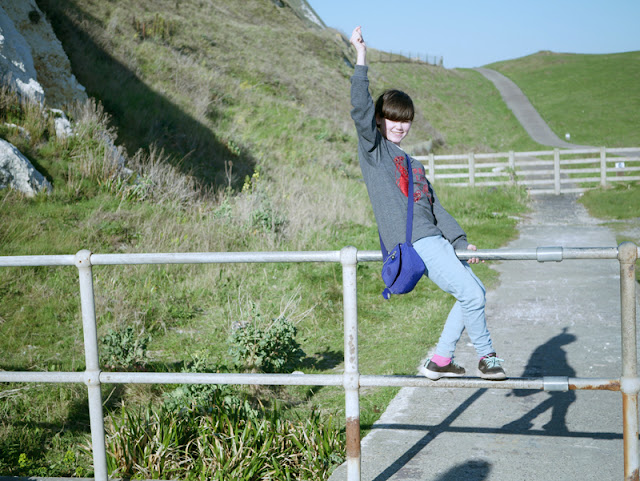