- May 20, 2019
These hills form the eastern side of the north downs that are cut in two by the River Darent and its associated valley. The hills are made of chalk and thus any open areas are species rich and well managed woodland comes alive with flowers at this time of the year.
Thankfully, I didn't have to walk up any hills as there is a path off the north downs way that takes you to the area without too much exertion. Here's some of what we found this day. 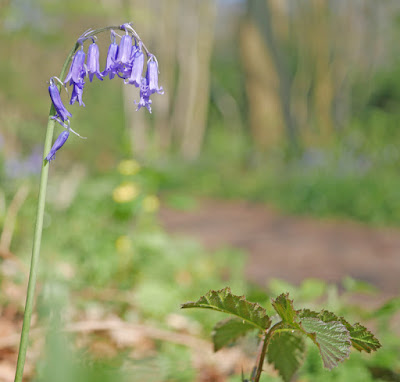 The first part of the walk was through woodland which was ablaze with carpets of Bluebells. These native plants were giving off a heady scent on this warm, sunny spring day and we stopped a few times just to take it all in and to re-charge the soul. 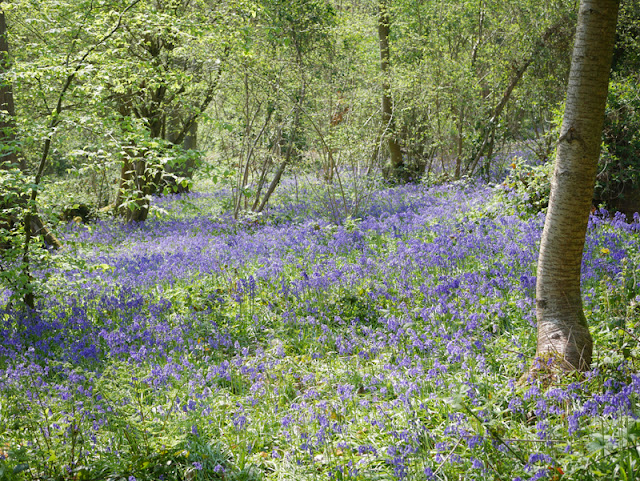 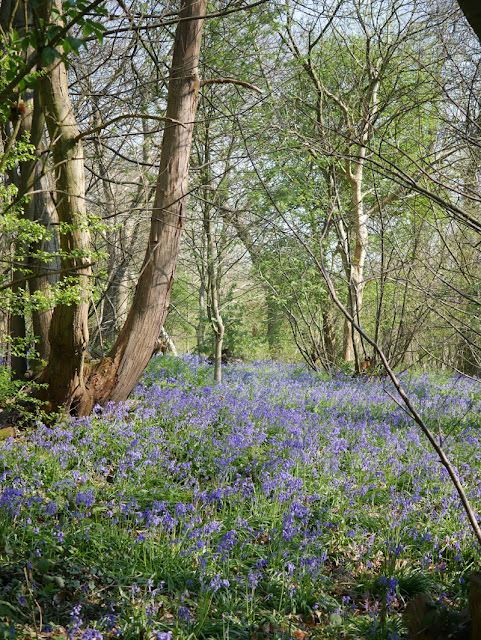 We tend to take these sights for granted, but the UK has more carpets of Bluebells than any other country in the world. Quite why that is doesn't seem to be explained anywhere! 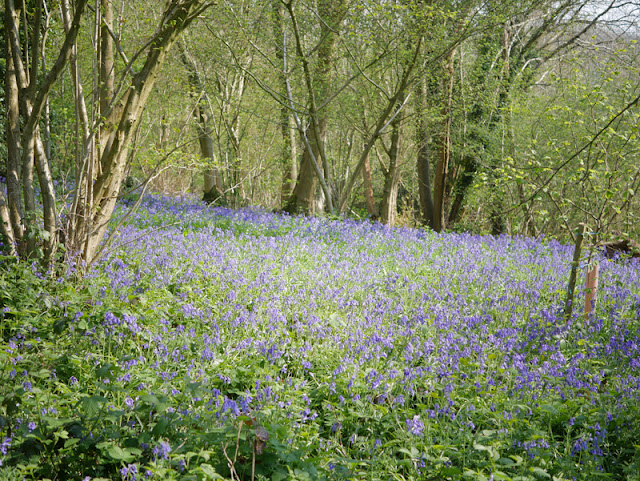 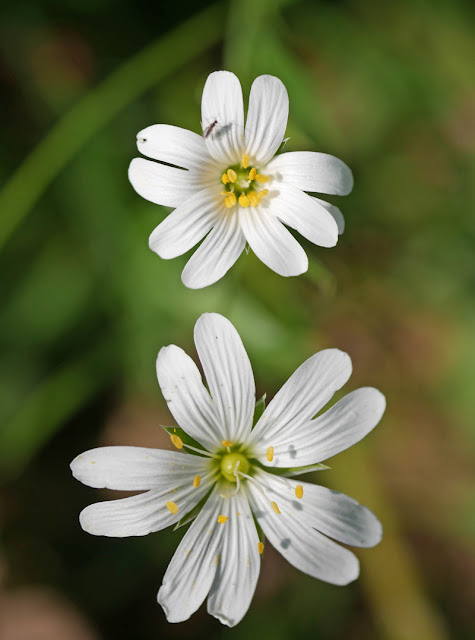 All the usual woodland plants were in flower, including Yelow Archangel, Wood Anemone, Wood Spurge, Moschatel and these Greater Stitchworts. 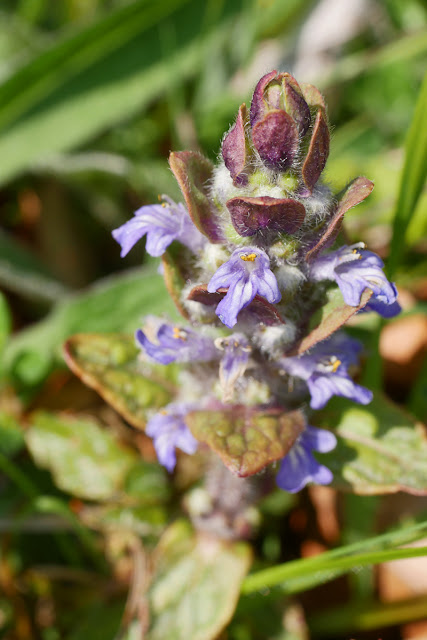 These Bugles were also in flower, often in dense stands. In other places in the past I have found these with pink or even white flowers. Mostly they are blue like this one here. 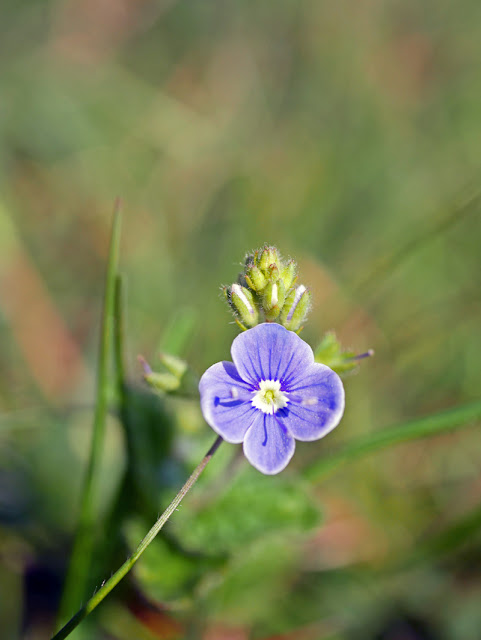 Germander Speedwells were coming into flower, both in and out of the woods. They can be confused with Wood Speedwells (flowering now in mid May). However, Germanders have  rich blue flowers; a spike of flower buds and two distinct lines of hairs running up the stem that even I can see from a standing height.

Wood Speedwells have a pink/lilac single flower coming from the leaf axils and have all round hairy stems. I see lots of both now (May) often together and they really do look quite different as a glance.

Bush Vetch completed the woodland flower photos today. They always look a bit untidy and turn shades of blue as they fade, but they are a favourite of mine. 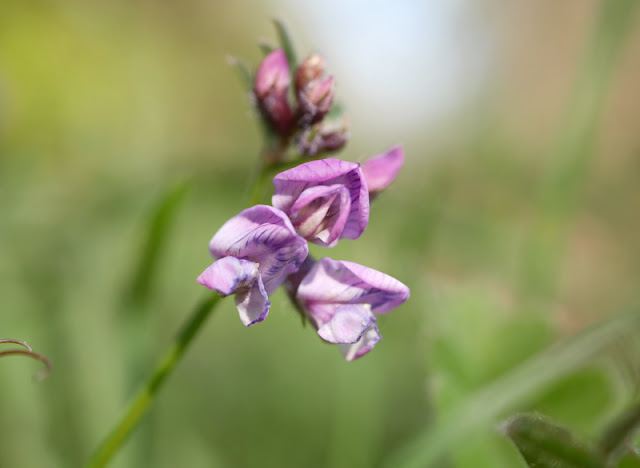 We then came to the chalk turf area where I counted over 100 Early Purple Orchids in flower. The only problem was that they were all so small. Unlike the statuesque form of those found in shady woodlands, these were stunted, drought parched affairs, but nice to see all the same! The tallest was about 30cm (a foot) tall but most were around 10cm (4"). 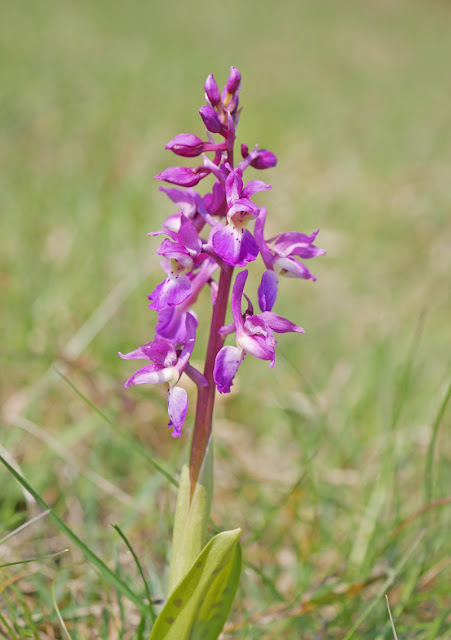 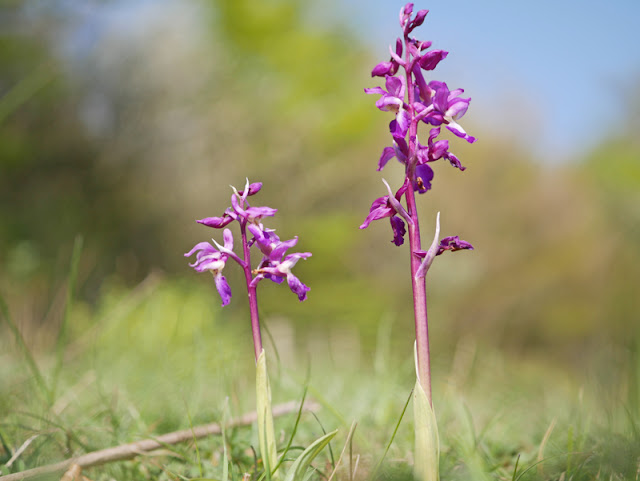 As I walked and knelt down to examine plants there were two sensory experiences I encountered. I think most botanists would know what habitat they were if they were taken there blindfolded.
The first was the "Ouch!" of kneeling or sitting on Dwarf Thistles wherever one got down low, and the second was the beautiful smell of Wild Thyme filling the air as one passed and trod on those scent filled glandular hairs!
Back to the flowers - Dotted about the place were hundreds of azure blue coloured flowers of Milkworts. In the majority of places these turn out to be Common Milkwort, but on chalk it's always wise to check for a false basal rosette. If present you have found Chalk Milkwort, a lot rarer than Common Milkwort. I sat down next to some plants to see if I could find a rosette and - "Ouch", yes, I sat on a Dwarf Thistle. I soldiered on, a true botanist with determination and grit and "Yes!" it did have a false rosette. So this was Chalk Milkwort. In fact nearly all of them were this species here.

The flowers don't help much at all with determining its identity as they are pretty much the same in all the Milkworts. However, they do come in blue, pink and white forms too. 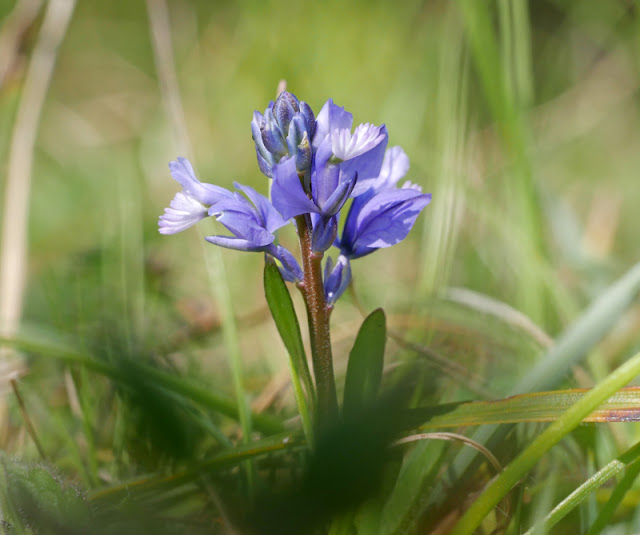 Here is the false rosette. It's false as there is a section of plain stalk with no leaves below it. 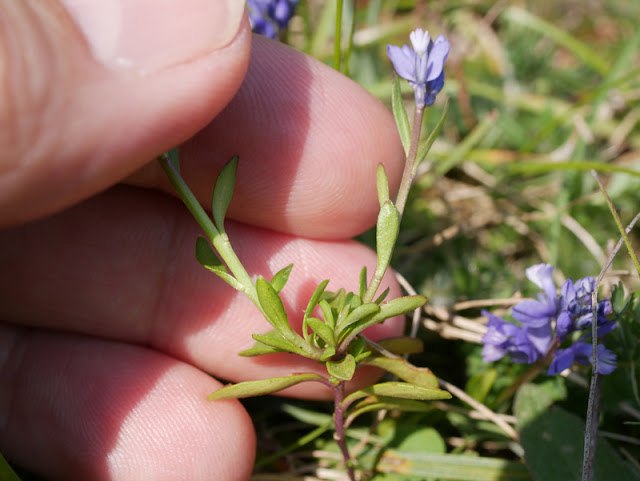 I didn't pick these but teased them out of the turf, Normally all you can see is the flowers poking up from the grasses leaving one to poke about to search for the leaves and stem. 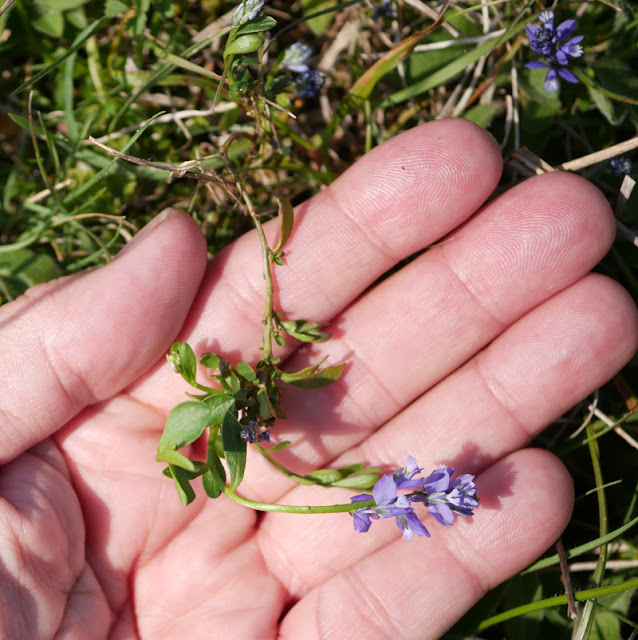 
Look closely below and you will spot some Dwarf Thistles hiding in the turf! (Cirsium acaule) 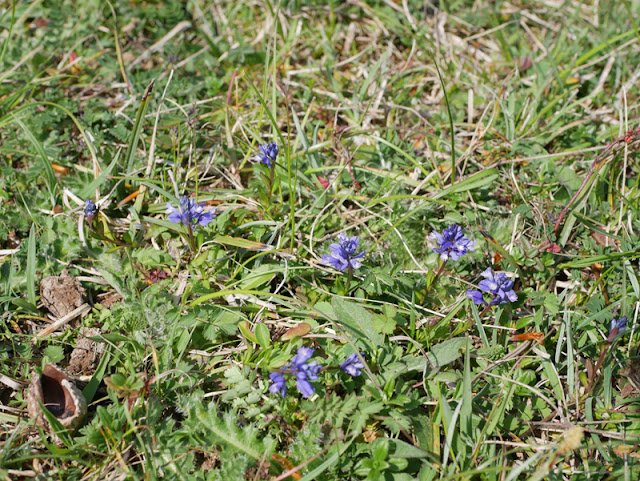 The last flower I photographed had no petals at all. It's Salad Burnet with tall spikes of male and female flowers usually all on the same spike. You are supposed to be able to eat the leaves in a salad, hence the name, but for some reason I've never tried them. 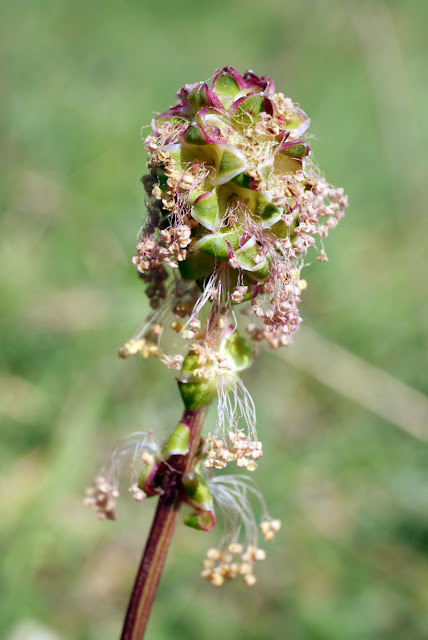 In previous years I had spotted Bee and Chalk Fragrant Orchid spikes in bud, so on my way around, I kept an eye out for any. It's good practice to do so anyway as you don't want to tread on and flatten any.  I didn't find either of those, but I was better pleased in finding a budding spike of Man Orchid. These are classed as Nationally Scarce and are listed as Endangered. North Kent has a high proportion of the population for them as they are a chalk loving plant, though for some reason they seem to be mostly absent from the Sussex downs.
The plant to the right of it is an Ox-eye Daisy coming up (Leucanthemum vulgare) which will be in full flower in May. 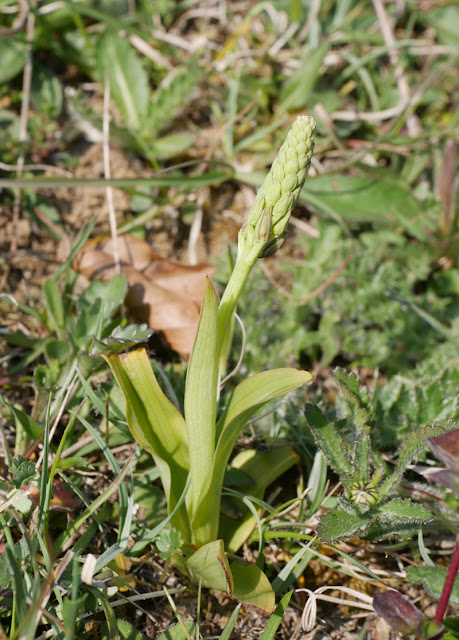 So ended a wonderful springtime walk; a time when the chalk loving species are beginning to wake up to enchant us yet again with their beauty and diversity, even if they are accompanied by the occasional "Ouch!".