Not all wild orchids are found in Kent, so if I ever want to see other species I have to travel. The object of this visit was primarily  to find and photograph Sword-leaved Helleborines and anything else of interest along the way.
These beautiful orchids are now likely to be extinct in Kent, thanks to neglect of their last habitats in the County. Their last known sites were located in woodland near Brasted. In the great storm of 1987 all the trees were flattened and later cleared. In this bright open environment, garden escaped Rhodedendrons spread rapidly and basically shaded out everything else, including these orchids. Such as  shame.

Anyway, we had a not very nice drive to Hampshire to a known location for them. Needless to say the M25 was at a standstill and we had to divert a long way South through country lanes, adding an an extra hour to the journey. On arrival, we were the only car in the car park and slowly walked through the main path of the wood. It didn't take long to see them. There were hundreds of Sword-leaved Helleborines here and other species as well. 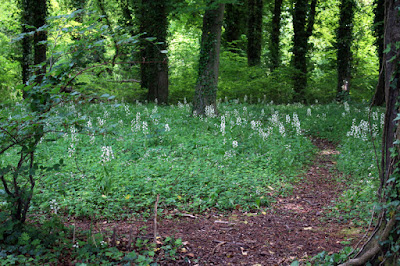 There were several semi open copses like this, each crowded with these delightful orchids. Although it was a sunny day, the dense canopy, with bright shafts of sunlight coming through, made photography quite challenging at times. 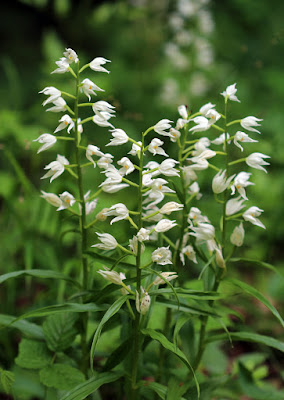 Here is a photo of the complete plant. The leaves spiral up the stem and are long and pointed. The white flowers have a yellow lip and don't often fully open, but open more than its close relative, the White Helleborine. More about those in a minute! 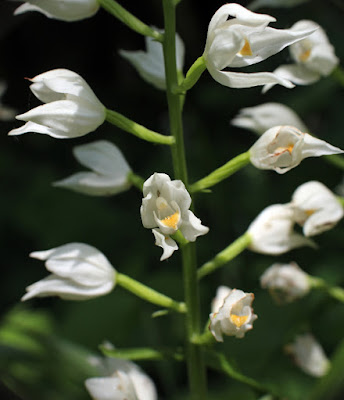 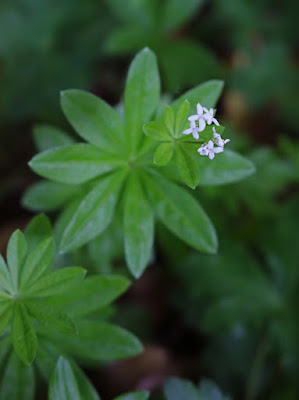 I take photos of the everyday flowers as well, like this Woodruff, an attractive woodlant plant which, unlike its Bedstraw cousins in the open, have a lovely scent. 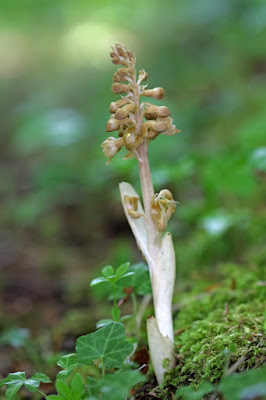 In a few places were clumps of Birdsnest Orchids which have no green leaves at all and don't need sunlight. Hence you tend to find them in deep shade under Beech or Yew trees on which they have a symbiotic type of relationship. It's actually a menage a trois as the third party is a soil fungus. Without them, the orchid won't germinate and survive. 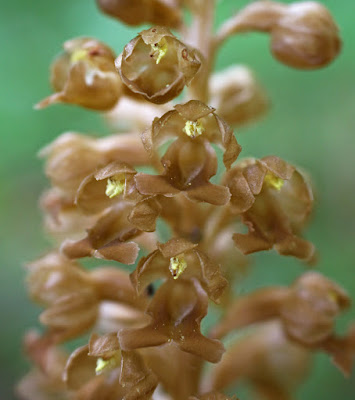 Here's a close up of the rather drab flowers, but in the shade, the bright yellow pollen on the anthers glint like golden specks on the woodland floor. When we've taken our grandchildren to see them in the past, one of them said "Are we going to see the dead flowers today?" Quite apt really, but a fascinating plant nonetheless. 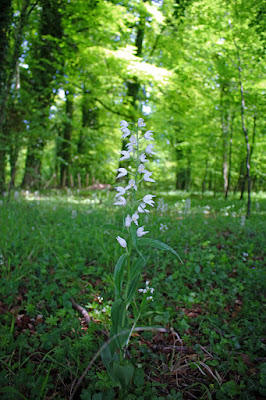 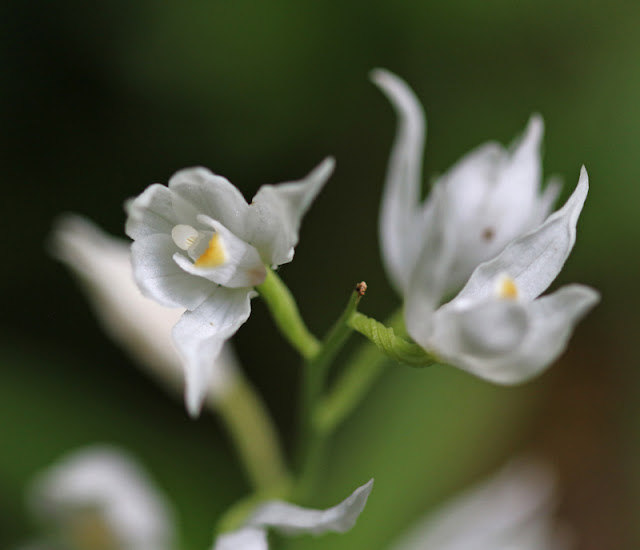 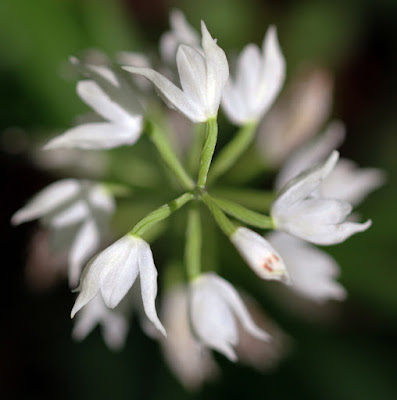 There were plenty of Fly Orchids as well but all in deep shade making a decent photo difficult to get.

We stayed for about an hour and a half then moved on. My partner took a photo of a Sword-leaved Helleborine from above on her camera and it looked great, so I copied her artistic lead, here's my attempt!

From here we drove South to visit Hayling Island. We'd not been there before and it was easy and quick to get there. 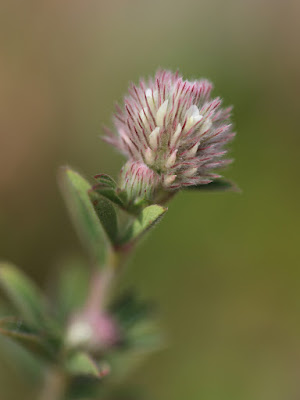 Hayling Island has a small area of old sand dunes on the seashore and inland a bit, a large tidal harbour both with different flora to be found.

I started off on the compacted dunes of the seafront where we also enjoyed an ice cream! 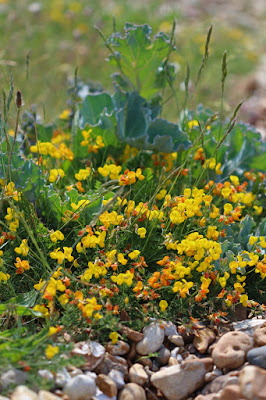 This photo of Common Birdsfoot Trefoil shows a typical shingle beach scene with Wild Cabbage grasses and plantains abundant as well. Beaches come alive with flowers from now until August. 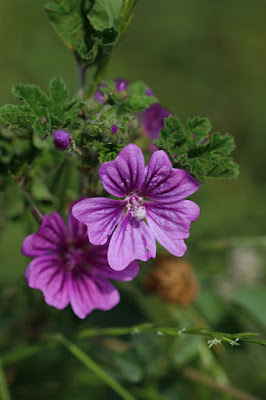 From none to hundreds, the Common Mallow (pictured) has come into flower all over the area, virtually all at the same time. On beaches you may also come across Tree Mallow, which as the name suggests grows much like a woody tree trunk and can be over 6 feet tall. The flowers also have a deep mauve centre, making it easy to tell the two species apart as some Common Mallow can be very tall as well. 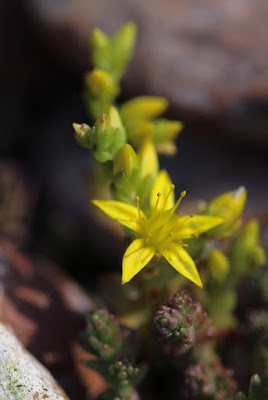 On the firmer areas with little soil grew Stonecrops which are now flowering. This one is the Biting Stonecrop, so called I think, because it had a bitter taste in the days when folk used to eat wildflowers. In a week or so there will be golden carpets of these, but here only a few had open flowers. 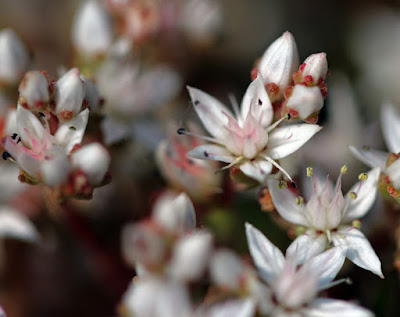 The other was English Stonecrop, a small, mat forming plant with white/pink flowers. They are quite similar to White Stonecrop, but the latter have many branched stems with 20+  flowers on each plant and lack the tinge of pink. There are other differences, but I'll leave you to look those up if you find any! 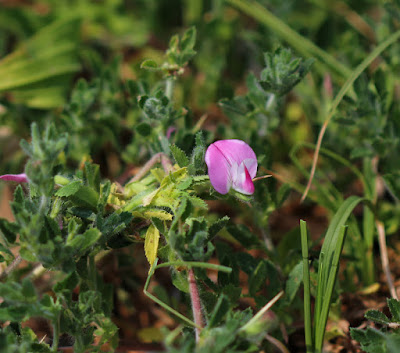 This is a Common Restharrow, so called as mats of the plants used to jam up the harrow pulled by horses. They were a pest to farmers in those days, but now virtually eradicated from most fields with weedkillers.

However, they are common in beach areas, such as here. Their flowers look like a rhino horn and their leaves smell like gone off lemons if crushed as they are covered in tiny glandular hairs. 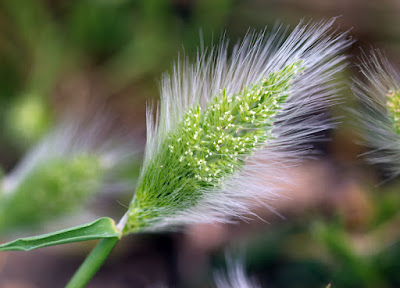 One area was covered in these white bristle tipped grasses, and in the breeze it looked like moving ripples of fluffy cotton. 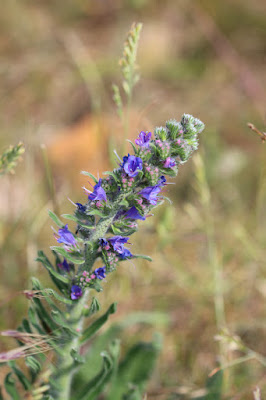 The flowers on Viper's Bugloss always demand attention even though it's a common plant. The blues,pink and purples combine to make an attractive wildflower. Often found on beach areas they are also common inland on road verges and arable fields. 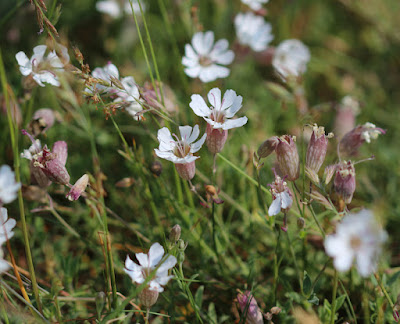 Another beachfront plant is the Sea Campion. At first they can be mistaken for Bladder Campion, but there's only ever one flower per stem, hence the last part of its scientifc name! 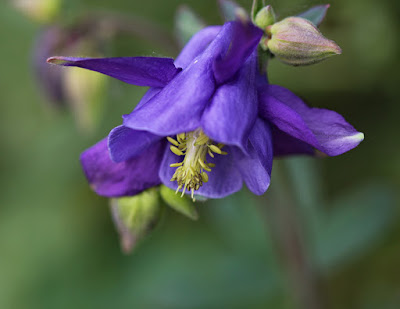 There was a nice stand of Columbine still in fine flower, though they have all gone to seed in Kent now. This was a native plant with strongly hooked spurs and a nice blue colour, but there are also plenty of garden escapes in all sorts of colour forms in the wild now as well. They mostly have long straight spurs behind the flower. 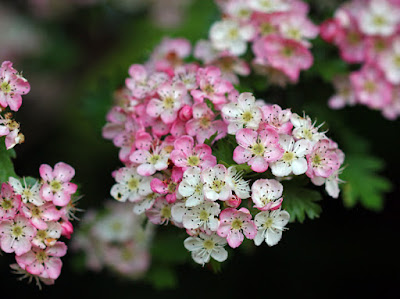 When out looking at flowers, don't forget to look up occassionally or you'll miss something like this wonderfully coloured Hawthorn tree in bloom. Florets are usually white, but sometimes you see a pink form. 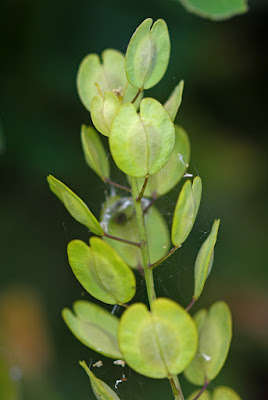 This is Field Pennycress in seed, it was an odd find by the sea wall as it's usually found in arable fields. Unmistakable given the size and shape of the seeds.


From here we headed back inland and got stuck in the afternoon rush hour on the A27. We drove to a Sussex Wildlife reserve near Pulborough on the way back, so into Sussex and a bit nearer to home.

Here, there is large slope of chalk grassland, perfect for orchids. I had visited here last year and saw a fantastic display of Common Spotted Orchids and more. This year, everything was at least 2 weeks behind and not much was out yet, most still in bud.

There were a few Common Spotted Orchids coming into flower, by mid June there will an explosion of colour from these delightful orchids here.

There were numerous Fly Orchids as well, this time growing out in the open in the short turf. They don't tolerate competition from bigger plants, so grazing or habitat management is essential or they will die out.

I thought this was a freshly emerged 6 Spot Burnet but later discovered it was a Narrow-bordered 5 Spot Burnet moth, one I've not seen or possibly noticed before, thinking they were all 6 spots!

The first Common Gromwell flowers were out here, a common plant on chalk turf habitats. It's quite a big plant, but the flowers are small and off white, so not terribly impressive!

Here's another orchid now long gone from Kent, unless some lucky person finds a new colony. It's the Frog Orchid, so called as the florets can look like a jumping frog - but you need to use your imagination to see it!

There are plenty of Bee Orchids at this site, but they weren't out yet. This one was though, a rare variety that lacks most of its red pigments with white instead of lilac sepals.

So ended a lovely day out. It made a nice change to leave the Kent area and explore new areas, though we both found it a very tiring day, especially the long drive there and back!

It's peak time for wildflowers now, get out there and find some and post  your photos to me on Twitter @Barbus59
If you're stuck for an ID, I'm only too pleased to try and help and if I can't there's plenty of people I can retweet to that will know.