- June 08, 2016
In 2013 I stumbled on a small patch of chalk grassland above an arable field between Great Buckland and Luddesdown. It was a wonderful mini habitat of the usual numerous wildflower species of chalk grassland and its associated butterflies and beetles.
The revisiting of the site and nearby today was relatively brief just to see what was still there. 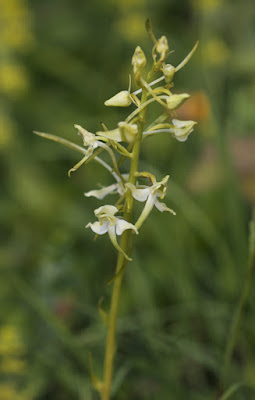 This site is seriously scrubbing over and in a few years will be gone under a sea of Hawthorn and large shrubs. So my main purpose was to see if a small colony of Greater Butterfly Orchids were hanging on.

I was pleased to see they were with 10 flowering plants there, the same number as previous years. 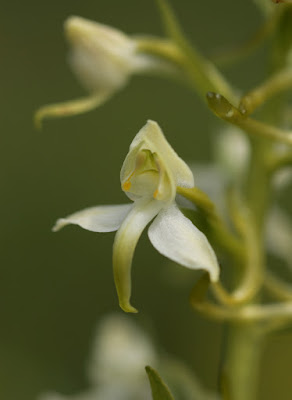 This orchid is distinguished from the Lesser Butterfly in having the pollinia angled to each other. In the Lesser they are parallel. 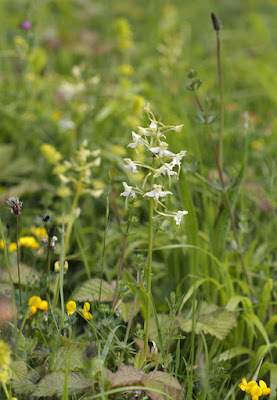 The orchids here were not very tall and you can see the brambles beginning to invade their space. If unchecked these will be swamped soon. 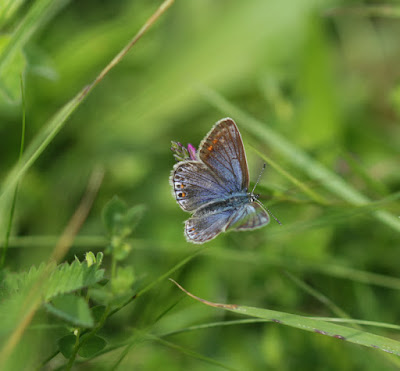 Several blue butterflies were on the wing. I finally got a photo of a female Common Blue, always delightful to see flitting around the flowers. 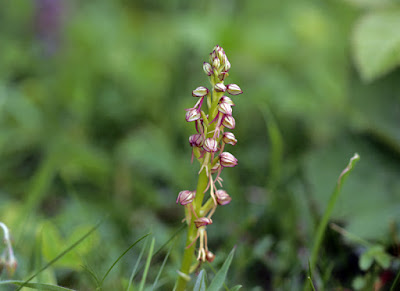 The next special plant was the Man Orchid, another threatened wildflower. These hadn't fared as well as the Greater Butterflies in that numbers were down from 30 plus in 2013 to 9 this year. Scrub covered where they used to grow. 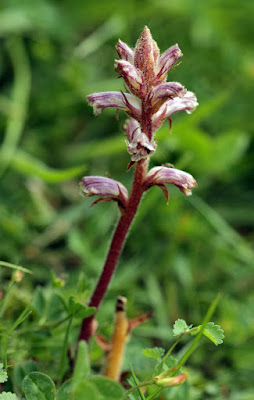 This is a Common Broomrape that some beginners may think is an orchid as it has flowers coming off a single spike. It's not related at all and is in fact parasitic on a variety of plants, in this case assorted clovers.

This is the usual colouring but I have seen them virtually all yellow as well, a strange looking plant but one I love to find. Always check out the plant closest to where the stem enters the ground and that is its likely host. It makes it easier then to identify rarer species that only grow off particular plants. 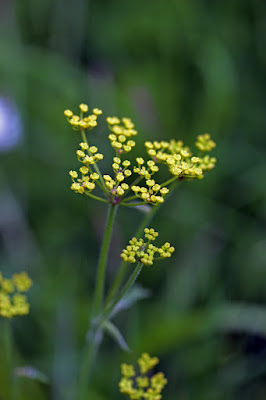 I was a bit surprised to find Wild Parsnip in flower, a good month early, given that many plants are 2 weeks or so late due to the cold Spring we've had here. This is the only yellow umbellifer with big opposite toothed leaves. 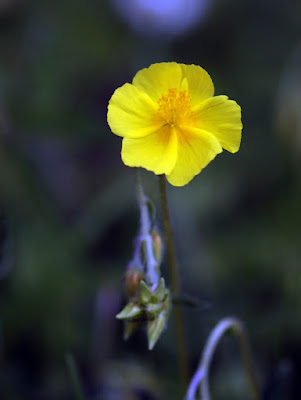 Common Rockrose formed mats in the poorer soils of the slope, another plant once very common, now declining so rapidly it has made it on to the Kent Rare Plant Register. The main decline for many species is the loss of chalk grassland at an astonishing rate. Many are built on or ploughed, or like this site, scrubbed over by neglect. 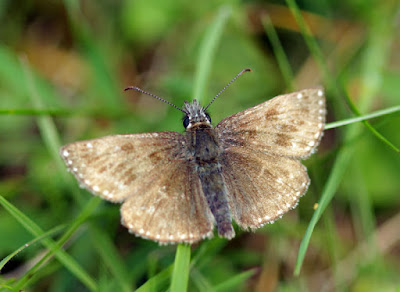 Another welcome butterfly distraction was the Dingy Skipper shown here. I also saw a Grizzled Skipper which is more attractive, but didn't manage to get a photo. 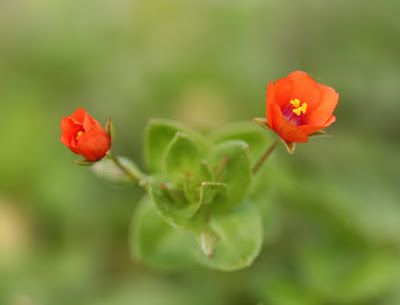 I then left this small chalk grassland habitat and walked the arable field edge. The soil was so thin, it was really bare chalk, broken up by the farmer into small pieces. Thankfully, no recent weedkillers had been put down here and it was nice to look for arable rarities here. This isn't a rarity but nice to see, the Scarlet Pimpernel. 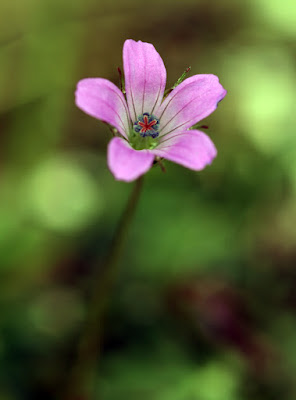 This flower caught my eye as it had a very long stalk so it must be, and was, a Long-stalked Cranesbill. They look much like Cut-leaved Cranesbills at first, but the long flower stalk is a real giveaway! 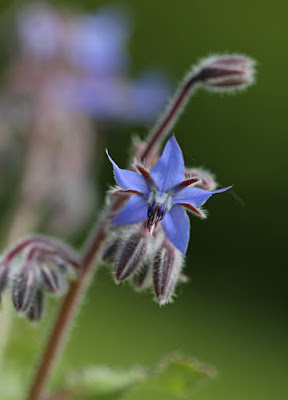 I wonder if the farmer had a crop of Borage in this field last year? This was a single flowering plant about 10 metres into the field itself. Often found near houses as a garden escape, but not possible in this situation. 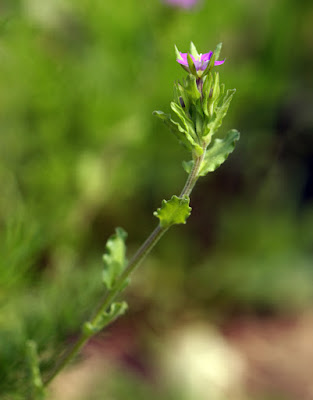 I then found many of these tiny flowers, the whole plant being about 6" tall. I'd only seen these before at Ranscombe Farm and was very pleased to find a new colony of Venus Looking Glass. 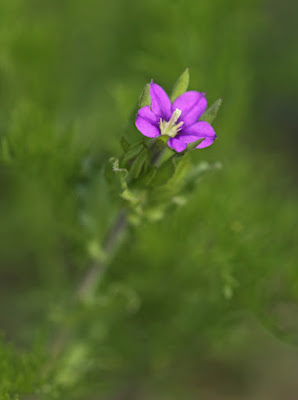 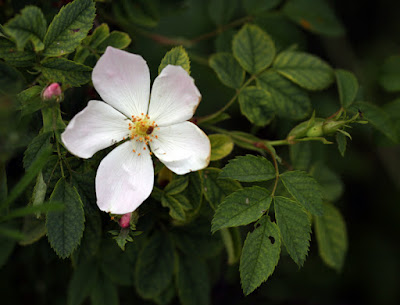 I came to an area fairly barren of arable plants so I looked the other way onto the hedgerow and found the first of the Springs' Dog Roses in flower. A lovely delicate pink, rather washed out by the hot bright sun overhead. 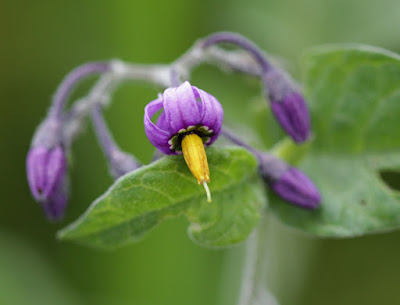 Bittersweet, or Woody Nightshade was present as well, with the green, purple and yellow making a wonderful colour contrast scene.
By the way, these are not Deadly Nightshade which actually looks totally different! however, should you decide to eat some, you will still get a very unpleasant experience. Poisonous but not deadly! 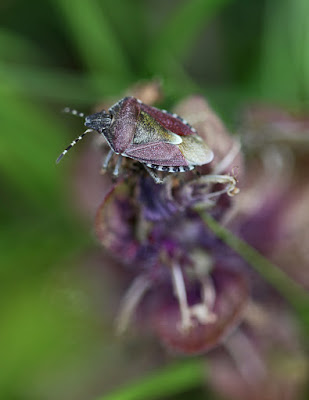 I love Shieldbugs, I think they're fascinating. Most have several life stages and a single species can look totally different through each stage!

This is an adult Hairy Shieldbug, sometimes called a Sloe Shieldbug after the Sloe fruits of the Blackthorn on which it can frequent. 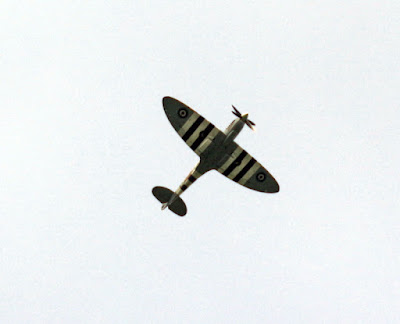 A loud throbbing Merlin engine distracted me for a while, a Spitfire looping the loop over my head. 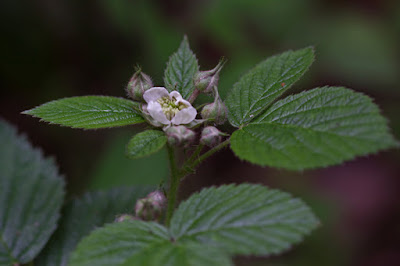 I then entered some woodland and noticed some brambles that weren't really brambles at all! These had 3 leaflets instead of 5 and were a paler brighter green thaan  most brambles.

It's a Raspberry, a native plant of woodlands. The flowers are rather poor affairs compared to brambles and this was the best one of a bunch!
The berries are lovely though when ripe! 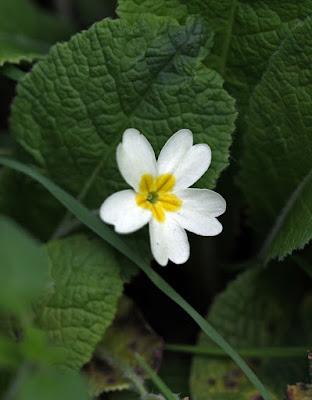 I came into a large clearing and saw several Primrose still in flower. Proof, if any were needed, of our long cold Spring. They should all be in seed now at the end of May. 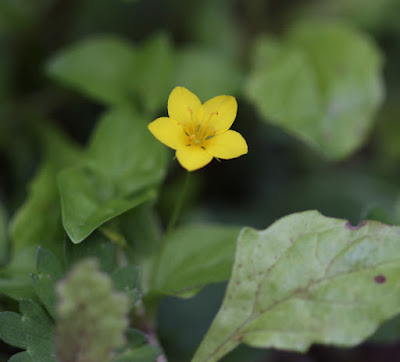 This is the Yellow Pimpernel, a woodland plant that likes a bit of shade. The flower is much larger than Scarlet Pimpernel and is solitary on a longish stalk. The paired opposite leaves are pointed. The similar Creeping Jenny has rounded leaves and flowers later. 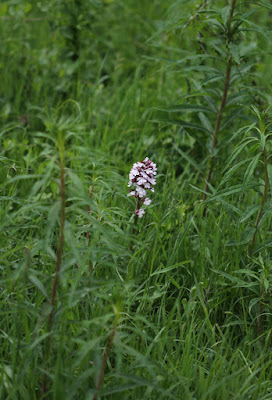 As the clearing enlarged I saw this ahead of me. Then I found another two. 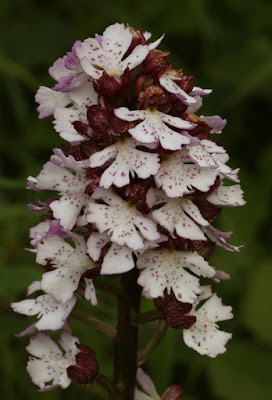 Yes, they are the stunning Lady Orchids. Known from this area, but still a delight to find off of a nature reserve. 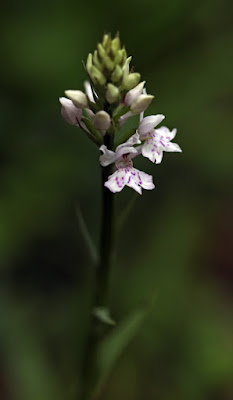 There were about 50 or so Common Spotted Orchids around, some in bud, but most still rosettes, quite late flowering this year. 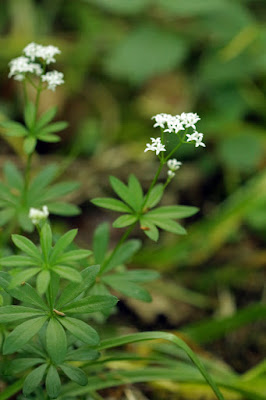 In the deeper shade of the woodland edge were populations of Woodruff, all now in flower with their lovely scent. 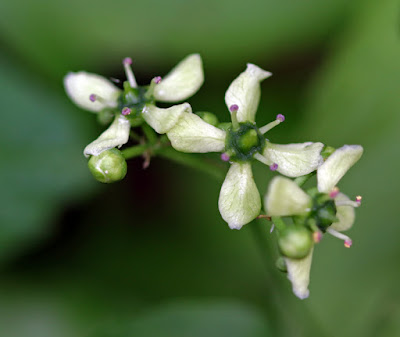 My final photo was of the Spindle, a small native tree, often found in hedgerows. The flowers are pale yellow to white and very small. They are better known for their vivid orange and pink seeds in late Summer.


Euonymus europaeus
It would be fantastic if the first site I mentioned was managed and cleared of scrub before it's too late, but alas I can't get anyones' attention despite emailing a few wildlife organisations. I have no idea who the landowner might be as there is no habitation anywhere nearby. I wish I could buy it, along with the adjoining arable field (and a tractor)!