Dungeness and the surrounding areas are a special place for wildflowers and wildlife and as such the area forms a National Nature Reserve. There are vast areas of shingle jutting out several miles into the English Channel off the South Kent coast, formed from depositions over thousands of years. 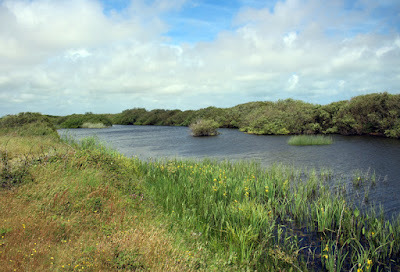 Not much rain falls here compared to other areas and it is the only desert in England, however, the water table here isn't far down and excavations of sand and shingle over the years has left lakes and ponds scattered over the landscape. Most of the larger lakes are on the RSPB reserve to the North of Dungeness.


I had come here today to find the Marsh Cinquefoil, a rare plant in Kent that I'd never seen. I had good directions from the Romney Marsh Ranger @LeyshonOwen and knew they were in flower.
It's still a fair trek across difficult terrain though. 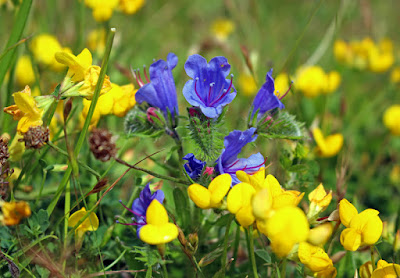 There were plenty of wildflowers to look at on the way as well, like this Vipers' Bugloss amid a carpet of Birdsfoot Trefoil, a lovely combination of colours. 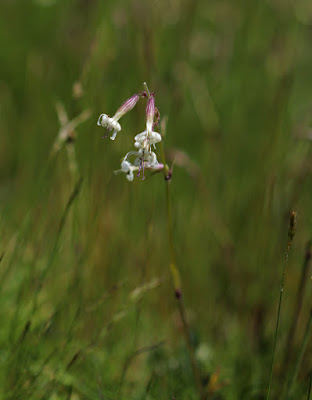 Another rare plant for Kent is the Nottingham Catchfly. It's a sticky, glandular hairy plant with rolled up petals. These open out as daylight falls and are pollinated by moths I would imagine. 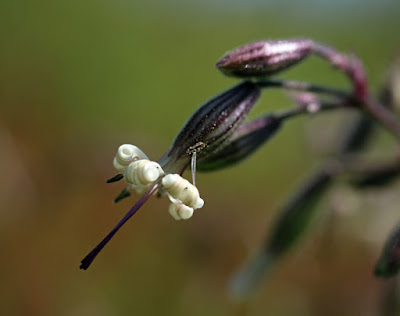 
They are closely related to Campions and can be found here in their thousands. 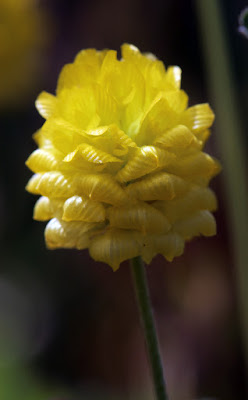 Clover and Trefoils were abundant and though I looked hard, I couldn't find any rarities. However, the Hop Trefoil is majesty in miniature, resembling a tiny yellow hop flower. 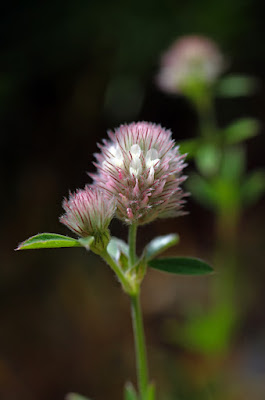 Another little beauty were mats of Haresfoot Clover with its purple softly hairy bracts and tiny white flowers within them. 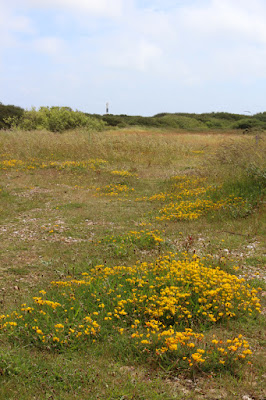 As we walked along the shingle ridges carpets of Birdsfoot Trefoils added colour to the grasses.
Even the sun came out to brighten up the scene. 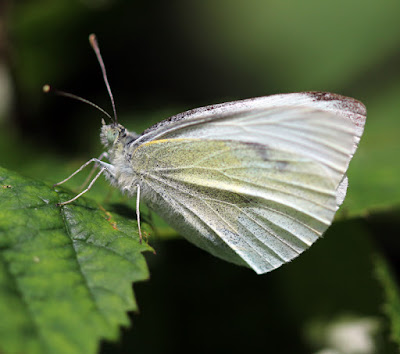 Butterflies were plentiful, though as is often the case, I didn't get close enough to photograph most of them!

This is the Large White Butterfly. 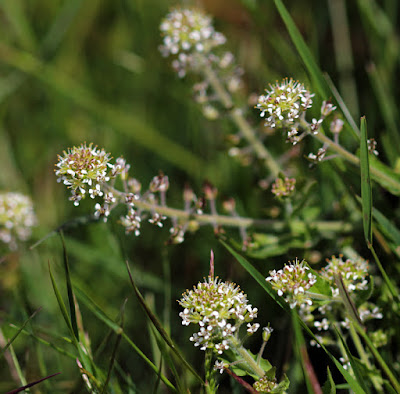 In the grasses I saw the occassional
odd looking flower, quite small and sprawling. It's 4 petalled flowers in keeping with the Cabbage Family it belongs to.
This was a Smith's Pepperwort which I'd seen in Hampshire recently, but hadn't seen in Kent before. 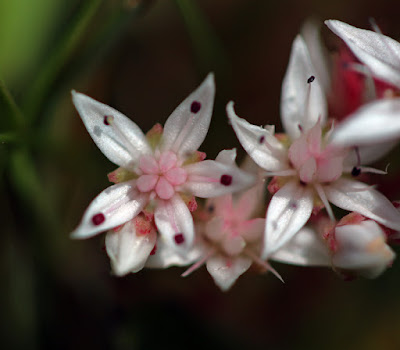 Stonecrops do well on the shingle and thin soils here, as they do on walls and old concrete of brownfield sites inland.
This is English Stonecrop with its shade of pink in the petals and few flowers on each low growing stem. This differentiates it from the taller, umbel like flowers of White Stonecrop, which as the name suggests lacks the pink tinge as well. 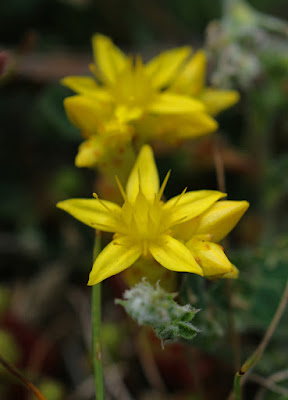 The other Stonecrop here was Biting Stonecrop with its dazzlingly bright yellow flowers forming carpets of yellow wherever they occur.

Reflexed Stonecrop was also nearby but only in bud as yet. 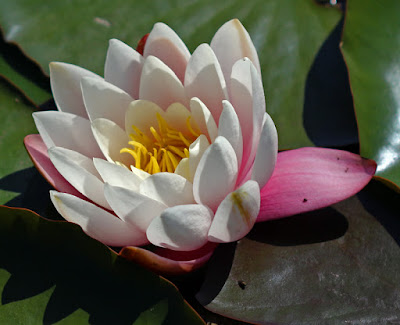 In the lakes themselves were these stunning White Waterlillies which I had always thought were introduced, but apparently they are native to England. 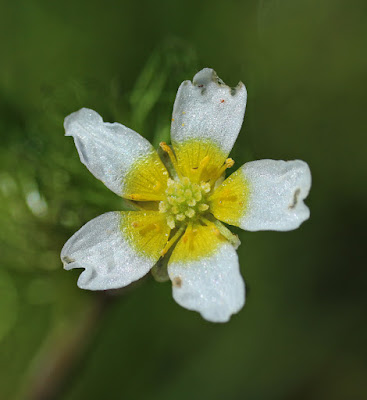 In the margins of the lake I found several Water Crowfoot in flower. These can be tricky to identify as many have floating and submerged leaves. This one just had submerged weeds and luckily I photographed them to discover it was a Fan-leaved Water Crowfoot, determined by the thin leaves branching only twice at each junction. Half moon honey guides (in the yellow parts) also identified it as this, plus it was in fresh water and not brackish water. 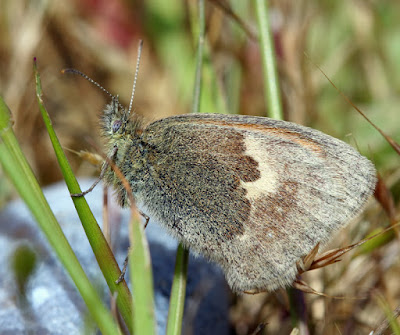 Several Small Heath butterflies flitted about. I managed this photo but unfortunately it closed its wings, hiding the lovely orange markings it usually shows on the fore wings. 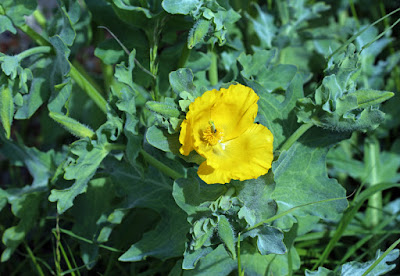 Here and there were the big yellow flowers of the Yellow Horned Poppy, usually found on coastal shingle beaches, however, this beach extended a few miles inland as well! 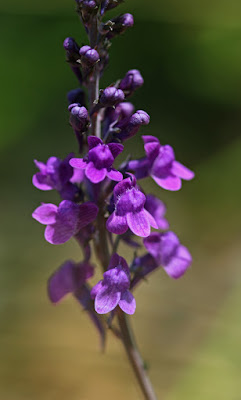 Purple Toadflax is an alien species, escaped into the wild many years ago. However, it does not seem to have any adverse effects on other wildlife. It grows in a slim tall spike with small strap shaped leaves up the stem, so it doesn't shade or crowd out other plants. Some years ago, this species seeded itself from the wind into my patio pots in my garden, and I've had them ever since. 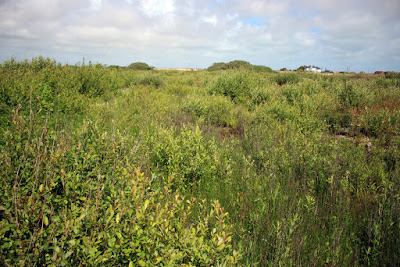 We then came to the area Owen said the Marsh Cinquefoils could be found. I'd never have thought of looking here without his help as it's hidden from any path in acres of dry shingle ridges.

It's a shallow gulley that just reaches the water table, causing it to be permanently damp. As such, there were many marsh plants to be found here. 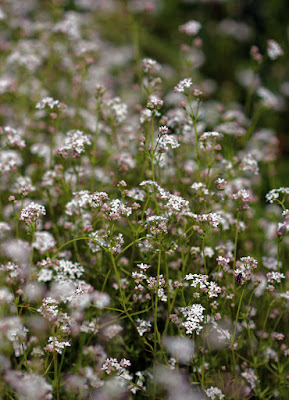 Thousands of Marsh Bedstraw couldn't fail to catch the eye. Their leaves (and habitat) differentiate them from similar Bedstraws with them having forward facing prickles and a blunt leaf tip (no bristle points). 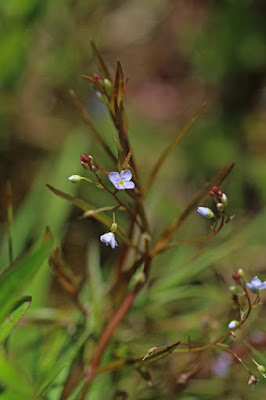 I then found a Speedwell in good numbers, that I hadn't seen before, so had to look it up later. It's Blue Water Speedwell, with distinctive dull green strap shaped leaves and small blue speedwell flowers. 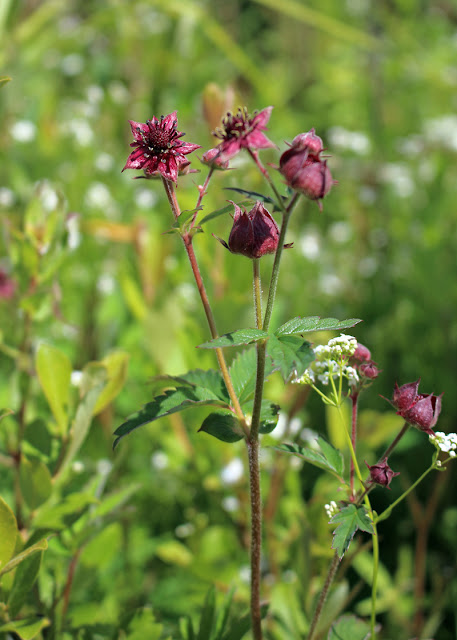 And then, there they were. Several clumps of Marsh Cinquefoil, a beautifully coloured flower and member of the Rose Family.

While more common the further West you go, they are really quite rare in the South East. This colony is the first time it's been seen here in the last 35 years and follows scrub and willow clearance form this wet shingle slack. 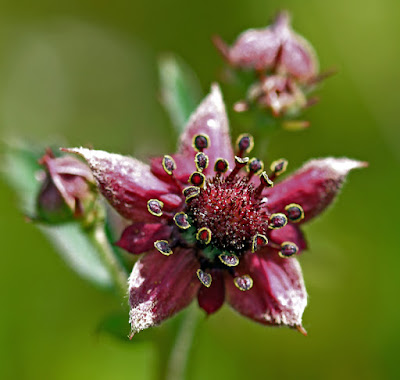 These wonderful things happen because volunteers give up their time to improve habitats to bring diversity back to the areas they love and live in. Why not do the same where you live and see what flowers the following year? 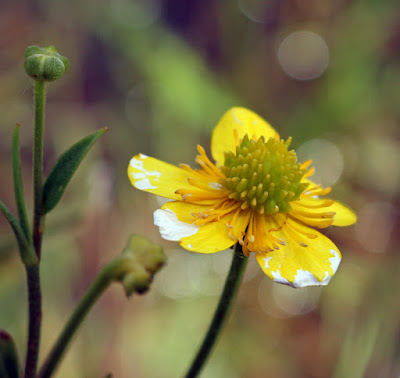 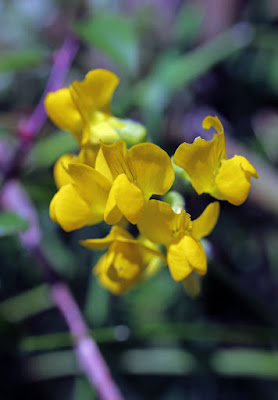 So we headed back to the car, and I photographed this Meadow Vetchling along the way, distinguished by the leaves being grass like, completely unlike most other Vetch type plants. 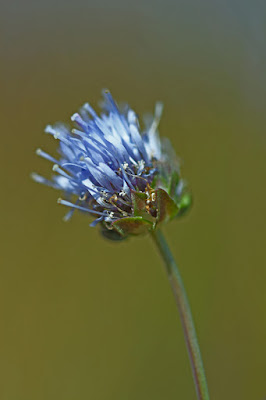 This is the final plant I photographed here, but had to drive around the ponds a couple of miles to see it, Sheep's Bit. Another uncommon plant in Kent, it's only a few inches tall and is quite happy on thin soils.
In Wales recently it was growing in cracks in slate cliffs and in rockfall areas on acid soils in the Welsh hills. I guess that's how it got montana in its name.. 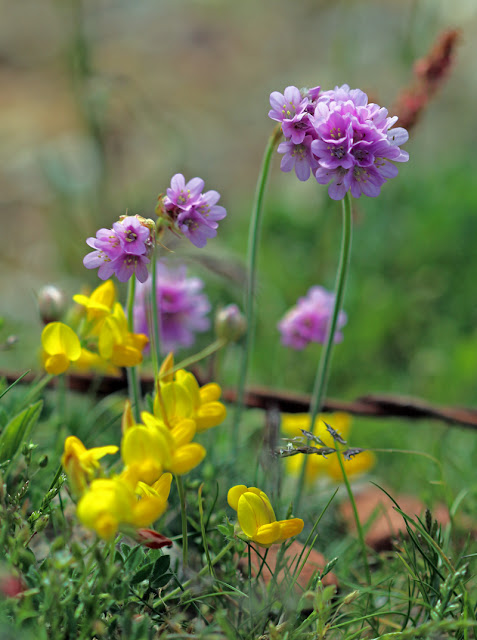 From here we drove to Dengemarsh, miles by road but about a mile or so in a straight line from where we were earlier.

This borders a military area and farming is limited here. Of course, the closer to the sea you go, the less soil there is.

Thrift thrived along this road verge. I particularly liked this photo of it with Birdsfoot Trefoil and the military barbed wire of the perimeter fence just behind it. 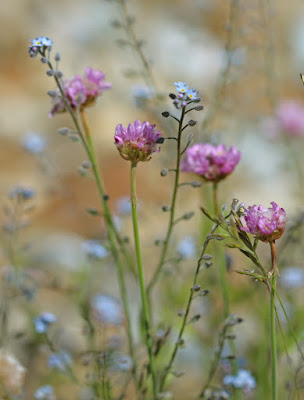 Thrift also grew amongst Forget-me-nots, though I didn't examine them closely to determine which species they were. 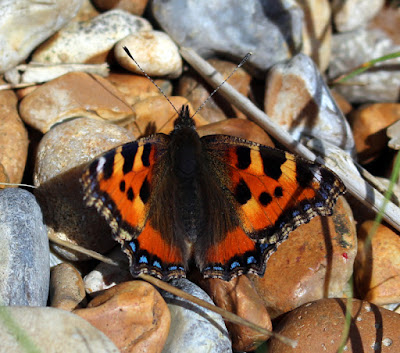 A Small Tortoiseshell Butterfly posed for me on the warm shingle. Being first landfall from France for many butterfly and moth migrants, you never quite know what rare or unusual species might turn up, I'll keep my eyes open! 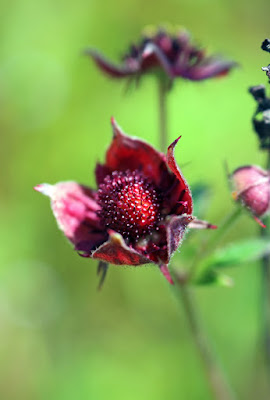 So ended our trip to a fantastic place where there are always exciting wildlife species to see, be it wildflowers, insects, amphibians, birds or mammals (including dolphins). There's even a great display of unusual fungi in the Autumn, especially by the RH&DR railway station at Dungeness itself.


I'll leave you with another Thrift photo (below), an iconic coastal plant often planted inland in rock gardens or in pea shingle pots. 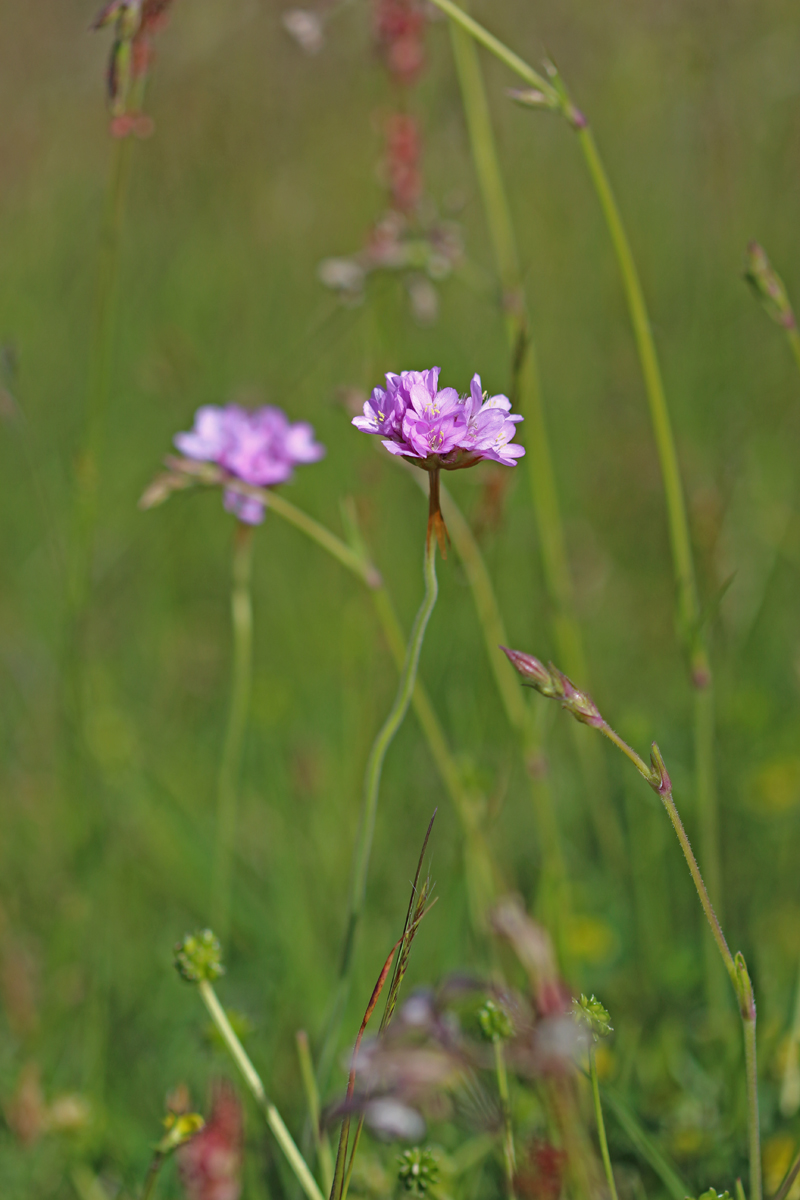