- June 12, 2016
After leaving Holborough (see previous blog) there was still plenty of daylight left to explore elsewhere. I hadn't been to the Larches for a while so headed there. It's a KWT reserve near the A249 Detling Hill and comprises a mix of woodland and grass meadows on a steep chalk scarp slope. 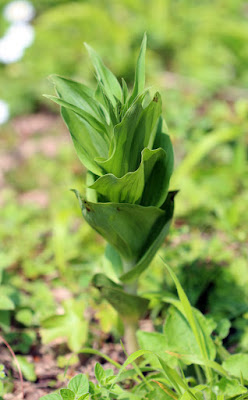 I couldn't find anything of note in the woods such as Birdsnest Orchid or Yellow Birdsnest that I have found there in the past so I headed into the lower meadow.

In a month or so there will be a fantastic display of Broad-leaved Helleborines here. As you can see from the photo, they've some way to go until they flower. 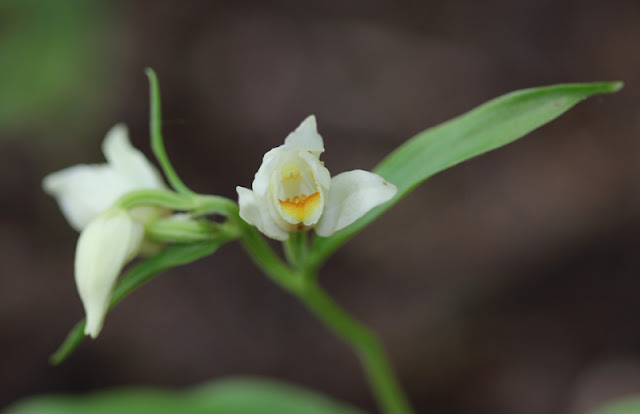 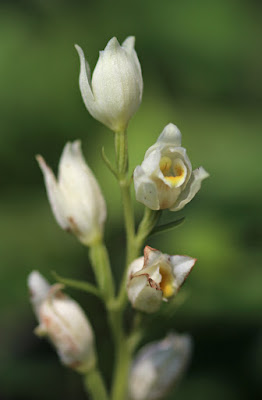 Under some Beech trees at the top of this meadow were a multitude of White Helleborines, an uncommon wild orchid. They rarely open to show much of the yellow lip and look like small tulips that grow in the shade.

So I was lucky to find several nicely open flowers and shafts of sunlight filtered through the canopy illuminating them. 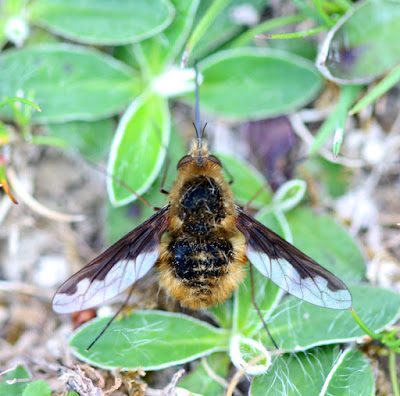 From here I went up to the higher meadow which is more species rich on short chalk turf. Here, I found a Bee Fly, a Springtime insect which will all be gone soon, until next year. 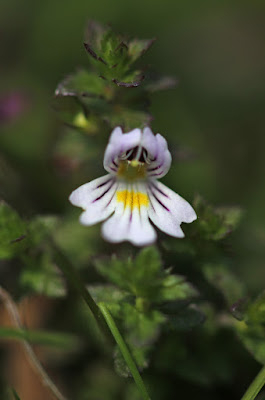 This is a Common Eyebright and was the only one I could find in flower. They are very tricky to identify, but if you live in or near Kent I can recommend the Kent Botanical Recording Groups key to them, click this link -
Euphrasia Key - Kent 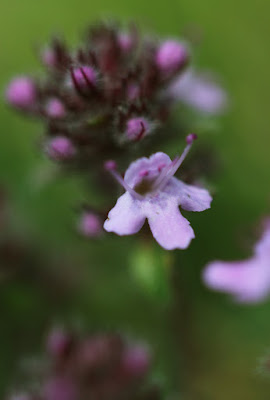 Another tiny flower just blooming now is Wild Thyme. These are quite tiny and form mats of purple flowers. The foliage when crushed gives off only a slight Thyme smell. 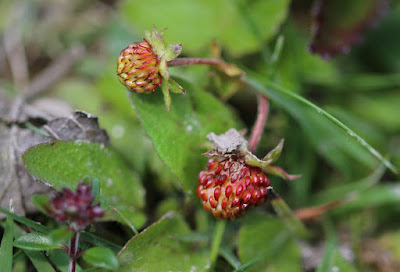 Wild Strawberries were abundant, most still in flower, but some now going to fruit, just like those in the shops but 20 times smaller! 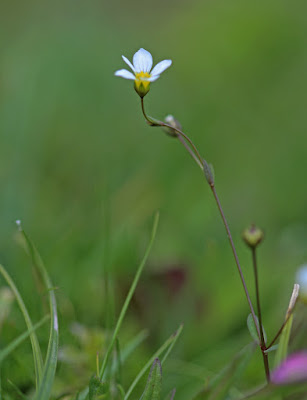 The tiny Fairy Flax was starting to become abundant in the turf, their stems often weave through grasses and other plants with their tiny flower poking through them. 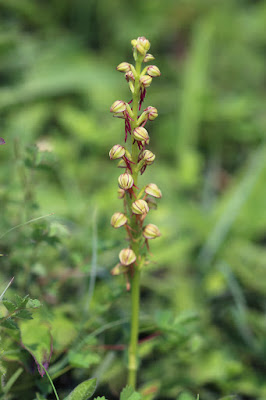 Right by the path was a single small Man Orchid, much smaller than those found on better soils. I had been keeping an eye out for Musk Orchids, usually around 6" tall. I didn't find any, but this 6" Man Orchid had me going until I looked closer! The final plant I photographed here was this Heath Speedwell. Different to the other Speedwells in that the leaves are elliptical and toothed often in a large rosette, with flower spikes poking up with numerous pink tinged flowers on them. 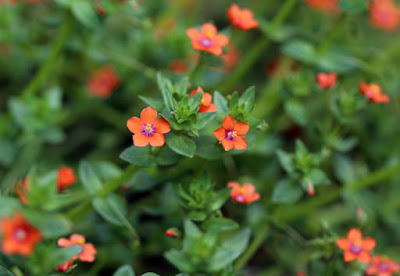 As I returned to the woods, I found a rcently cleared area abundant with "weeds" such as Wild Mignonette, Thistles and these lovely Scarlet Pimpernels. 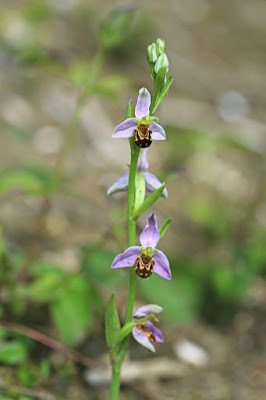 Also in this clearing was this beautiful Bee Orchid, a fine example with multiple flowers.

That was about it for the Larches, but there will be much more to see there in a few weeks time.

From here I drove a short distance up the A249 to near Stockbury where there is a Roadside Nature Reserve. 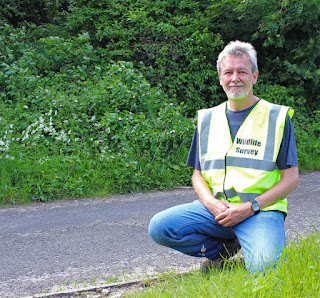 When anywhere near a busy road I wear my reflective vest. It's got "Wildlife Survey" in big black letters on the reverse as well, but you can get anything printed on them for just over £5 on Ebay. 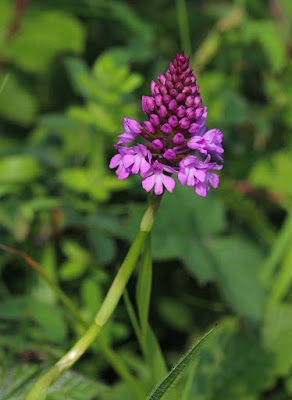 These Pyramidal Orchids were just coming into flower. I had to be careful where I trod as hundreds were coming up in bud, so it looks like a good year for this species. About 1 in every 1000 you get an all white variant, worth keeping an eye out for in the coming weeks. 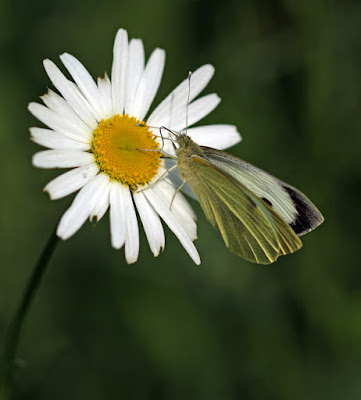 There were a lot of butterflies here, attracted by the swathes of wildflowers, like this Large White on an Ox-eye Daisy

Then this stunning Painted Lady posed for me, a migrant from North Africa no less!

I also saw the first Large Skipper of the season, but failed to take it's photograph. 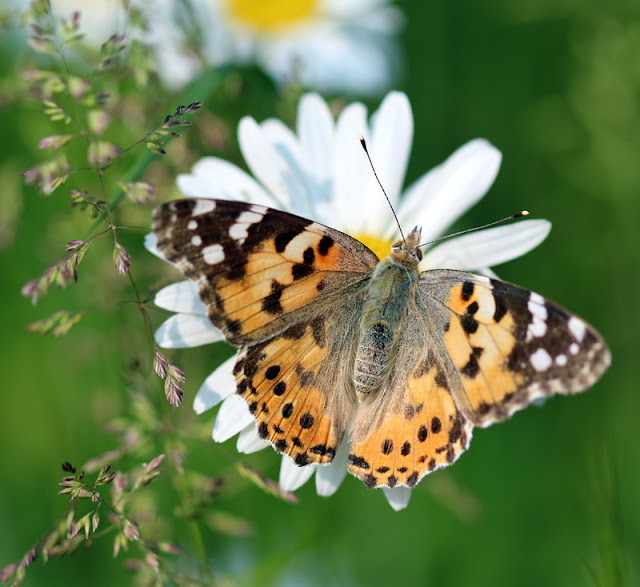 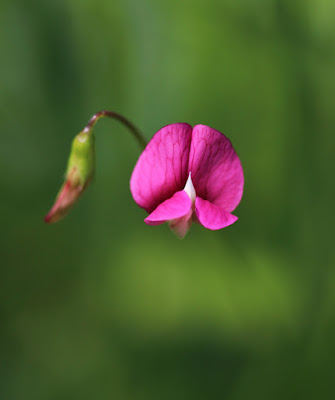 Hidden amongst the long grass stems were numerous bright pink/purple Grass Vetchlings, a delicate pea like flower on a long stem. Unlike other Vetches these have a grass like stem and leaves. When not in flower, they're not noticable in the grasses at all! 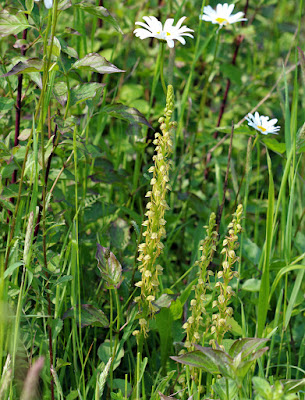 I was surprised to find over 20 Man Orchids here, much bigger than the single one found earlier at The Larches. I'd not seen them here in previous years. 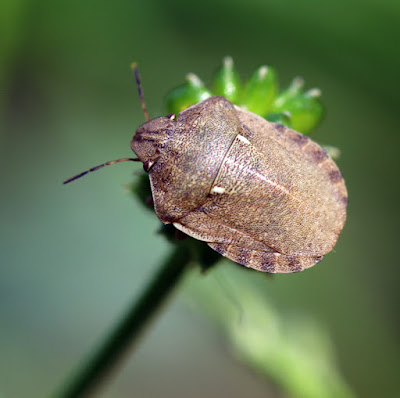 The final photograph before I headed home was this lovely Tortoise Shieldbug.

I didn't plan on going to reserves today, but it was nice to resvisit some old haunts, there's always something to see.