- June 09, 2016
I had visited three venues this day, but the blog would become far too long if all of them were combined, so I have split them up for easier reading. 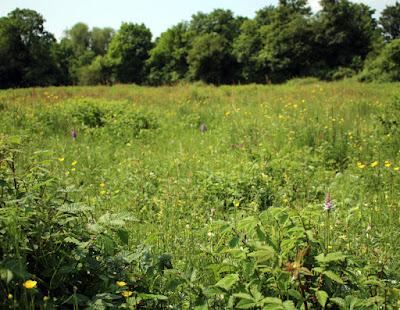 I had planned to revisit the Kent Wildlife Trust Holborough reserve again as the orchids there should be at their best now. Being a wet alkaline fen like environment it is a very rare habitat and I also wanted to see what else I could find there. 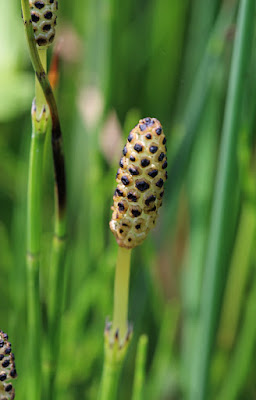 At first glance I thought these were Field Horsetail, but the leaves have a rather different arrangement, the teeth along the stem and the flowering time is different (though they aren't technically flowers).

It's Water Horsetail, a fern. 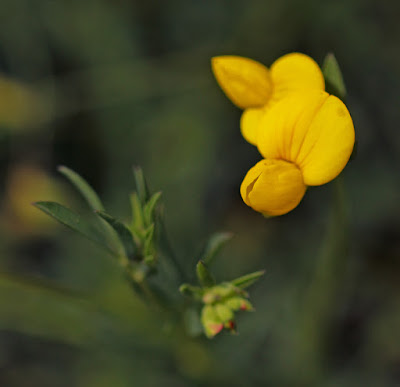 Not a brilliant photo in the bright sun, but this is the first Meadow Vetchling coming into flower, there's a lot of it here. It differs from the trefoils/birdsfoot in having grass like leaves. 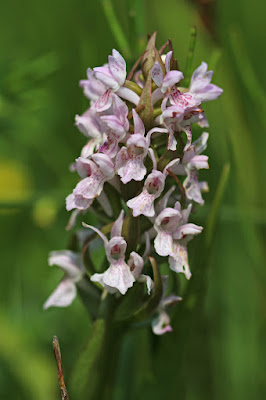 I soon came to one of the orchids I wanted to see. This is the Early Marsh Orchid, of which there are 3 varieties or sub species. Only this pale form is found in Kent.

My previous visit was only a couple of weeks ago and not a single one could be found, yet now there were over 100 in this and the adjoining meadows. A beautiful sight. 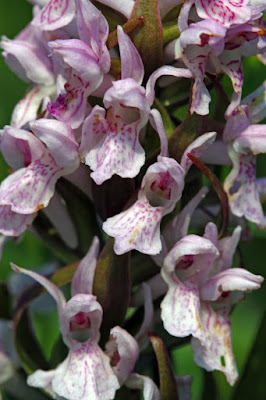 Their flowers are smaller and more delicate than Southern Marsh (also found here) and mostly very pale. The spots are usually contained within joined up loops and the lower petal lobes are often folded back behind the flower, making the flowers appear narrow.

Leaves are hooded at their tips and unspotted in Kent, another helpful tip in identifying them. 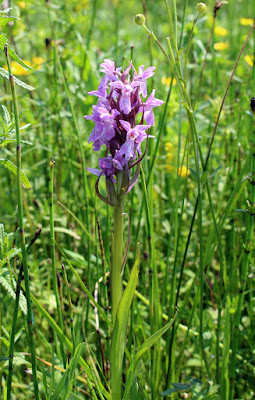 I then found a hybrid orchid. This is a cross between the Early Marsh and the Southern Marsh Orchid. Apart from being pink it looks similar to an Early Marsh, though the petals lacked joined up loops and the colour is a real giveaway in Kent where the red colour form of Early Marsh Orchid does not occur.

The D. stands for Dactylorhiza 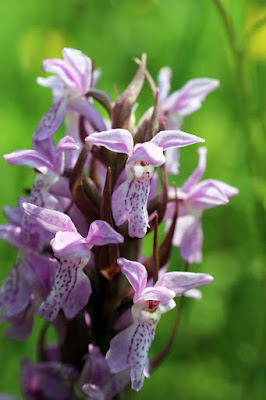 It even had purple dots on the upper petals, quite odd looking. The leaves were not hooded either. 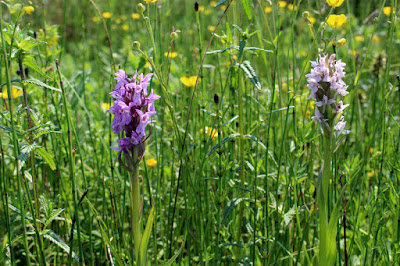 This last photo shows the hybrid next to a "normal" Early Marsh Orchid. 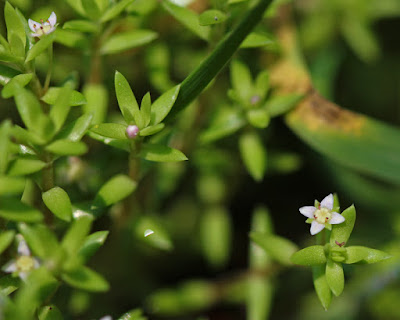 In one ditch were mats of this invasive plant, the New Zealand Pigmyweed. It can clog up reservoirs (such as Bough Beech) but in smaller habitats more bio diverse, studies have shown it has not had much impact on native flora. 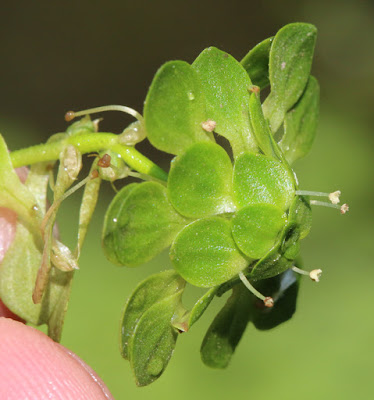 Further along the ditch were mats of Water Starwort with tiny flowers catching the sun, and I mean tiny!

The plants form mats under and above the water surface. You can see there aren't any petals, just a few stamens with pollen filled anthers on the end poking up. There are a few species of these that are very hard to distinguish between and I won't try just yet! 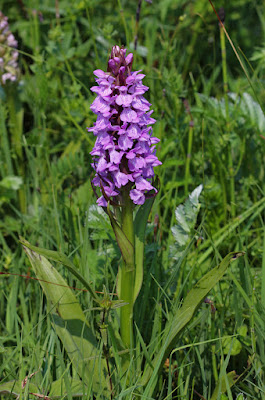 Next up were some of the impressive Southern Marsh Orchids found here. Much bigger and more showy than the Early Marsh with pink to purple hued flowers. 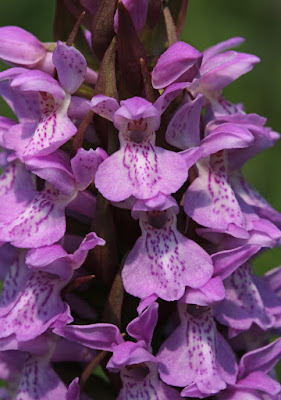 Here you can see the dots along the centre of the flower with the loops not joined up. The lower petal is strongly keeled with wider wings poking out sideways which the Early Marsh doesn't have (they are folded back on those). 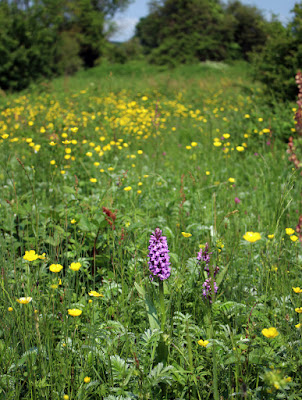 Obviously I am trying to simplify the differences in these orchids, but I hope it gives you a pointer for you to study when you find them

It was quite hot and sunny, and I paused a while to take it all in, it was a privelege to be here and see this. 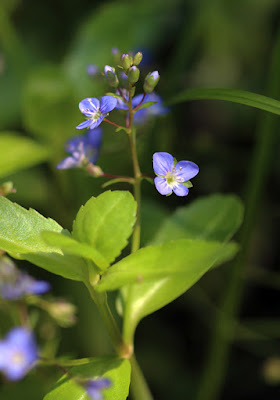 Brooklime was abundant. It's a Speedwell type of flower that thrives in damp alkaline places such as here. It is far bigger than most other blue Speedwells with fleshy toothed oval leaves. 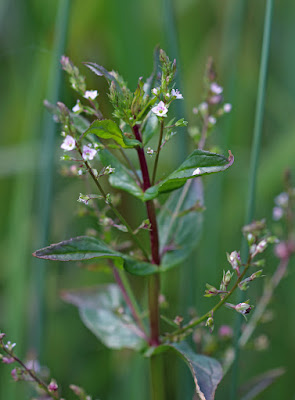 I then found the Pink Water Speedwell, which can grow quite large and bushy, but most here today were less than a foot tall. 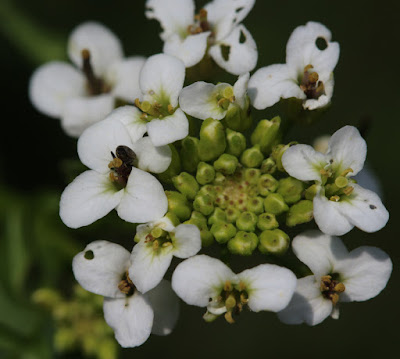 There were two of the Cardamine species in flower, this was a rather tall Wavy Bittercress. They are usually only about 6" or so tall, but several here were well over a foot tall. Their seed pods do not overtop the flowers. In Hairy Bittercress, which is far more common in North Kent, they do. 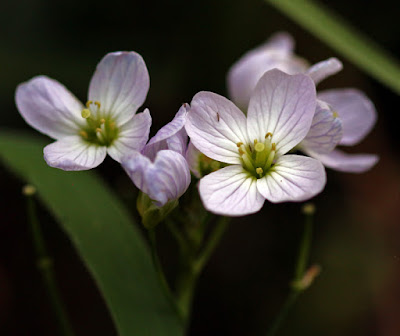 This was one of a few late Cuckooflowers, sometimes called Lady's Smock, a favourite food plant for Orange Tip butterfly caterpillars 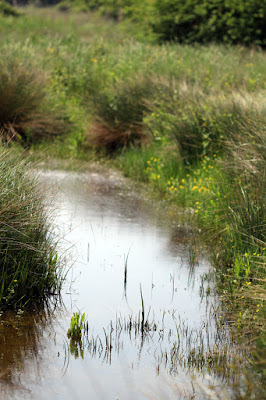 Some of the ditches were too large to jump across!
There's always plenty to see in these habitats. Some of the ditches near the edge of the reserve are brackish with salt water seepage in from the tidal River Medway nearby. I looked for the uncommon Brackish Water Crowfoots but unfortunately they were not to be found. 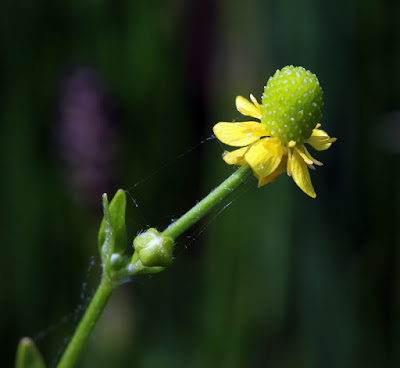 I did find plenty of these unusual Celery-leaved Buttercups though. No other buttercup has flowers like it and it loves to grow in wet or damp places like here. 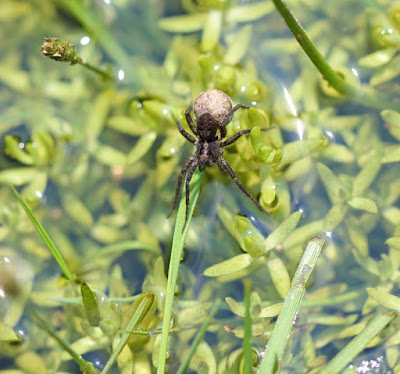 This spider was running across the water and I thought it was a rare water spider. Back home I realised it was a common Wolf Spider carrying a sac of eggs, probably to a drier spot! 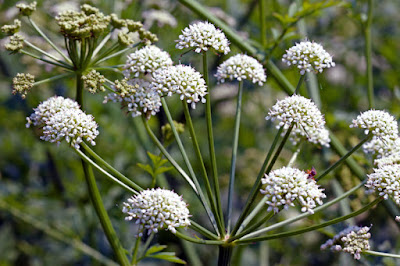 There was a lot of Hemlock Water Dropwort around the reserve edges. These are highly poisonous with few symptons before you keel over stone dead, so please leave them alone!

Large areas of them have already been cut in the main reserve by the Trust to stop them taking over. 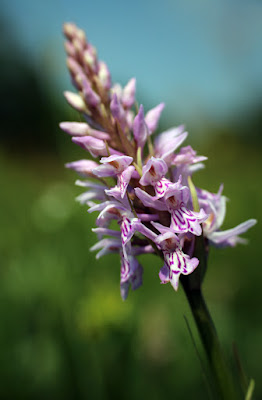 Every now and then I would see patches of Common Spotted Orchid, now coming into flower nicely. They have a distinctive 3 lobed lower petal mostly of equal size, with distinctive loops. They rarely have dots. The leaves are 99% of the time spotted but not always!

They freely hybridise with other orchids including the marsh orchids, frog orchid and Heath Spotted Orchids. It makes orchid spotting much more fun! 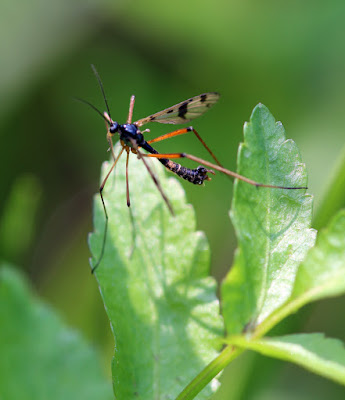 This unusual fly looks a bit like a crane-fly but it was very small and oddly coloured. I'd not seen one before but apparently they are a common species. I don't think it has a common name. 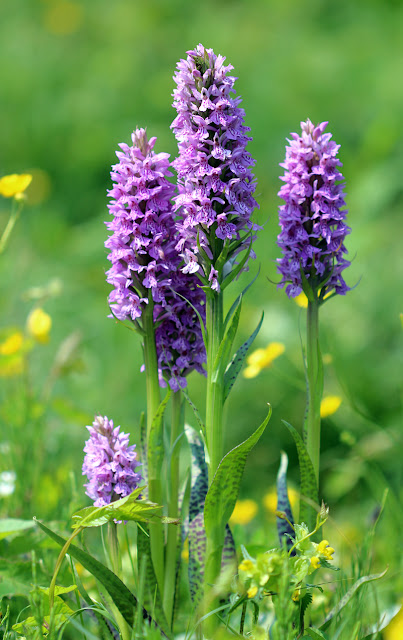 Saving the best til last was the large hybrid of the Common Spotted x Early Marsh orchid. There were several to choose from!


Getting on for 2 1/2 feet tall they towered over the parent orchids. Having said that, there was a hybrid here last year that went over 3 feet tall. Alas that one hasn't flowered this year. 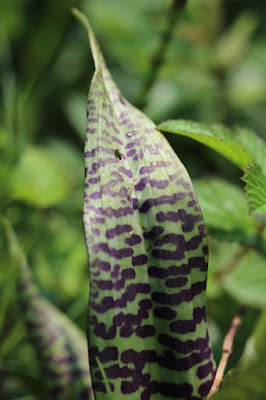 All the leaves were wide and heavily spotted or barred with dark dots and stripes. Common Spotted orchids don't have anywhere near this amount of spoting on their leaves, and the Marsh Orchids have none at all. 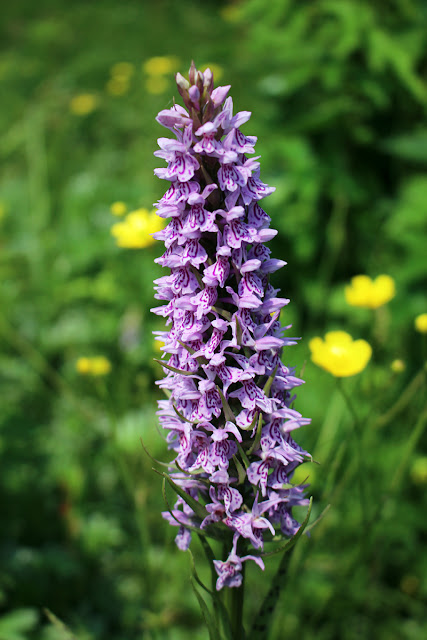 The flowers superficially look like Common Spotted but the lower petals are strongly keeled like the Marsh orchids and bent backwards, halfway between the two parents.


It's well worth visiting your local reserve at this time of the year, you could find absolutely anything, but you can guarantee there will always be something new to see