- July 26, 2016
As the title suggests I visited three distinct habitats on this day.  Part 1 of this blog details my first stop, which was to Kent's finest reserve for bog plants, Hothfield Heathlands, near Ashford. 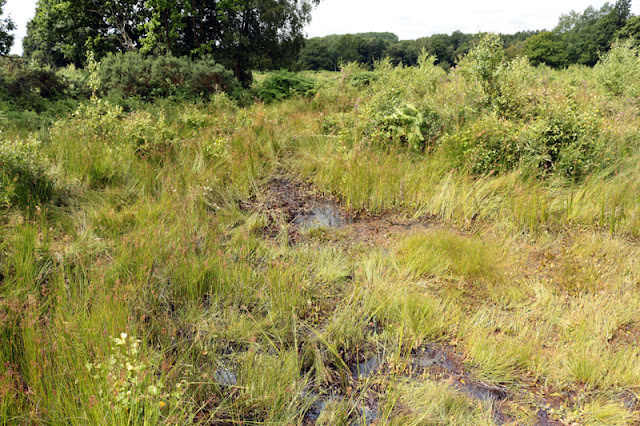 This area is managed by Kent Wildlife Trust and they are trying to reclaim the bogs from ever encroaching scrub. As such, there are often horses and cattle grazing on the reserve. I didn't see any today, but evidence of large animals trampling down the scrub was very apparent. While this may do some short term damage, it definitely opens up areas to other flowers for the near future. I don't think people realise that without management, virtually every habitat would be forest within 20 years with a virtually barren flora underneath! 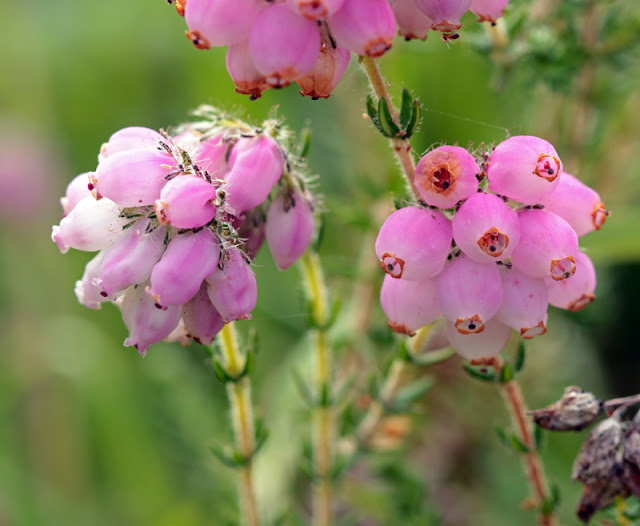 Very obvious, and scattered all over the wetter areas were these flowering Cross-leaved Heath plants. They have pink (sometimes white) bell shaped flowers that look a bit like a bunch of grapes on a stiff stem. The key to separating them from similar plants (like Bell Heather and other Heaths) is to look carefully at the leaves. Always take a good photo of the leaves, it will make identifying it very easy once the books are out at home.

Due to bog habitats being very rare in Kent, many of the plants found here are on the Kent Rare Plants Register (RPR) and this was no exception. 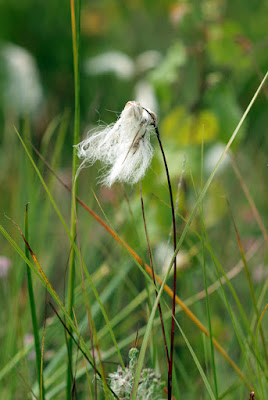 This looks like cotton wool stuck on some grass and is a very rare sight in Kent, but very common in bogs in the West of the UK.

It's actually a Sedge called Cotton Grass and the cotton wool is its seed disperal mechanism. I've always missed the flowers. 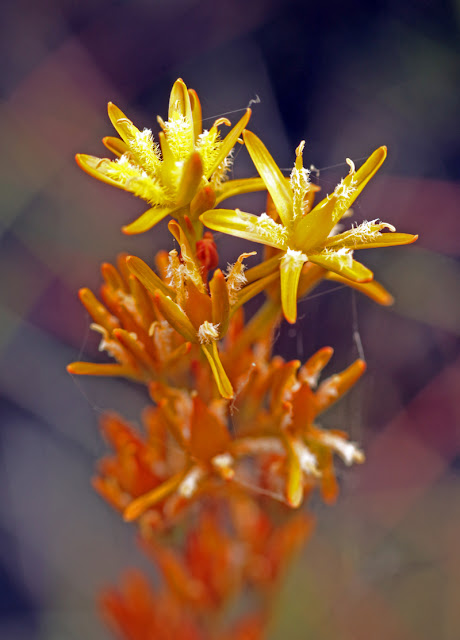 Just coming into flower were the most delightful of bog flowers, the Bog Asphodel, with its bright golden yellow flowers poking up 8" or so above the squelchy bog.

On a trip to Wales on 21st June these were in full flower, yet here they were only just starting to open. Most flowers tend to flower first in the warmer dry SE than other areas of the UK, but not bog plants!

It goes without saying - another RPR species! 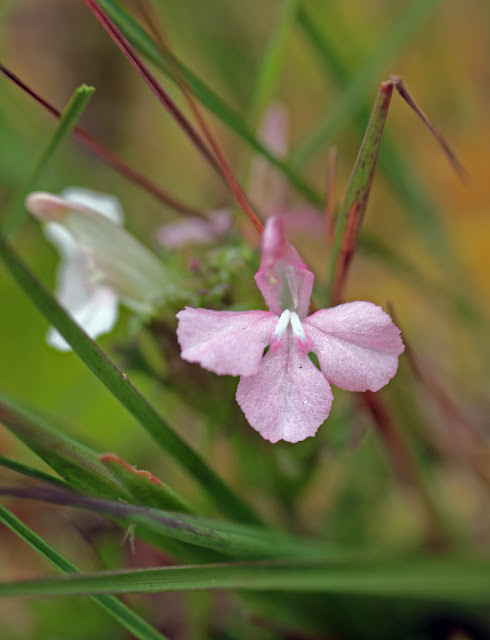 I was then delighted to find my first ever Kent record of Lousewort. Another RPR species but another that is very common in the acid bogs of the west of the UK. I saw a huge amount of them in Mid Wales last month.

Oddly, this was the only one I found. Maybe there were more but not yet in flower. The leaves are tiny and from standing up height look like moss leaves - of which there were multitudes in the bog. 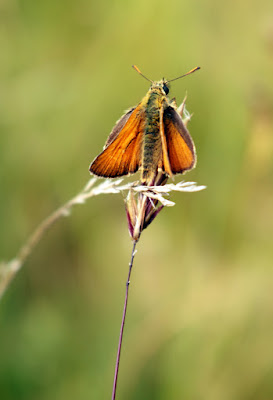 There were plenty of insect distractions, though photographing them was extremely difficult. When I stopped walking, my boots began to sink in the ooze. It was also a red hot suuny day with the temperature around 30 degrees. By now, sweat was pouring down my face and soaking my back. Lovely!


This was a Small Skipper butterfly, one of many. There were also Red Admirals, Small and Great Whites, a Peacock and hundreds of crickets and grasshoppers. Tunnel spider webs were commonplace, an entymologists dream of a place.


Just take wellies and several litres of water if its hot! 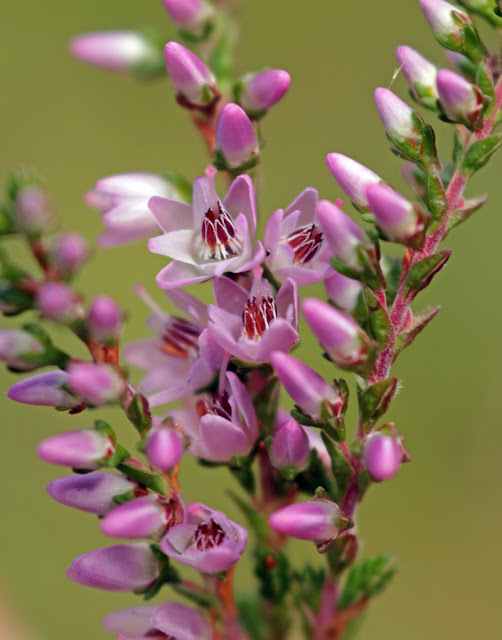 In drier parts, Heather dominated the heathland. All of it was in bud and there will be an extremely fine display of colour by now if you visit such a place.

After a while looking, I eventually found a few spikes with open flowers, which are quite intricate really.
When you see Heather en masse, you miss the detail of the individual flower altogether.


Another RPR species due to the very few suitable habitats in the county. 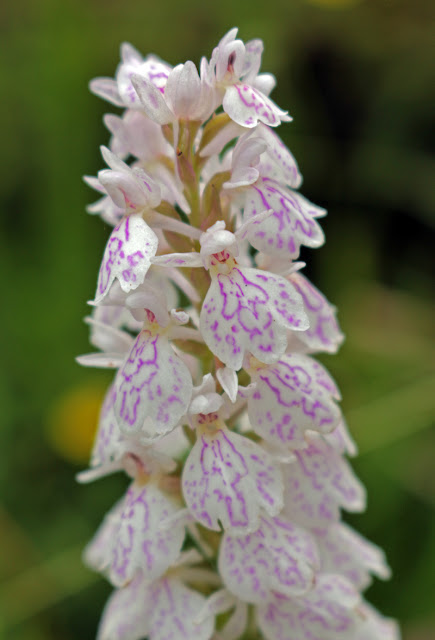 Hothfield is known for its colony of Heath Spotted Orchids. Most had gone to seed, but there were still a few to see in their fully open glory.

They don't grow in the boggy areas, but do like damp conditions around the bog edges. They are the acid soil version of the Common Spotted Orchids to which they are superficially similar. However, the 2 species do grow together in some places and then they can hybridise with each other, causing identification mayhem at times!

Rather than describe the differences between the two species, I was fortunate to find a Common Spotted Orchid a few feet away from this one. 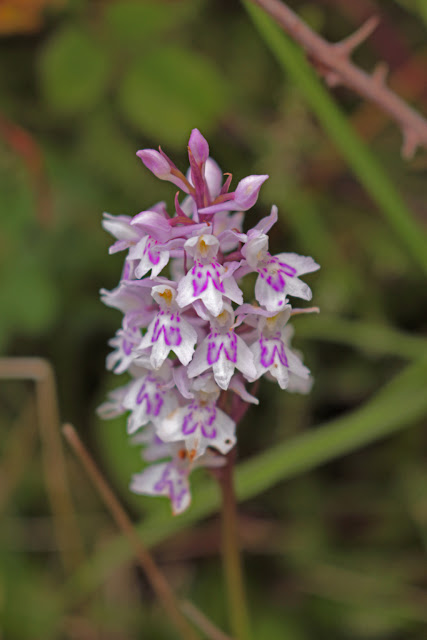 If you compare the two orchids you can easily see the key differences and saves me typing a hundred words trying to do so!

Where these two species grow together, hybrids are inevitable and sure enough I found one. 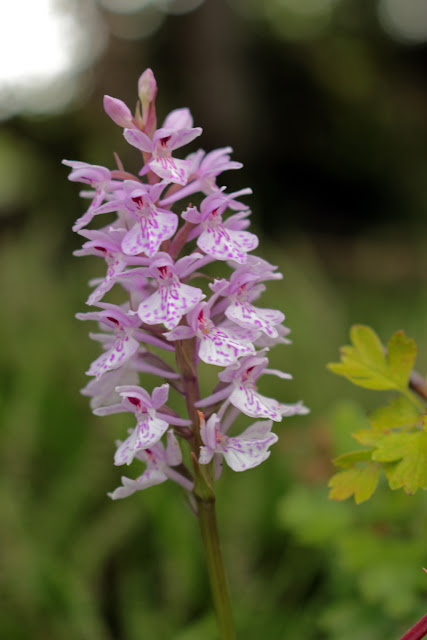 I think the specimen shows it can't be one or the other of the parent species.

The lower lip is unlike either parent, the "wings" or sepals at the side are almost horizontal as in Heath spotted and the patterns are a mix of both parents.

However, identifying hybrids can be very difficult as species like these have a large amount of natural variation in the parent species. Further, a hybrid can back cross with either parent and become even more confusing to identify. As such,, and without a DNA kit, I just have to make the best guess I can on what I can observe. 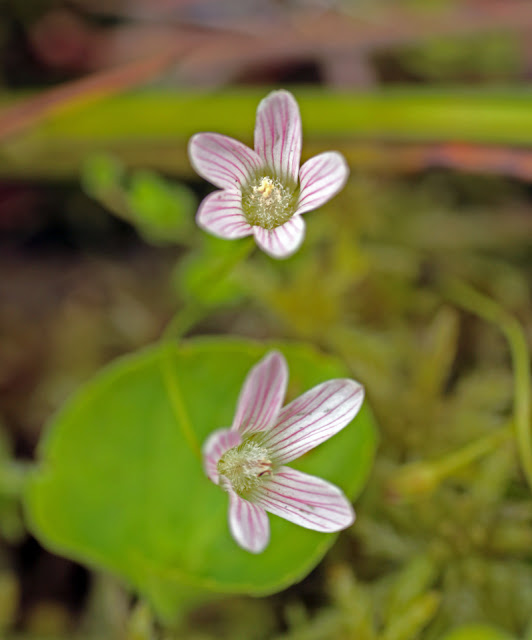 Back in the wet areas again and I spotted a few of these delightful Bog Pimpernels (RPR species).

They can't be mistaken for other Pimpernels and are very distinctive. The leaves are hairy and compact but upright and the purple or lilac veined petals are fantastical in miniature. 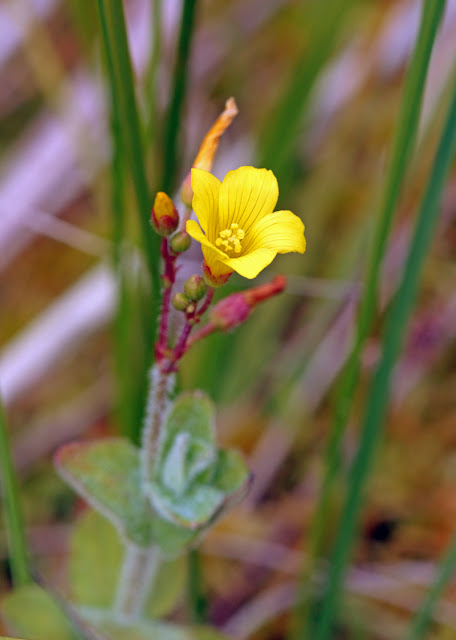 Here's the final flower I photographed in the bog habitat of Hothfield, the dainty Marsh St. John's Wort, which is the same family as the usual St John's Worts but looks totally different!

I guess at a biological level it fits into the family, but it doesn't seem very obvious to me.


This was the final RPR species of the day. I did spend an hour looking for Round-leaved Sundew, which I know are here, but I can never seem to find, though I did find one easily on a trip to Wales but they still elude me in Kent. 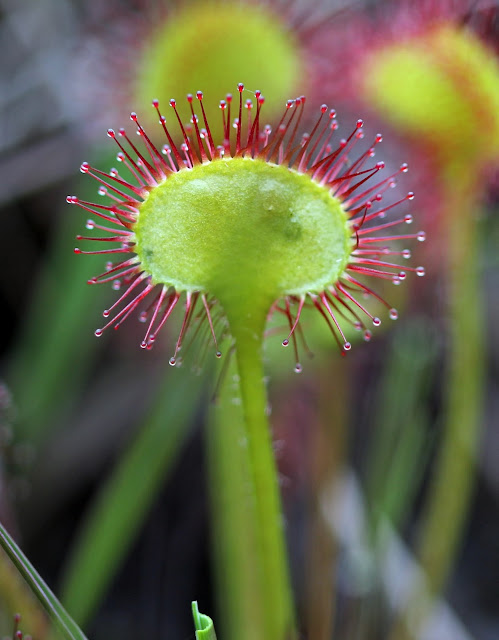 Here's the Round-leaved Sundew I found in Wales but couldn't find in Kent. Striking plants that eat insects that get stuck on the sticky dew like pads. A Midge eater - I like those! I was eaten alive at one point at Hothfield.

Keep a look out for Part 2 - the Shingle of Dungeness, coming soon!