- July 12, 2016
Nightjars and similar rare birds are what Tudely Woods is managed for by the RSPB. There's also a rare butterfly they have tried (so far unsuccessfully) to reintroduce, but the modern RSPB had a bigger agenda than birds. They have transformed into a force for nature and manage their reserves for all wildlife now (not just birds). As such, I have become a member and I visited this reserve to see what wildflowers I could find and record. 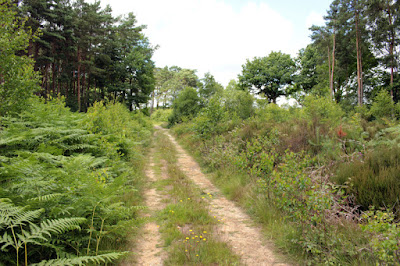 I had decided to record all species that I could identify South of the car park, so this covered two OS monad squares. Overall, I managed about 70 species per square, which is quite good going really.

There were many grasses, rushes and sedges which unfortunateley I can't identify yet. I just don't have the time to learn them at the moment. 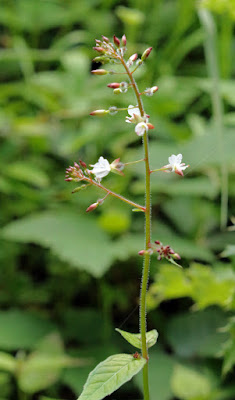 A common woodland species which loves growing in the shade is Enchanter's Nightshade, a delicate tiny flowered spike rising from big dark green leaves, suited to the shade under woodland trees.

However, if you recorded here a month ago you wouldn't see any evidence of them at all, the leaves pop up first, then the flower spike follows quickly. That's why it's important to survey an area at different times of the year. I am fortunate in that I have access to a database that tells me when a particular monad has been recorded, so I can plan a visit to get different species there by visiting at a different time.

I've also been told this plant is a nightmare in the garden if it gets established. However, it only thrives in shade, so in full sunlight it won't compete with other plants and won't be a problem in your garden. 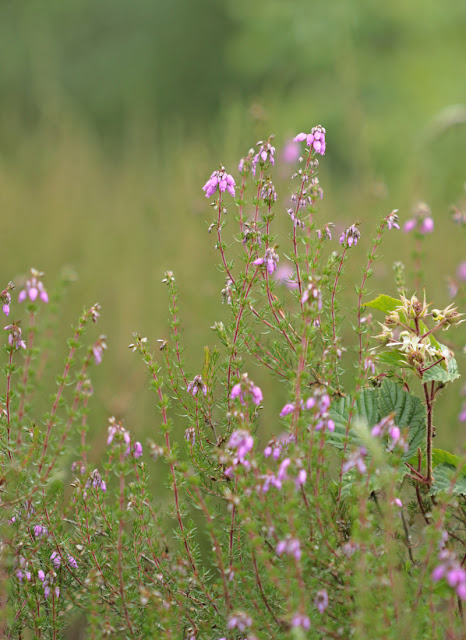 There were many of these plants just coming into flower. At first you could think they were Heather, but on a closer look, you can see the flowers are bell shaped and hanging down, which Heather doesn't do,

They are in fact, the aptly named Bell Heather, a rare plant in Kent, mainly because heathland isn't a common habitat in much of the county. 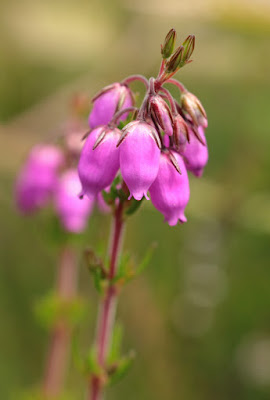 Here's a close up of the flowers which are like the Heaths, but the leaf arrangement is quite different.

They were common in both monads here though 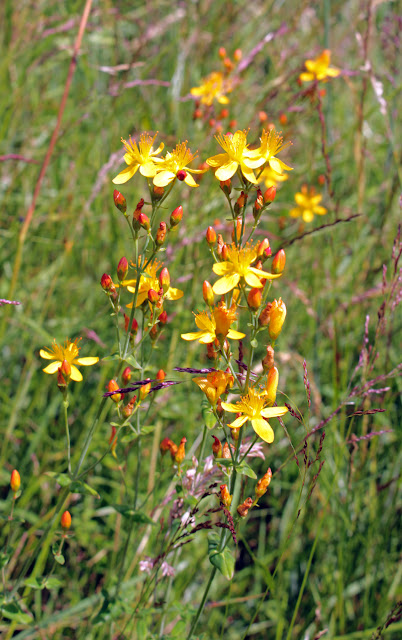 This was another common flower here, but uncommon in the rest of the county. It is the aptly named -
Slender St. John's Wort. Compared to the very common Perforate version, this is quite delicate, but the giveaway to its identity is the red tipped buds and well branched slender stems. 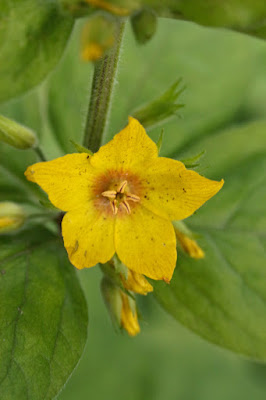 Dotted Loosestrife is an uncommon naturalised alien usually found near houses. This plant was right by the RSPB car park, so I suspect, in the past, there was flytipping of garden soil dumped here, containing seeds to this attractive plant. Most people think it's Yellow Loosestrife, but the dark centre of the flower gives away its identity. 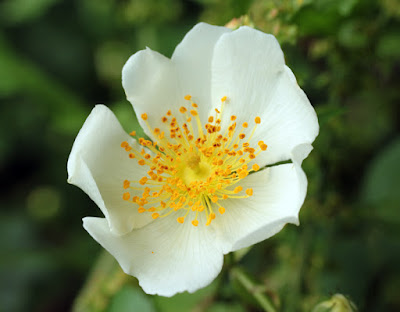 Directly above the Yellow Loosestrife was a scrambling Field Rose. The scrambling unsupported nature of this plant easily identifies it from the common Dog Rose. 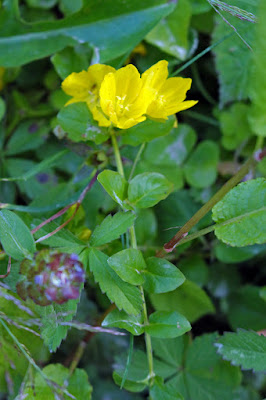 Nearby was a close relative of the Dotted Loosestrife, the Creeping Jenny. This has opposite rounded leaves and a bright yellow flower. It looks similar to Yellow Pimpernel, but crucially the latter have pointed leaves. 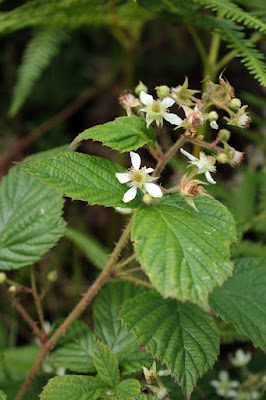 It's easy to think that anything with toothed green leaves and thorns that scrambles through the undergrowth is a Bramble!

The woods were full of these non brambles though. Brambles usually have 5 leaflets per stem, but these have 3 pale green leaves with quite pathetic white flowers and a mix of thorns and bristles on the stem. It's a Raspberry! 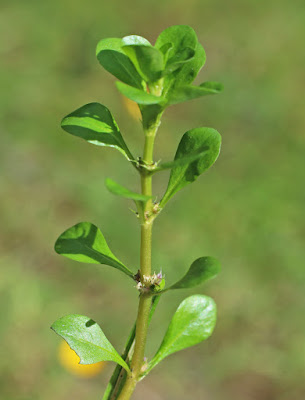 There were plenty of wetter areas and dried out streams in this part of the woods. Given the slightly acid nature of the soil as well, it gave rise to some interesting species which I never see on chalk. Here's one of them,  the Water Purslane.

In the nodes of the leaves are some very tiny flowers, with tiny half size pink petals. 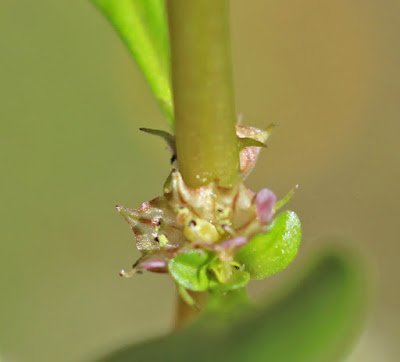 
This is the best I could do.  Apparently it is a common plant in this type of habitat but it's the first I have seen of the species. 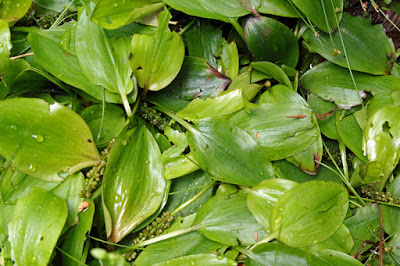 Another plant of boggy areas is Bog Pondweed, a plant that is ok with drying out in the Summer months but equally, is ok with being submerged in the Winter.

Although I had already walked several miles, I made the effort to go North from the car park to Brakeybank Meadow, as thousands of Common Spotted Orchids had been reported here recently. 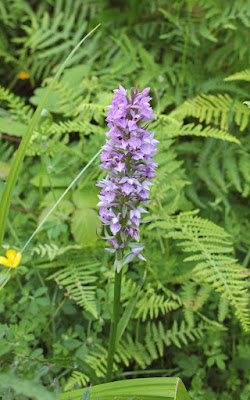 As I walked down the path from the car park, I noticed a tall, solitary orchid.
It was quite obviously a Southern Marsh Orchid but I am convinced it is a hybrid of sorts with Common Spotted Orchid, possibly a back cross with dominant Marsh genes and Common Spotted markings
I have recorded it as a Southern Marsh Orchid as without a portable DNA kit, you have to make the best guess on the observations available at the time. 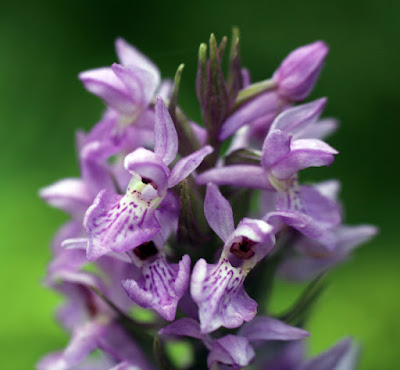 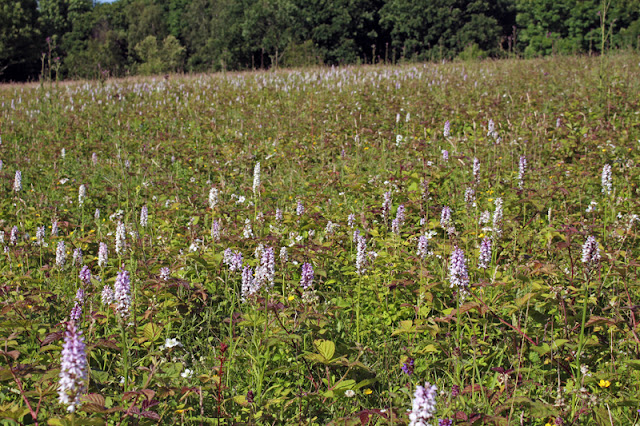 Brakeybank Meadow certainly did have hundreds of Common Spotted orchids. I examined lots of them but could not find any hint of a hybrid in any of them. This meadow has also been extended and cut hay from this part of the meadow spread on its bare soil, thus making a future extended meadow a very real possibility. It was a delight to see. 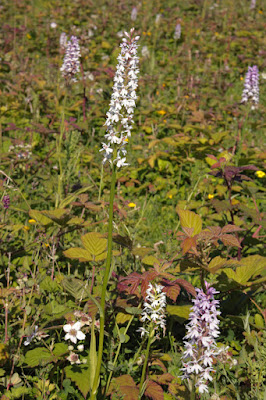 And so ended an amazing walk through the  RSPB Tudely reserve. I recorded numerous species for the BSBI atlas for 2010-2020 which is an important tool to compare to previous decades. From the information people like me have submitted, trends can be identified for species that are struggling or doing well.

I obviously saw much more than I photographed, but when out and about, I tend not to photogrpah the very common or those I already have good photos of.

Why not visit your local nature reserve, whether RSPB, Wildlife Trust, Butterfly Conservation or any other reserve or country park. You might find something new.