Day 2 started off pouring with rain, no surprise so far this year then, even in the usually drier Kent it's been extremely wet this year. 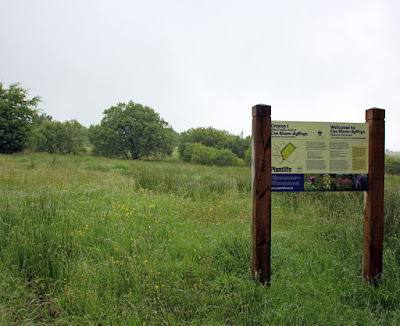 Having caught up on time, it gave me the opportunity to visit Cae Blaen-dyffryn, a stunning orchid filled meadow managed by Plantlife Cymru.

On arrival, it was raining heavy drizzle, which made photography difficult, but I'd give it my best.

Togged up in full waterproof and waterproof walking boots I entered the meadow. 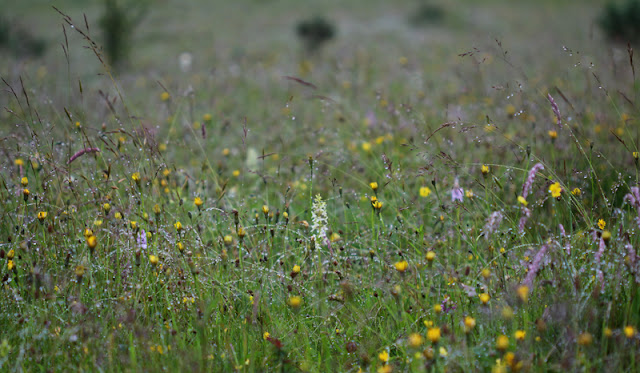 I knew there would be Lesser and Greater Butterfly Orchids here, but these have gone over in Kent and I wasn't sure if there'd be any to see here. However, I was pleasantly surprised to find literally hundreds of them in full flower, albeit soaked, in this meadow. 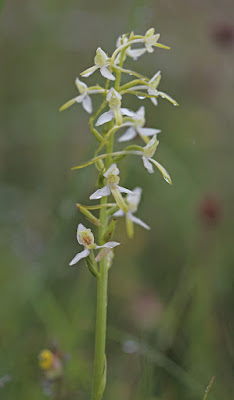 Lesser Butterfly Orchids are quite scarce in Kent, but here, almost every other one was a Lesser form. They look quite similar to each other, but the Lesser is usually smaller, with less crowded flowers and importantly, the pollinia are parallel to each other, but curved in the Greater Butterfly. 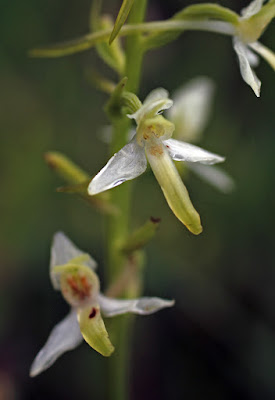 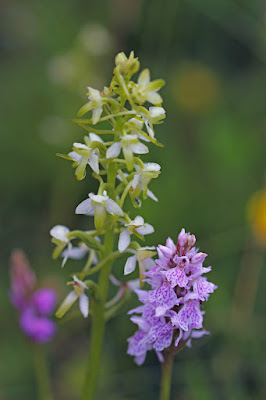 In contrast, here is a Greater Butterfly Orchid (next to a Heath Spotted Orchid). The flowers are bigger , more crowded and the pollinia are not parallel, see next photo. 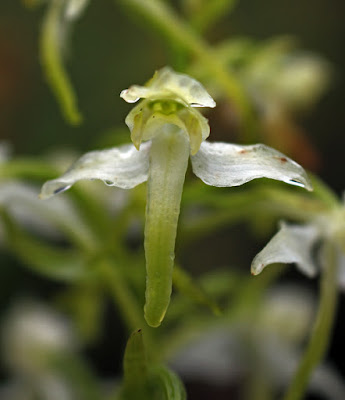 Note the curved pollinia of the Greater Butterfly.

I would have got better photos to illustrate the differences but I haven't got a waterproof dslr camera, so had to be quick in the rain!

Just to confuse you, they can hybridise with each other and I'm sure there would have been some here, given the large number of both species present and flowering at the same time. Hybrids will have some flowers with straight and others with curved pollinia. 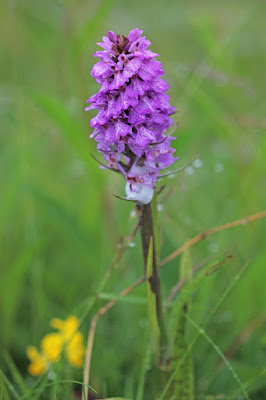 Heath Spotted Orchids were also flowering in large numbers, an attractive orchid, they are the acid soil relation of the Common Spotted Orchids most common in Kent on alkaline soils.


These freely hybridise with other orchids (but not Butterfly Orchids) so it's always worth looking carefully at the plants to see if you can find one. 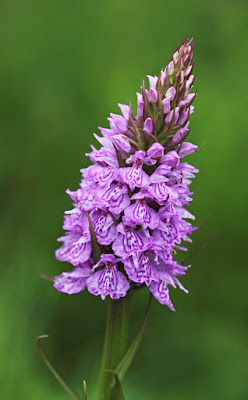 Most here were pink to purple colours though they often come with white petals and pink dots. Markings can be dots, dashes, loops or a combination of all of them, like this one.

Orchids being as they are though, this isn't always the case, but identifying tricky looking orchids is part of the fun of finding them. 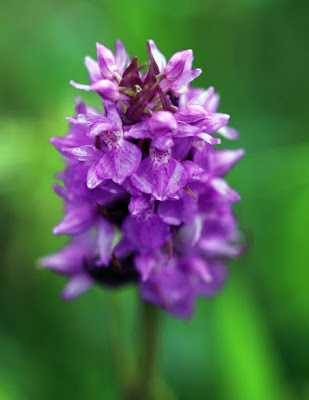 As if to prove a point about possible hybrids, I then found a small group of Southern Marsh Orchids. These are mostly found on alkaline wet areas but some grow in dry meadows and up in Kent on dry chalk slopes as well.

The lower petal has a strong ridge running down it like the keel of a ship. Leaves are almost always unspotted.


I'll now keep an eye out for hybrids! 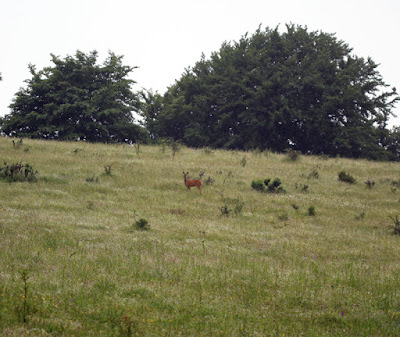 As I walked up the slope I startled a deer that ran off and leaped over the perimeter fence with ease. 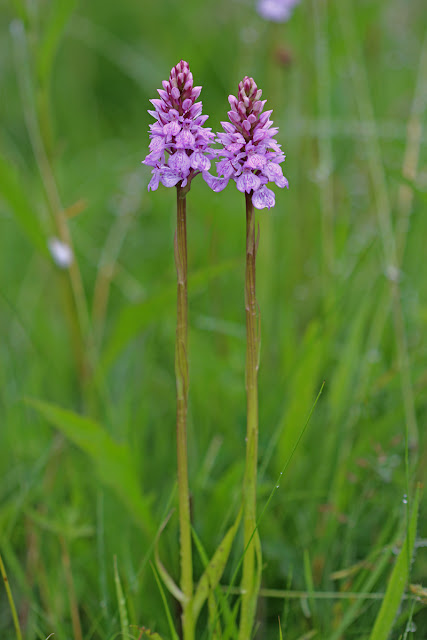 It didn't take long to find a hybrid or two. Hybrids are often very vigourous and much taller than either parent plant.

These two were no exception being a cross between Heath Spotted and Southern Marsh Orchids.

They have the small pointed centre "tooth" of a Heath spotted and the keel of a Southern Marsh with lightly spotted leaves. 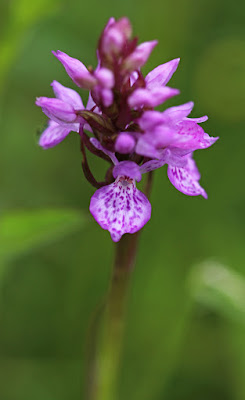 I then found another odd looking orchid that I think is the same hybrid, though this one was quite small like the Heath Spotteds. 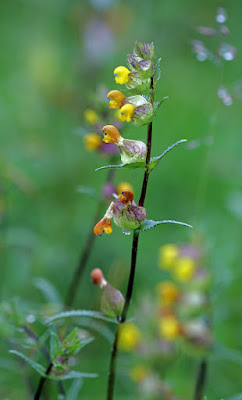 In meadows, grasses can dominate and stifle out orchids and other wildflowers. As such, it's usually vital to have parasitical plants growing there that will sap strength and vigour from the grasses, so giving other wildflowers a fighting chance of survival.


This is one such plant, the Yellow Rattle, an odd looking flower with  purple parts poking out of the bright yellow petals. It was abundant in the meadow, so no surprise that orchids were as well. 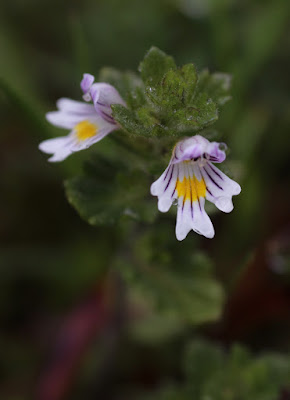 Another parasitical plant (I think the proper term is hemaparisitical) on grasses were Eyebrights, again plentiful in the meadow, especially on the upper slopes. There are several species of these, but they are difficult to separate and my eyes aren't up to seeing tiny bracts beneath the leaves now. 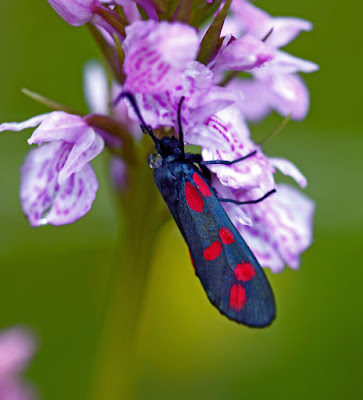 This Six Spot Burnet Moth didn't like the rain at all. I could approach it at will without it taking flight. You can see a raindrop by its head.

Here's yet another hemiparasitical plant, the Lousewort, with its odd shaped purple flowers like jewels in the damp grass. They're not that common in Kent as they like damp acid soils which are uncommon in my county. You can see another tiny Eyebright in the foreground. 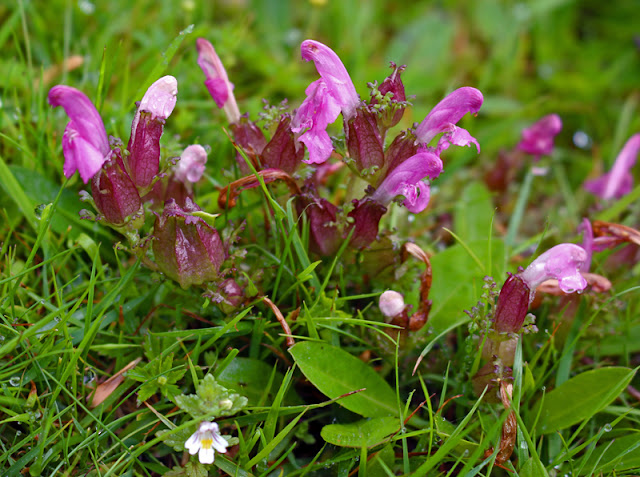 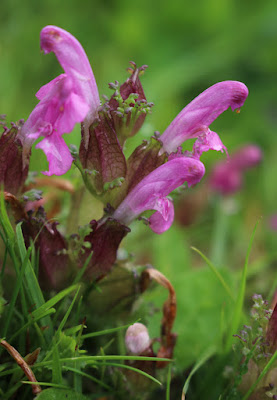 Here's a side view with its weird petals and odd looking frilly leaves.

As usual, I spent too long here and ended up with soaking wet boots which were supposed to be waterproof. I changed socks and put on my walking shoes to continue my journey, now heading to South Wales and the fantastic reserve at Kenfig near Bridgend.


That concludes part 2 of my botanical journey to Wales. Keep checking in for the final episode in Part 3 for some stunning plants from Kenfig and a few on the way there as well.