This is a large piece of woodland South of Ashford in Kent, but we tend to walk the Southern end as it has wide open rides full of wildflowers, butterflies and other insects of interest. It's a lovely walk with a free car park, only ruined by some inconsiderate dog owners who leave copious amounts of dog mess on the paths, some of which I trod in this day. Apart from that, it's well managed for bio diversity. 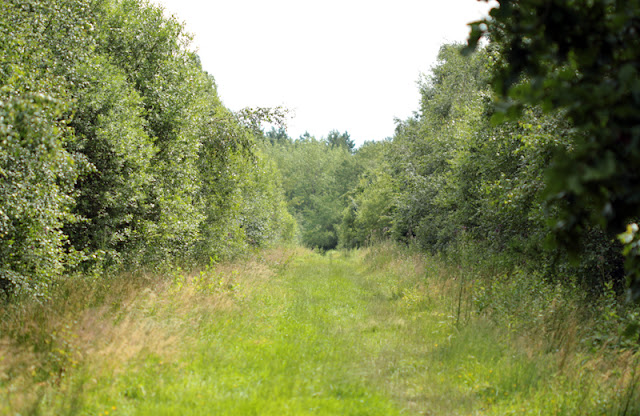 The first plant I noticed was one that 99.9% of people will never notice! Lots of Marsh Cudweed, an insignificant little green plant with dusty brown flowers, it grows on edges of well worn paths and other dusty places. It seems to thrive in places where it gets trodden on or driven over by tractors, perhaps because such activity eliminates the competition? 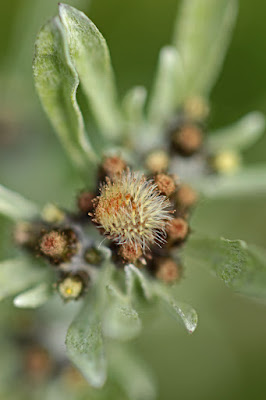 The whole plant is usually only about 3" tall, but there's usually quite a few found after you spot one. 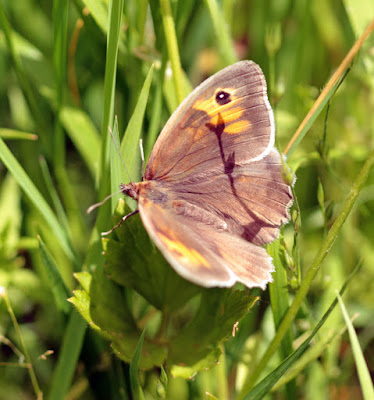 Meadow Browns were abundant, as they are in many places at the moment, though all too soon they will be gone until next year. There were several of these large yellow flowered umbellifers around, with their big leaves they are unmistakable as Wild Parsnip. They were the forerunners of the cultivated form that you may roast on a Sunday! 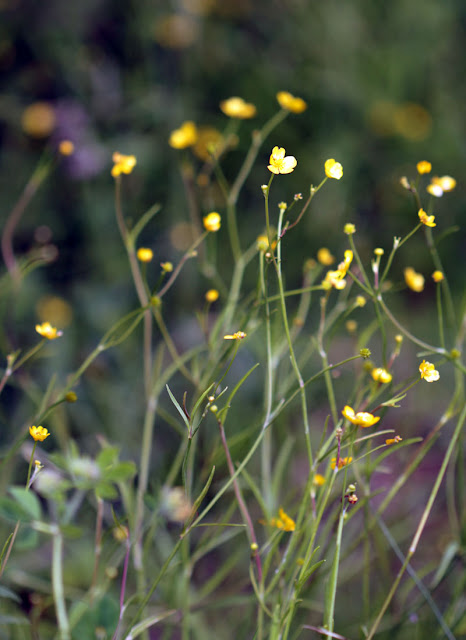 Along both edges of the path were ditches which remain damp, except in the driest of conditions. Here grew plentiful amounts of Lesser Spearwort. They look rather like tall, spindly Buttercups, which is no surprise as they are closely related. However, they have narrow, strap like leaves and often grow in the water as well.

In shadier areas grew Curled Dock. These are quite unimpressive when in flower as they have no petals, however, as they go to seed, they look quite colourful and are also much easier to identify from the seeds than from the flowers.

Also present in good numbers were Wood Sage which has aromatic leaves, smelling much like a Smudge Stick when crushed. Don't be fooled by its name though, you can find these in a large variety of habitats from woods to heaths, and from meadows to the shingle of Dungeness. They are very common, but I like their spikes of rather weird flowers. 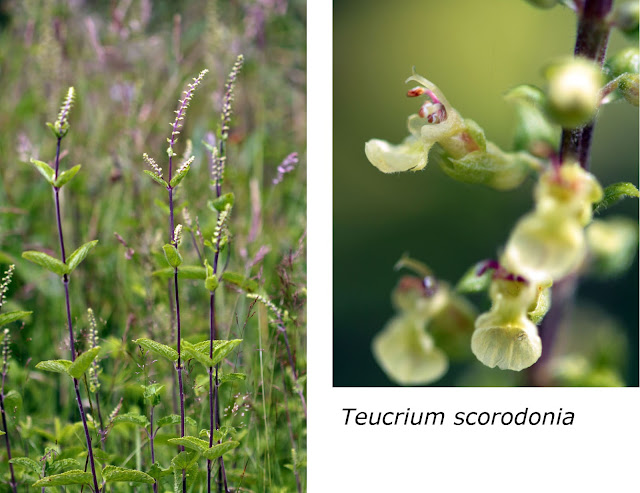 We then had an insect distraction of this beautiful female Common Darter Dragonfly. A couple of years ago there were over a 100 seen on one of our visits, mostly the red coloured males dancing around potential mates; we timed it right for them that trip. We only saw a few this time around. 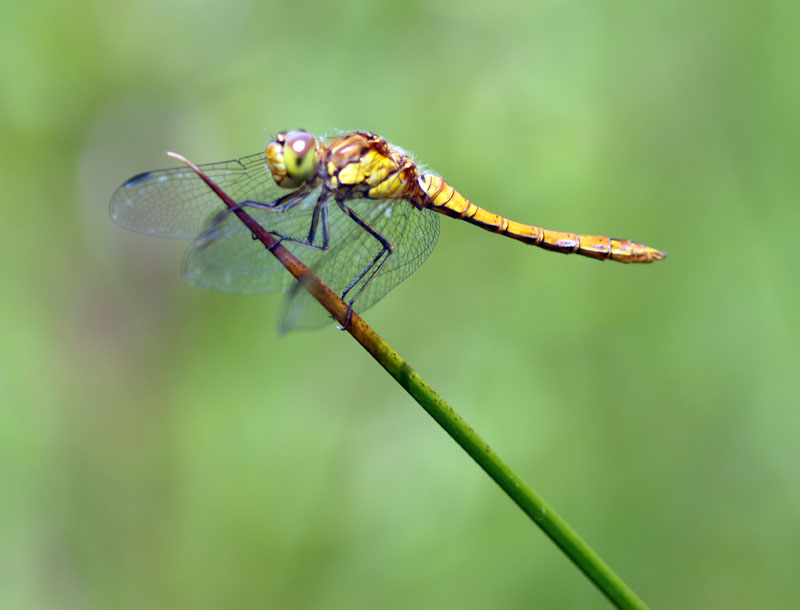 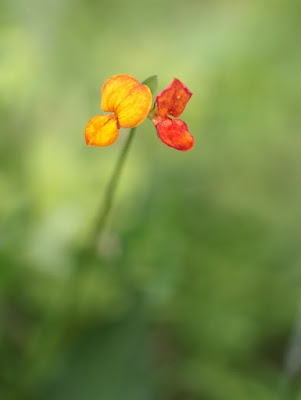 Common Birdfoot Trefoil is so common, that after it first appears you tend to ignore it. Huge mats can cover large areas and so they can be easily overlooked. However, this species has a tendency to go red as the flower ages and also show red tips when in bud, making a delightful scene. Also remember to check the leaves, it may be a different species altogether. 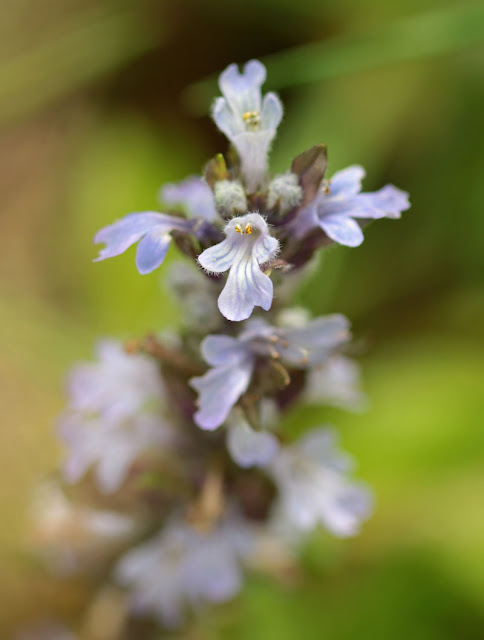 I was very surprised to find a group of Bugles in flower. They are a Springtime plant that flower with the Early Purple Orchids.

While they were full of flowers, I did notice that the stems appeared to have been bitten off some time ago, perhaps by deer or rabbits. I think that is why they have flowered late. I've seen the same phenomenon in other species when the stem has been cut. Hogweed is a prime example after being cut on verges in Summer, they flower again in December!

Another insect distraction were these tiny Potato Capsid Bugs on Red Bartsia, itself flowering in high numbers. 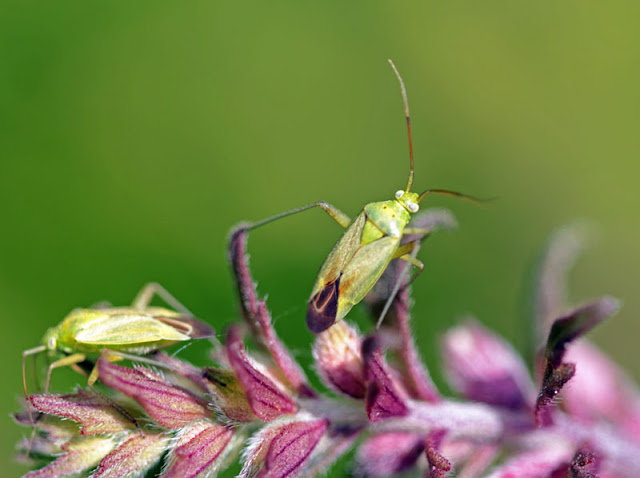 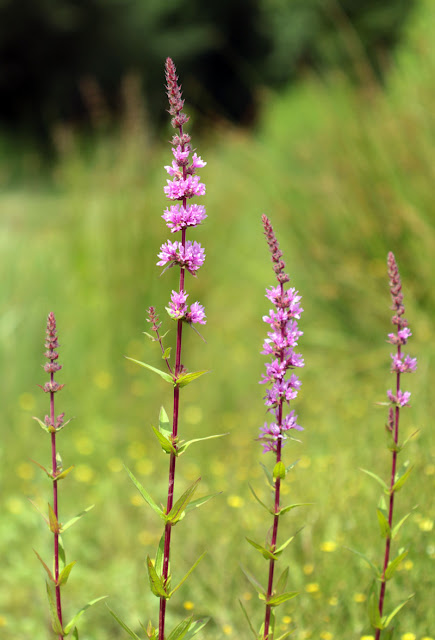 From tiny bugs and flowers to very tall ones. One area of the open woodland has a massive stand of these Purple Loosestrifes, an attractive plant that should be planted in gardens as I think they put on a very fine display of showy flowers and attractive leaf/stem colours.


All these flowers attracted a lot of butterflies. This is a pair of Ringlets doing what they need to do so that we see them again next season. 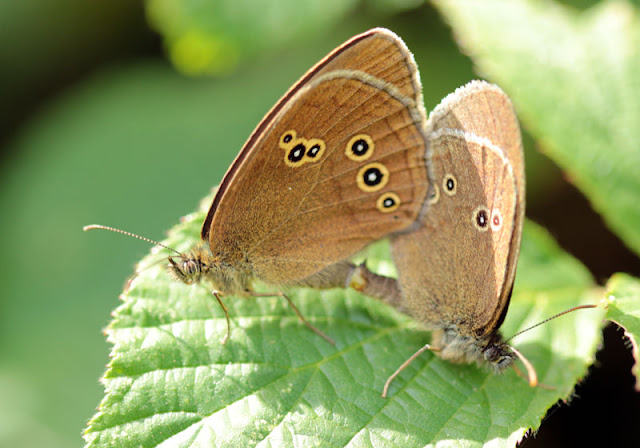 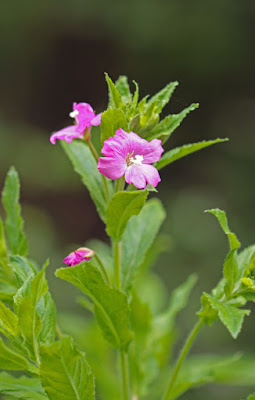 Another tall plant and one that is very common is the Great Willowherb. Their purple flowers with bright white centres stand out well in the shady margins of the forest. They are also found on waste ground, towns and city pavements, sea walls, arable field edges and so on. A very successful species as are most of the Epilobium family. 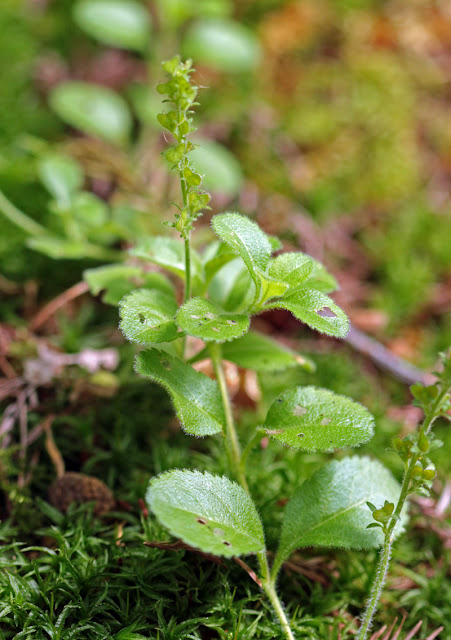 This plant is actually in seed, but I took a record shot of it to remind me to record a sighting of it. It's a Heath Speedwell and is on the Kent Rare Plant Register due to habitat loss.

The spike of lilac flowers arising from a spiralling rosette of toothed oval leaves is distinctive. 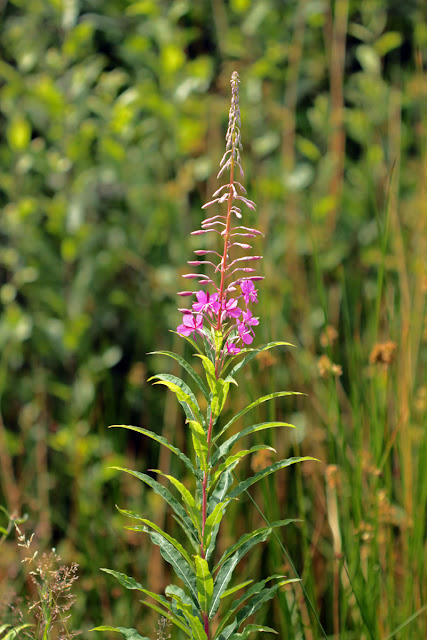 Sometimes mistaken for Great Willowherb, this is the Rosebay Willowherb. Where you find one you will find a lot! Another successful coloniser of waste ground in urban and wild areas alike, but they do put on a colourful display. When they go to seed, the pods split open and look fantastic as the fluffy seeds spill out. 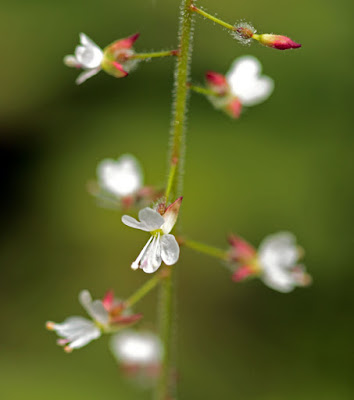 As we mad our way back to the car park on a different path I noticed Enchanter's Nightshade in the gloomy shadows of the trees. This plant thrives in deep shade, it has very big leaves for the size of the plant and forms dense mats along the ground in places. I'm told it's a nightmare "weed" in some gardens.

However, I just love the common name it has and also the tiny red tipped white flowers glow in the gloom, like tiny dancing fairies in the slightest breeze. 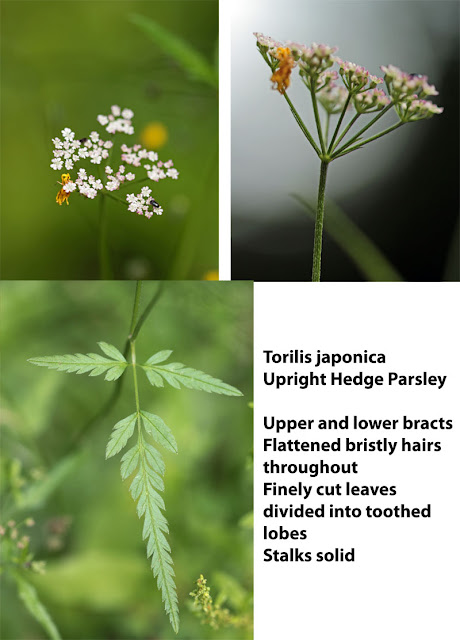 At first glance this looked like a late flowering Cow Parsley, but it's quite different. The leaves are thinner, more compact and pointed than in Cow Parsley, the flower heads smaller and the big bracts under the flowers confirms its identity.

The key to identifying white umbellifers is made easier by referring to when species are meant to flower and the habitat you find them in. The flowering times of many of these species do not overlap and many more grow in water or damp conditions which others do not tolerate.
Those hints will narrow your find down to just a few, instead of 20-30 species to look at!


My partner then pointed out to me the find of the day by far, an uncommon White Admiral Butterfly. It had come to the ground to lick salts from the damp soil but it spends most of its time high up in the trees. Up until this day the only photos I had of this species were a few blurred, long distance shots of them in the canopy.

It's also worth checking for the markings on them as the rarer female Purple Emperor looks remarkably similar. 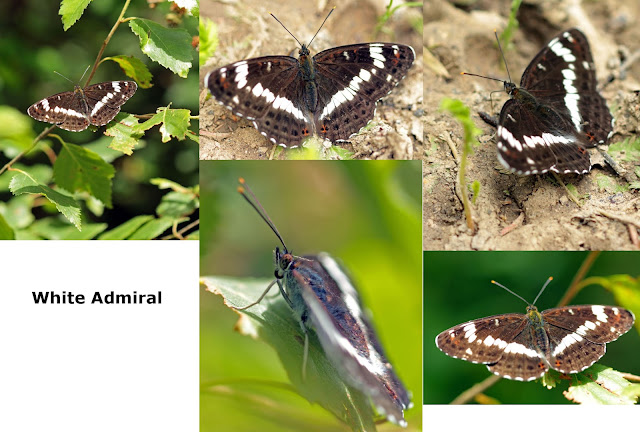 That was about it for Orlestone Forest. I do like going there and it's a must visit place for Dragonflies and Butterflies for sure. There's plenty of botanical interest as well from Spring to Autumn. There were numerous Common Spotted Orchids in one area but they were by now well past their best so I didn't photograph them. Other surprises will be found at different times of the year as well.

We then drove South to a few other places which don't warrant a blog to themselves, so I'll just pop them into this blog as it was the same day.

The following photos were taken near Iden Lock, just into East Sussex. 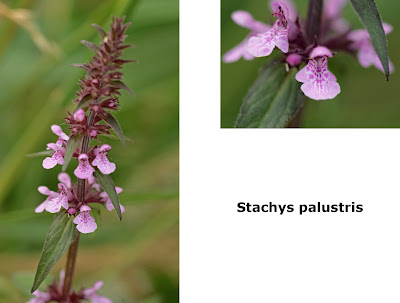 The beautiful Marsh Woundwort, found in or next to waterways and very damp areas as its name suggests. These were lining the edge of part of the royal Military Canal. 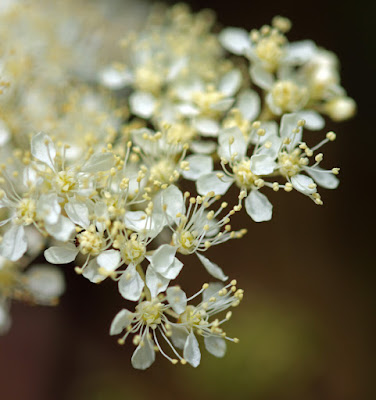 Close to the Marsh Woundwort was a stand of the wonderfully smelling Meadowsweet, except it's really found mostly by water and ditches. No doubt in times past there were plenty of damp meadows around when it was named, however, such habitats are now very rare in Kent.

It's the wet habitat version of Dropwort that is found on the dry chalk. The plants look quite different, but the flower structures are very similar. Meadowsweet has lovely smelling leaves as well if you crush one for a sniff!


The last photo is the Field Bindweed, literally a bind in farmer's fields, but elsewhere, the flowers look stunning. As the sun goes down the flowers close up into tight tubes. The flowers are very similar to Sea Bindweed, but the latter has small fleshy leaves of a different shape to Field Bindweed. So if you're away from the coast, it's almost certainly this species! 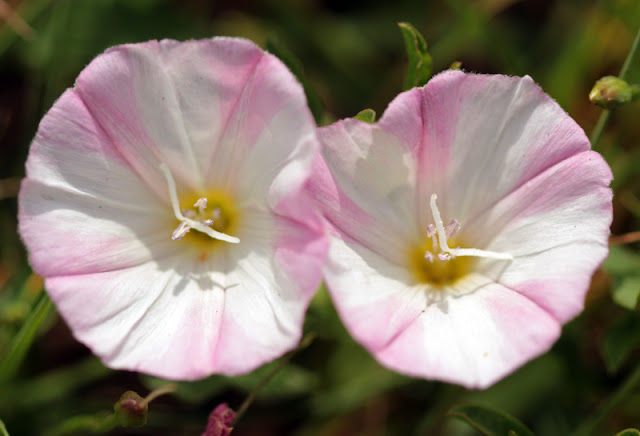 That was it for the day, I hope you enjoyed the blog, I write it for you, in the hope that it may inspire you to go out and look at the wonders of nature for yourself. Take the kids or grand children with you and watch the wonder on the faces as they see their first butterfly, dragonfly or beautiful wildflower, it's well worth it.