- July 11, 2016
The word "wasteground" tends to denote wasted space that could be put to better use. It is often applied to brownfield sites and as such no-one really cares if they're then developed or built on. After all, it was just "wasteground".

Unfortunately, nature thinks otherwise, and wasteground sites are often abundant with a diversity of insects and plants that have been eradicated elsewhere, either by building houses, roads or industrial estates, or by being sprayed to the point of extinction in arable fields by modern farming practices.

I have some "wasteground" near me in Longfield, which, no doubt in time, will become a housing estate. Ever increasing population means an ever diminishing place for nature.

Anyway, enough of the doom and gloom! I spent about an hour here and this is some of what I found. The area is basically rectangular on a South facing slope on chalk, bounded by a railway line on one side, an arable field on another and 2 roads for the remaining sides. 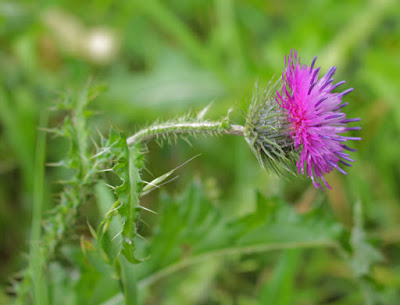 Thistles are common, but look closer and there are several species your thistle could be. What struck me as different on this one was a line or welt of spines running up the entire stem of this plant almost to the flower.

It was of course a Welted Thistle 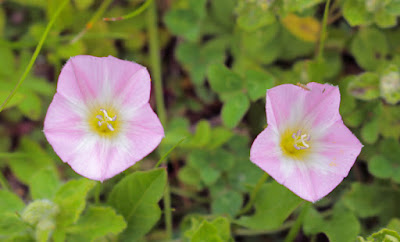 Field Bindweed was abundant in places, binding around foliage to support itself. The flowers are quite attractive, with pink and white lines making them quite different to other inland bindweeds. 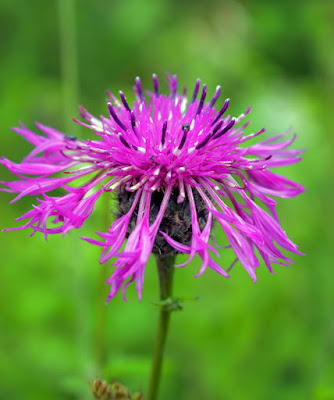 Greater Knapweed is a striking plant with the flowers fringed with branched rays. Various forms have been cultivated and adorn many gardens.
Bees love them as well! 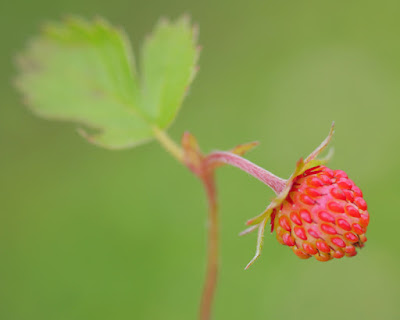 Near the shadier edges of the meadow were patches of Wild Strawberry. There were a few flowers left but most were in fruit. 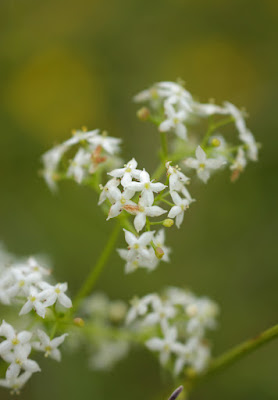 Hedge Bedstraw was sprawling though the grasses all over the meadow. Out in the open, on chalk, these were quite small, but in open hedges they can grow over a metre tall and be very bushy. 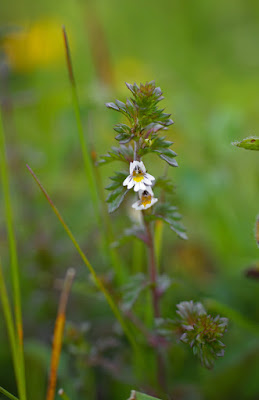 One of the key things to increase plant diversity in a meadow is to have plants that are parasitical on grasses. This stops the field from becoming just another field full of tall grasses, as the parasitical plants sap some of their strength giving other species a fighting chance to grow.

Here's one of them, most likely a Common Eyebright, though to tell the species apart is quite difficult, with a good hand lens needed. 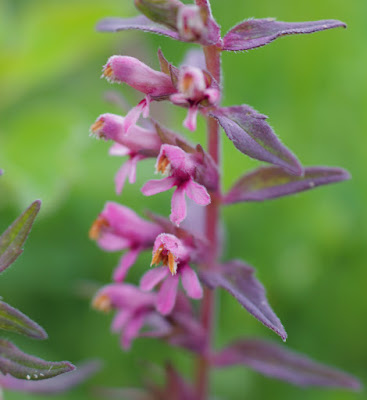 Here's another, the Red Bartsia. The flowers look like a Lousewort but these are numerous and on multi branched stems. 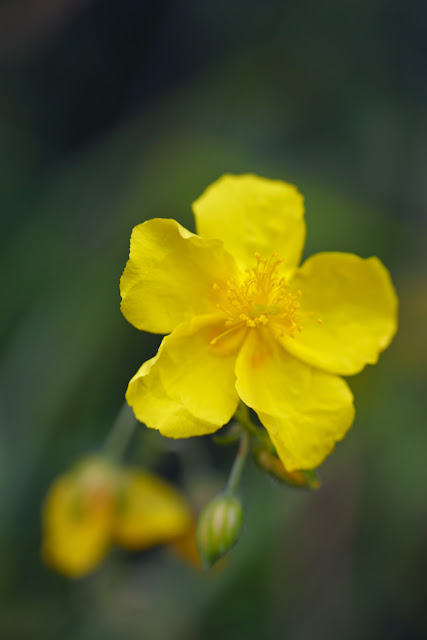 Most of the plants I was finding were very typical of chalk grassland, like this Common Rockrose. It is mat forming and there were hundreds of these small bright yellow flowers in several areas. 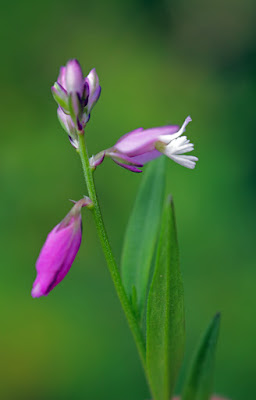 Common Milkwort is another typical chalk loving plant of short turf. These appear to have a flower within a flower and can be deep to light blue, pink to purple or even white. 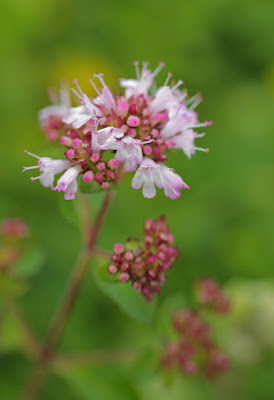 When I walked here last year, there were thousands of these Wild Marjoram in flower and it was a lovely sight, with bees and insects buzzing from flower to flower.

I was a bit too early for that this year though. Only one of two had their flowers open, the vast majority still in tight bud. 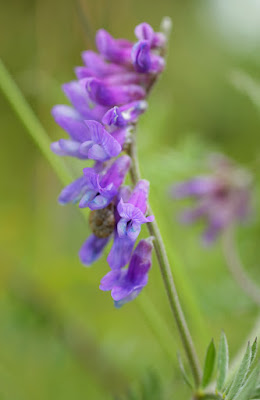 Here and there were patches of Tufted Vetch, a climber in the Pea Family, so they like areas with longer grasses or other plants to grab onto as they grow.

They have distinctive spikes of flowers in a tuft at the tip of the stem. 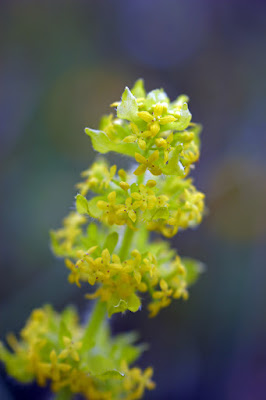 The delicate, beautiful Crosswort put in an appearance as well in good numbers, though many were now going to seed.
Whorls of bright yellow flowers on a pale green plant, give it an almost ethereal or ghostly appearance in low light. 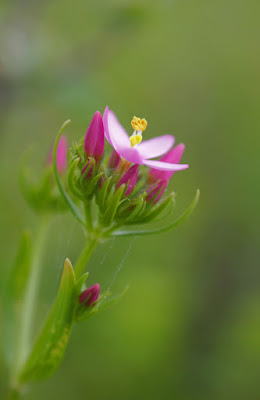 This is a side on view of Common Centaury, an attractive pink petalled flower with golden anthers in the centre. The petals are quite reflective, making a head on photo difficult in bright conditions.
This can be a problem as the flowers only open in bright sun! 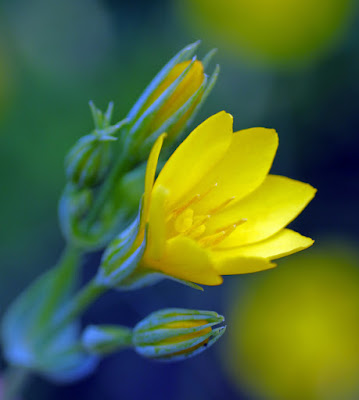 Here is another plant that only opens in bright sun, the Yellow-wort. It is easy to recognise as the bright yellow flower spike pops up through the middle of the lower leaves. It's a common plant of thin chalk soils. 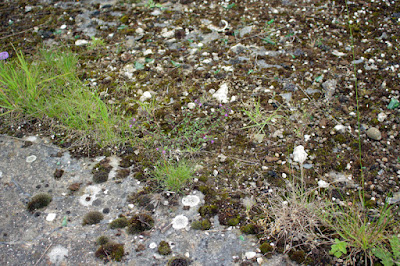 I then came across a small area of old concrete close to the road. Doesn't look much does it! 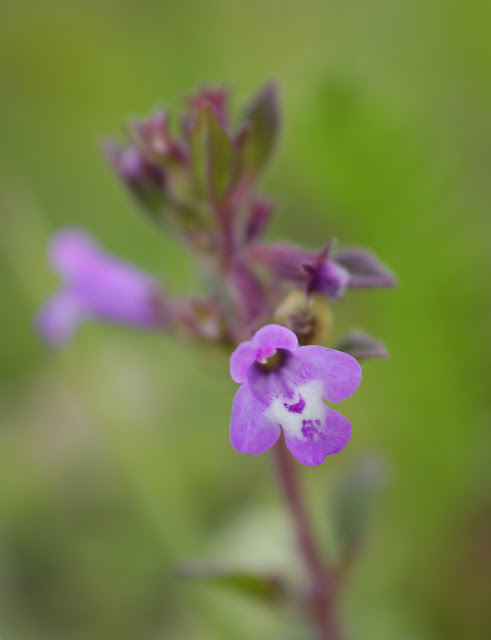 But growing here was the find of the day, the rare Basil Thyme, a fast declining plant in Kent.

These need disturbed ground for the seeds to germinate, or a lack of competition from bigger plants. They are only a few inches tall so get shaded out very easily.


In other areas, it is often rabbits or grazing animals that create the right conditions, but here it was just some old concrete. 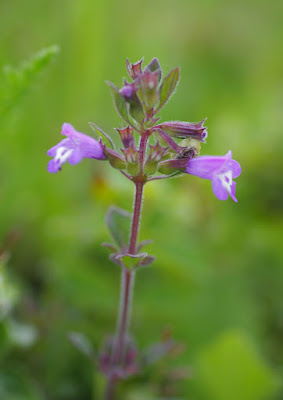 Here's the whole mini plant in all its glory. 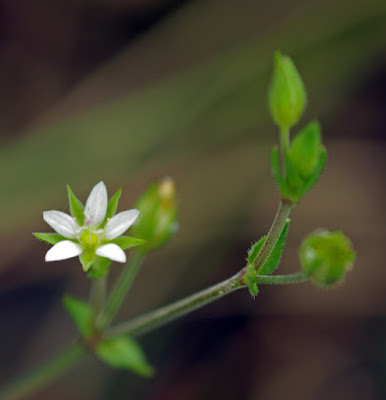 Another plant that favours these conditions was this Thyme-leaved Sandwort. The flowers really are small, often half a centimetre or so across. The sepals are always longer than the petals with stalkless strap like leaves in opposite pairs below. 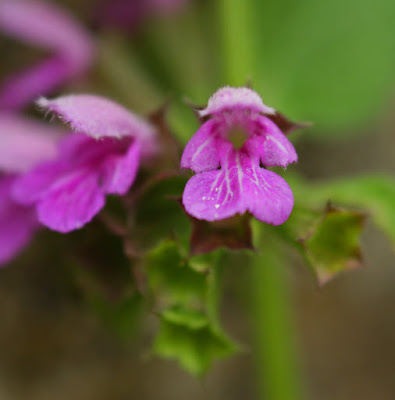 The smelly but pretty, Black Horehound was abundant on the meadow edges, with whorls of bright pink flowers spaced up the stems. 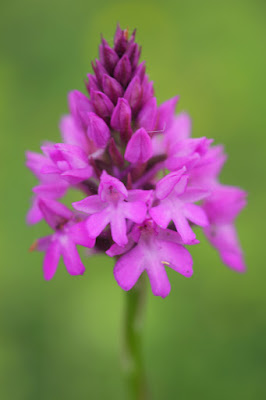 Of course, chalk meadow isn't complete without an orchid. This is the Pyramidal Orchid, quite common in North Kent and elsewhere. It is one of the first orchids to colonise new areas, such as new road verges or railway lines.  Bee Orchids may follow soon after if conditions are suitable. 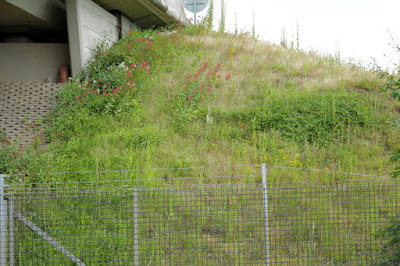 As I walked back home from the meadow I passed the railway embankment. Growing here were several White Mulleins, quite rare in the county but opportunistic when soil is disturbed such as here when they rebuilt the bridge for HS1 some years ago.

And so ended a pleasant hour or so on my local patch of "wasteground". If you have such a place in your area, make the most of it before it is developed, because one thing you can be sure of in these uncertain times - if there's money to be made they'll build on it!

A point to consider is that several of these plants are on the Kent Rare Plant Register, which means they are either rare, or declining so fast they soon will be. We then record what we find so we can determine how fast they are declining.
Species on the RPR that I found here were: Wild Strawberry, Common Rockrose, Crosswort, Basil Thyme, White Mullein - not bad for a bit of "wasteground" is it?