A large shingle habitat in Kent can only be at Dungeness, a huge peninsular of shingle deposited by the sea over at least 2 thousand years. Viewing maps from Roman times onwards, you can see how it has grown into the huge area it is today as shingle is swept from the Western side of Dungeness and deposited along the Eastern beaches.
The whole area is a National Nature Reserve, within which there is the RSPB reserve. This is a fantastic place for botany, but wasn't where I went this day. Opposite the RSPB main entrance is another less well trodden part of the reserve called Boulder Wall and was a former ARC shingle quarry/gravel pit. 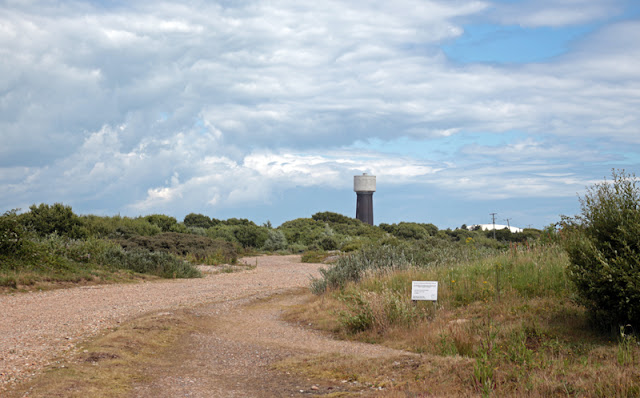 The habitats range from the obvious dry, desert like conditions of shingle ridges, to sandy areas, left over from the gravel pit days and to lakes and ponds formed from deeper gravel extraction into the water table. This provides for a variety of species, many very rare in Kent. 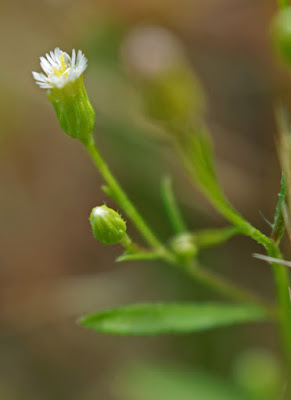 It was a very hot and breezy day to start with, so as a result not all the photos are super sharp.

The first species I noticed in numbers wasn't rare at all, but it can be tricky to identify. It's Canadian Fleabane, often found as an urban weed, it can colonise very dry areas, from the shingle of Dungeness to a crack in a town pavement or an old brownfield concrete area. There are two other Fleabanes that look very similar, Guernsey and Bilbao Fleabane. I won't go into the differences here but you need an eye glass to see the tiny flowers up close!
These plants were only inches high, but they can grow well over a metre tall. 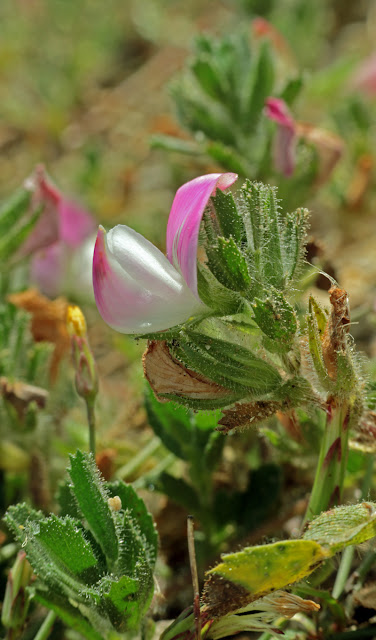 Another small plant that can colonise shingle is the Common Restharrow, also common in field edges and chalk grasslands. If you crush the leaves they smell of gone off lemons and are quite sticky from the glandular hairs all over it.

If handling these on the North Kent coast be careful, as there is a Spiny Restharrow species found there with vicious sharp spines that are as bad as Blackthorns!


Nothing rare or unusual yet, but I'm sure I'll find something soon. 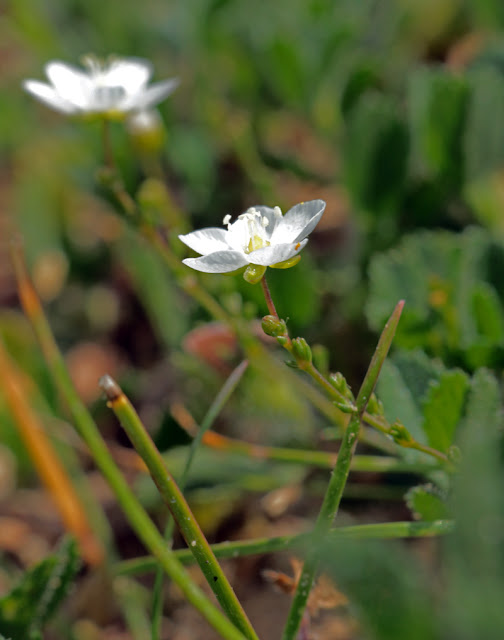 Sure enough I did. At first I ignored the multitude of these tiny white flowers thinking they were Sandworts, but eventually I had a closer look and found them to be Knotted Pearlwort, a Kent RPR species. Common in this area but missing in most of Kent.


Unfortunately, the sun was shining brightly and bleached out the photos I took, but you can see the "knots" of leaves up the stem that give it its common name. 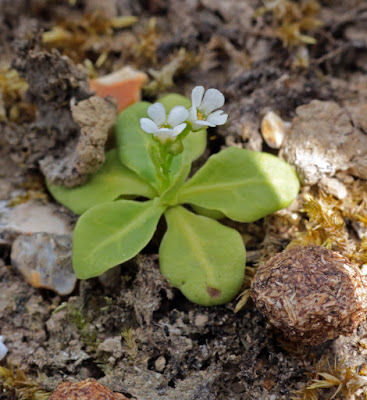 I then came across several Brookweed flowers, most of them very small. In the past I have only found these near water and they grow up to a foot tall with branched flowering stems. Later in this walk I did find many larger versions by water, but these were on the dry shingle, so seem stunted by comparison. 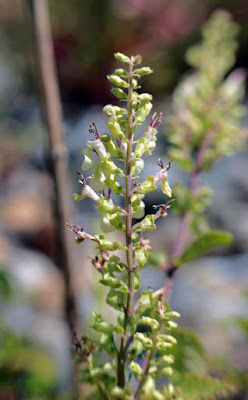 This is Wood Sage and it dominated large areas of the open shingle ridges, literally millions of them all in flower. Quite a sight and the bees certainly liked them.

At Dungeness point last year I had found Common Dodder parasitising Wood Sage. Dodder is a rare plant so I kept a look out from now on for it. 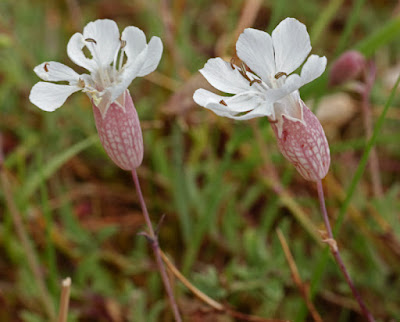 I then came across large numbers of two species of the Campion family. This one is Sea Campion. Superficially it looks rather like Bladder Campion, the main differences being that Sea Campion has:
leaves all in a basal rosette
a single flower to each stem
the "bladder" isn't inflated
the petals are more open and spread out. 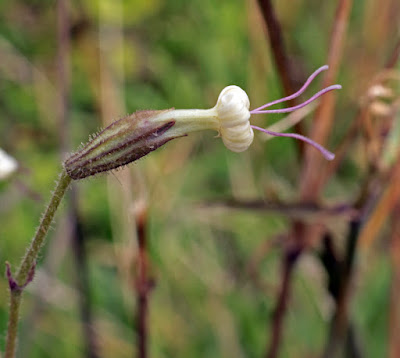 This is the second Campion species, called the Nottingham Catchfly. It's another RPR species but is very common on the Dungeness NNR but hardly anywhere else in the county.

It's a very sticky plant, I believe, pollinated by moths. At night the petals unfurl and open out and a scent is emitted attracting night-time pollinators. 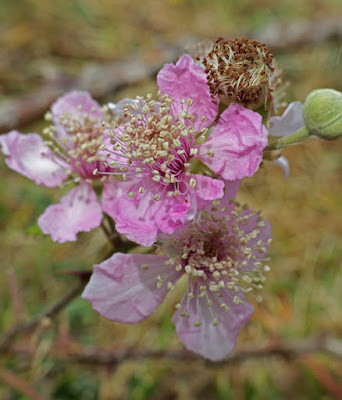 Brambles are found just about everywhere and it's not often I photograph such a common flower. However, this one was such a bright pink, I felt obliged to honour it with a photograph.
Normally, the flowers are a dull creamy white and tatty looking. I have read that there are 334 apomictic micro species of Bramble (clones), virtually impossible for the likes of someone like me to identify.
This is why they are aggregated into one species called Brambles! 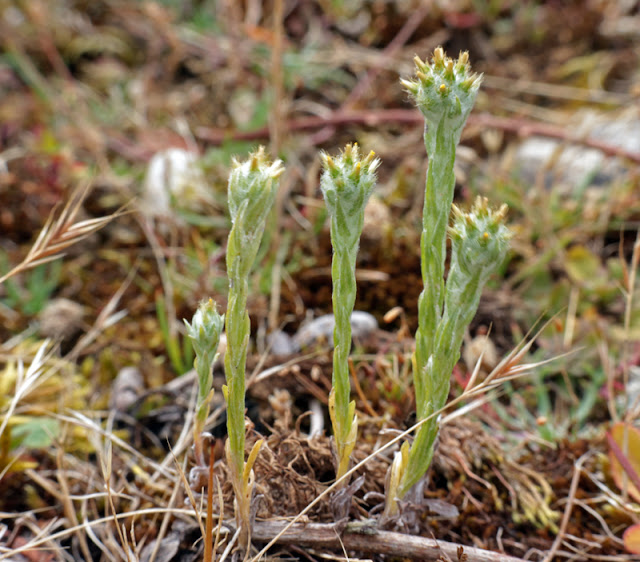 I very nearly missed these plants altogether. They were only a few inches tall and without petals and being pale green, blended into the background. It's the Common Cudweed, another rare plant for Kent, though not restricted to Dungeness. I have found some in Darenth Country Park in North Kent in the dust of the car park! 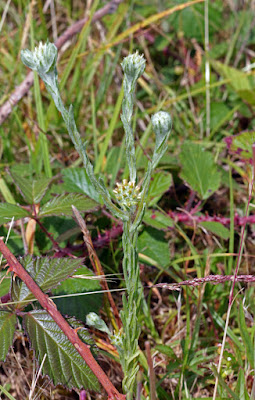 I thought they might be the even rarer Small Cudweed, but nearby were taller, more mature plants to confirm the identification.


Eventually I found over 50 of the plants. 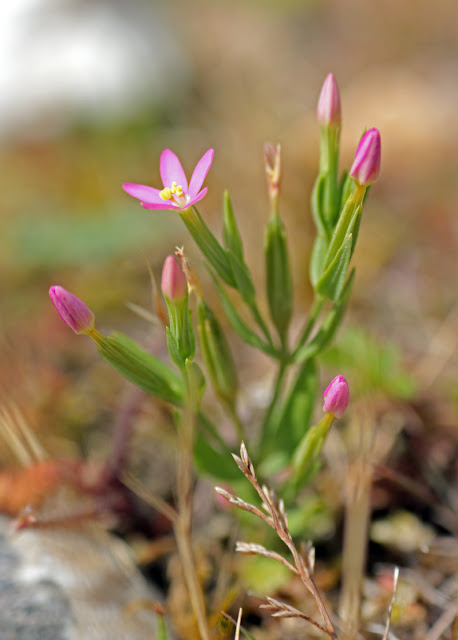 While bent down looking at the Cudweeds, I noticed an even smaller flowering plant.

Always a delight to find, it was Lesser Centaury. They have much darker pink flowers than Common Centaury, no basal rosette and an elongated calyx below the petals.
They're also quite small! 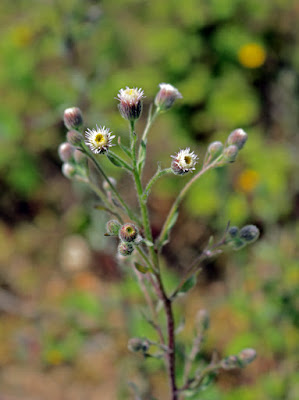 Blue Fleabane were also flowering in the dry areas, their flowers much more attractive than its Canadian cousin. 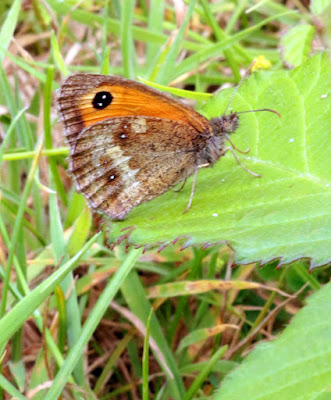 Butterflies were numerous. Photographing them was another matter, especially as they seemed very tuned into the crunch of boots on shingle and took flight at every step!

I saw Red Admirals, Skippers, Whites, two Small Coppers and this fresh Gatekeeper. These can be told apart from Meadow Browns in that the "eye" has two dots in it and it's a bit smaller than the Meadow Browns.

I then came to some wetter areas and found completely different botanical species. 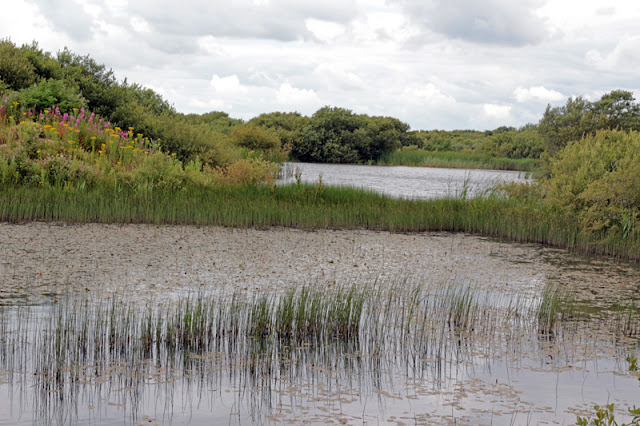 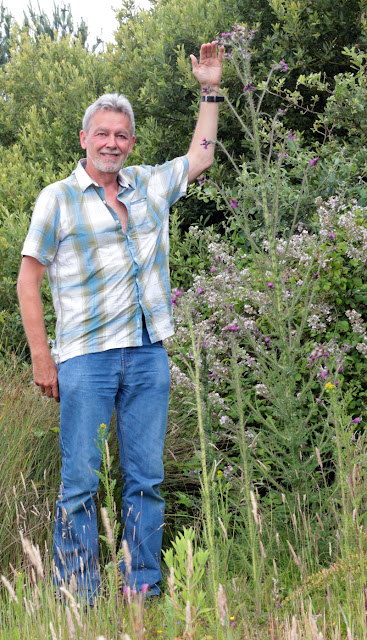 I've yet to take a good photo of a complete Marsh Thistle. This is because they can grow so tall that to get them all in you have to be a long way back! Also, without some scale you can't really see how big they are, so I did a timed photo to include myself as scale.

I'm 6'2" and this Marsh Thistle must be about 7' tall, a very impressive size with deep purple flowers.

What you can't see it that by now my shirt was soaked in perspiration! Quite unusual at Dungeness to be so hot. 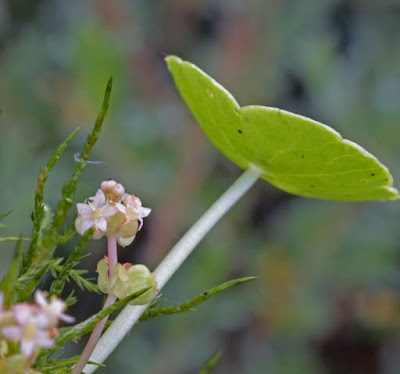 This is Marsh Pennywort, and viewed from the top is forms a carpet of roundish notched leaves. You wouldn't think it flowered at all. However, part the mass of leaves and underneath at this time of the year are numerous tiny off white/pink flowers. Being hidden and in the shade all the time, I would guess that midges and small bugs pollinate them. Bees and butterflies wouldn't be able to get at them at all. 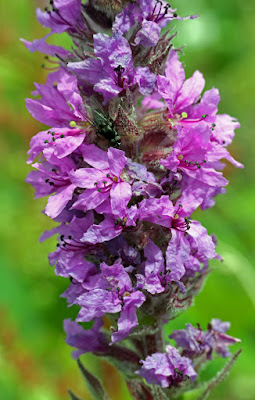 Purple Loosestrife like it damp as well and there were big stands of these showy but untidy purple flowers around the lakes. Most were around 2 feet tall, but they can grow much bigger. 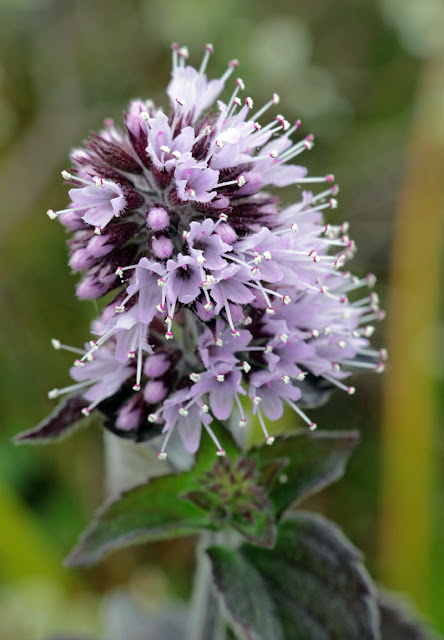 Around and in the lake margins were thousands of Water Mint. Of all of them I could only find this single plant with open flowers, but within a week or so, hundreds of them will be in full flower.

You can't mistake it being Mint, just crush and smell a leaf to remind you of a Sunday Roast dinner!

Water Mint has flowers in whorls up the stem but also a head of flowers at the top of the plant. 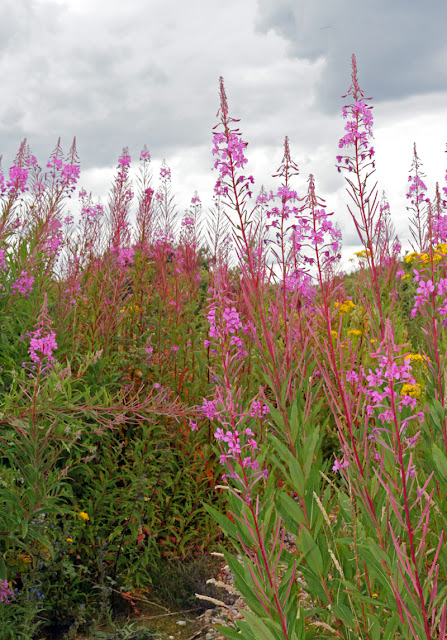 Plants don't have to be rare or uncommon to be beautiful.

This is a stand of Rosebay Willowherb in bright pink hues with the yellow of Common Ragwort behind. 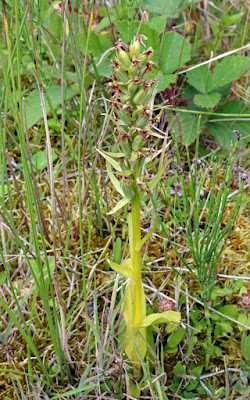 I was then very surprised to find 3 Southern Marsh Orchids, unfortunately all in seed, but I'd not seen Marsh Orchids at Dungeness before.

I later checked the BSBI records and found they had previously been recorded from this area, so not unknown, but still uncommon. 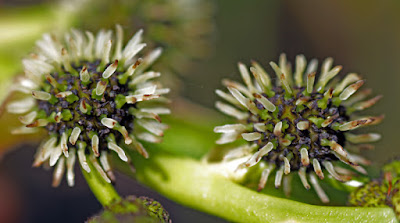 Common around the lake margins were Branched Bur-reed, lots were in flower.

They looked like small pom poms in the greenery! 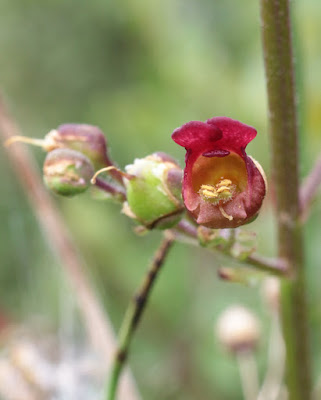 Water Figwort is another lover of the damp. They can be told apart from Common Figwort by the leaves which are a different shape with auricle like bracts.

Figworts are quite tall plants but with tiny red flowers. 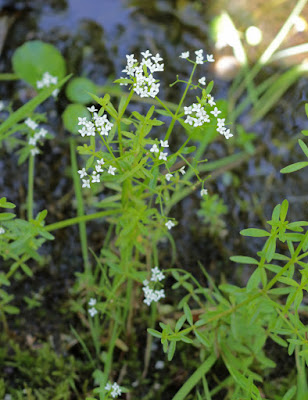 This is the last plant I photographed in the wetter areas. It was very common there as well.

There's several species of Bedstraw and to separate them the key is the tiny prickles on the leaf edges, which way they point, if there's any at all, whether there is a point or mucro on the leaf tip, how many leaves in a whorl and so on.
I always photograph in detail the leaves to firmly identify a Bedstraw, though where you find it will rule out most species straight away as there isn't a lot of habitat overlap. 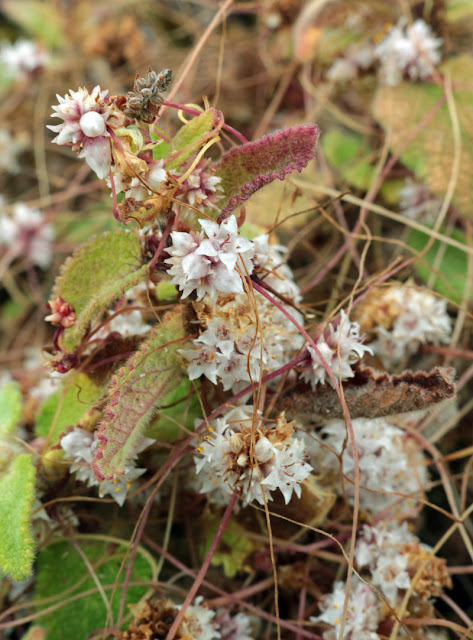 As I walked a different route back and came back onto dry shingle again, I noticed several clumps of Common Dodder growing on the abundant Wood Sage.


It's an RPR species in Kent and declining. I have also found it at Dungeness power station perimeter wall area, The Larches near Maidstone, at Kemsing Downs and Pol Hill near Sevenoaks, mostly on different host plants. These included Trefoils, Wood Sage and Broom. 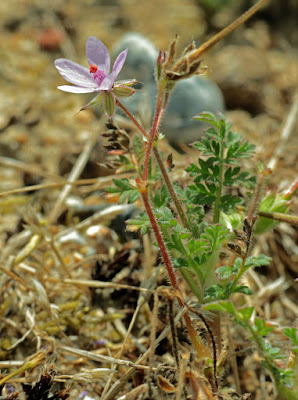 Back at the car park and here is my final plant from this part of my day trip out into the shingle habitats of Dungeness, the humble Common Storksbill.

Quite small, they are a stalwart plant of the coastal areas, in flower from April right through to late Summer. The leaves are quite distinctive as you can see, separating them from the similar Cranesbills that might also be rather small. 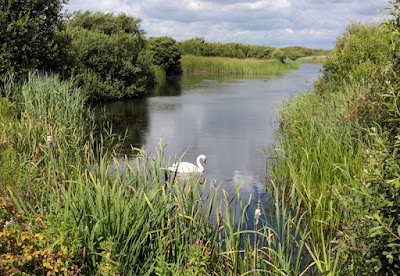 Dungeness is a massive reserve with many places to explore and a variety of rare species. Believe it or not, some people even go there to look at birds of all things!
I think we are part of the very few who joined the RSPB to "Give Nature a Home" not just birds like in years past. It's great the RSPB have expanded into nature in general, as without healthy habitats the birds won't come anyway.

I hope you enjoyed Part 2. Scroll down further to read Part 1 - Bogs and coming soon, as this day was not yet finished, will be Part 3 - Sand Dunes!