The Hunt for Burnt Orchids in East Sussex 21st May 2016

- May 26, 2016
2013 was the first year I became interested in wildflowers and wild orchids. Prior to this I didn't even know Burnt Orchids existed and by the time I did, any chance of seeing any had passed. So in the Winter of 2013 we did some research and found they were to be found in the vicinity of Mount Caburn in East Sussex near Lewes. By May of 2014 we made the journey down to Lewes and began the long haul up the very steep hill of Mount Caburn. 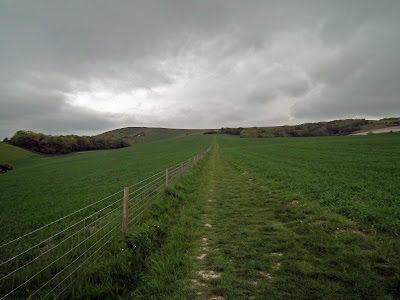 We were heading to the hill on the left of the fence and it's much steeper than it looks, 146m up in fact.

There's an iron age hill fort on top, have a read from Wikipedia here: 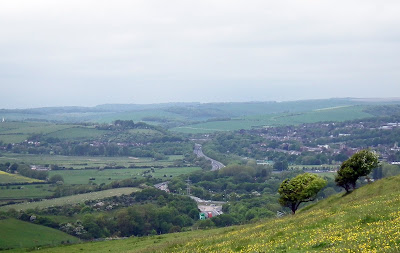 At the summit were far reaching views, quite spectacular, but often quite windy being so exposed. 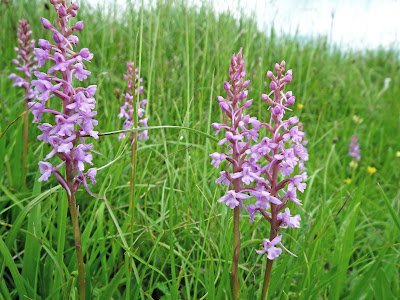 We searched all around the summit and found hundreds of Chalk Fragrant Orchids, an enormous brilliant display, on the steep slopes.


However, no Burnt Orchids were to be found.

I later discovered I was a few weeks too late in any case and all the Burnt Orchids had gone over by then. I was given another area on Mount Caburn where I was told they were, so would return again next year, hopefully at the right time.

By May 2015 we had discovered that there were two types of Burnt Orchid. The Early Flowering and the Late Flowering variants with the former being very small and the latter double their size or bigger.

We did the long trek uphill again to Mount Caburn to check out the site given to me the previous year. This time I was told they were on the South West facing slopes of the Mount. Wrong again! After a couple of hours of strenuous up and down the slopes searching I gave up again!

However, I had also been given a site for the Late Flowering Burnt Orchid, so a couple of weeks later (June 2015) we visited this site near High and Over, East Sussex. This time the information was spot on and we photographed the late flowering form. 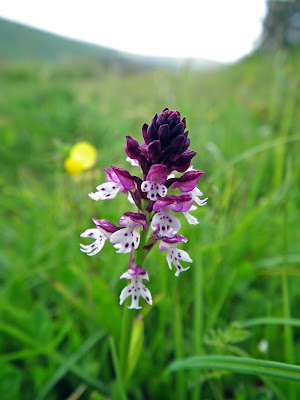 
Like miniature Lady Orchids, but different. This form has a much darker red/purple "Burnt" head of unopened flowers and is a lot taller than the early form. 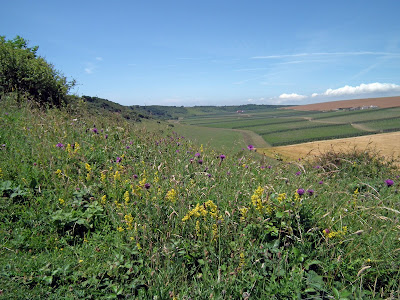 The views here were pretty good too and the white horse carved into the chalk hill was nearby at the National Trust car park.

There was another fantastic flower here I'd not seen before as well. 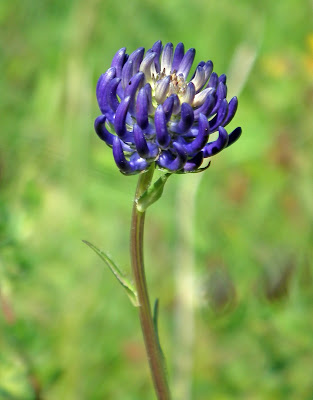 This is Round-headed Rampion, also known as the Pride of Sussex, being the county flower.

It's a rare plant but common in places on the South Downs.

Plenty of information on it here: 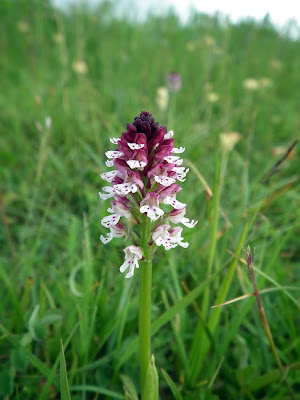 We then left the area, at last we had seen one of the Burnt Orchids, albeit not the one we had first heard of back in 2013. 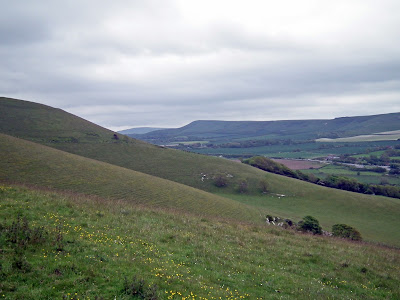 The story is not yet over though! May I bring you back to the present, or at least to the 21st May 2016 when we visited Mount Caburn for the third year running, with some more research done as to where to find them. 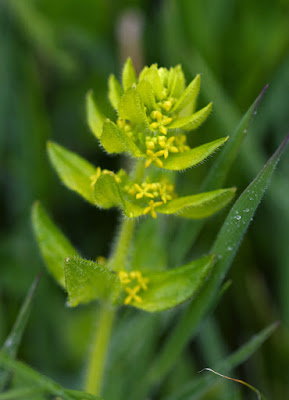 Not only was it a dismal cold day for this time of year but the skies were laden with clouds. Knowing we'd work up a sweat on the climb I only wore a hooded (Winter) sweatshirt.

On the way I up I saw Crosswort flowering, they stand out like bright beacons in green grasses. 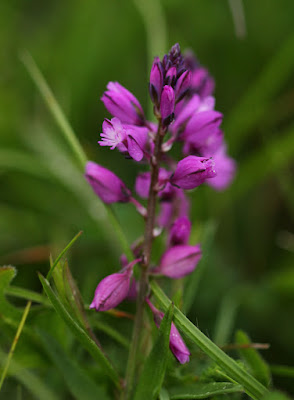 Once at the top I crossed over towards Lewes and got lost! Not lost lost, but couldn't determine exactly where I was on the map. As a result I walked about a kilometre too far, but on the way back I finally found the place where tthey should be.

Common Milkwort was abundant. This pink colour form in particular, which made things difficult. They were about the same height as these orchids I was looking for and a superficially similar colour! 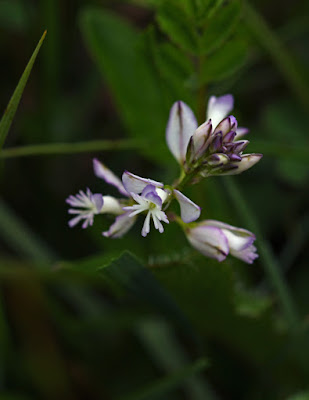 About now, the heavens opened and it poured down soaking me. I struggled to keep the camera dry, but my thick sweatshirt did the trick.

I had trudged up and down the slopes in this area for an hour and hadn't found the Burnt Orchids, I was getting rather despondent and thinking of calling it a day for a third year on the trot.

I noticed a few near white Common Milkworts along the way, along with an abundance of the usual blue form. 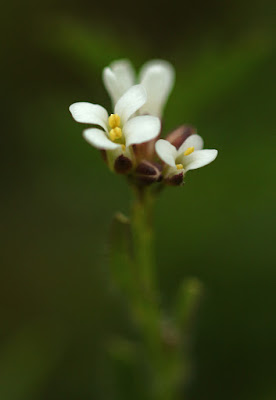 Some small white flowers caught my eye which were Hairy Rockcress which has stalkless leaves tight to the stem and of course hairy. 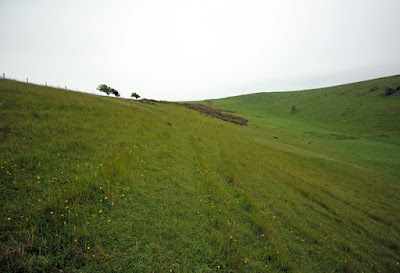 This was the area I was searching, it's steep from left to right and I was getting wet and tired. The wind had picked up and was driving rain into my face, most unpleasant.

I really was about to give up when I noticed some flattened grasses!

This is often an indication that someone has taken a photo there.

Sure enough someone had!
BINGO! 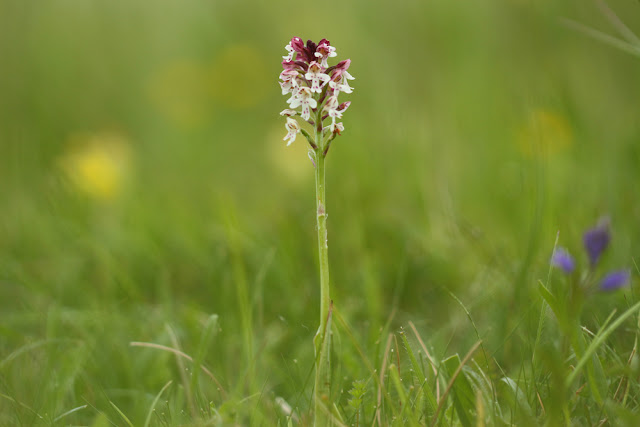 At last I was in the right area and I then found around 25 more soon after, every one after this was about half the size, this one is a giant for the Early Flowering form of Burnt Orchid! 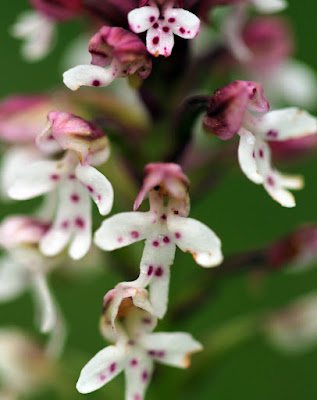 A local couple came along who knew the area well. They said come back in a couple of weeks and the whole area would be covered in them and that the cold Spring had delayed them by about 2 weeks.

So I was very lucky to see any at all. 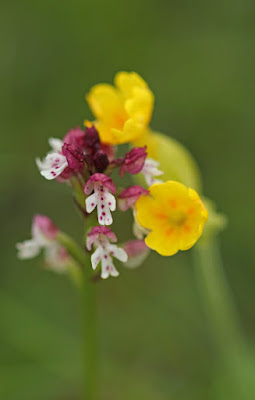 This one was next to a Cowslip which should be in seed by late May but is still going strong, a sure sign of delayed flowering. 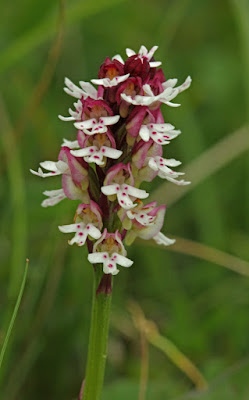 Of course, I took a lot of photos, but even at a few inches tall they were swaying in the howling wind making things very difficult. At least the low light levels reduced the over exposure on the pure white parts of the petals.

And so we descended back to the village of Glynde where the car was parked.

We had planned to visit the National Nature Reserve at Castle Hill near Brighton for Early Spider Orchids which number thousands there and flower later than those on the Kent coast.

Unfortunately the rain set in and when we got there it was still pouring down and no-one felt much like getting soaked all over again, so we left that reserve for another year. So ended a three year search for the elusive Burnt Orchid. I'll leave you with a comparison of the early and late flowering forms.