- May 22, 2016
Throughout the Summer months the KBRG hold field trips where the relative novice like myself can not only learn a lot quickly, but also get to see some rare plants. The Scotney estate is on mainly acid soils and I wondered what might be found. I am used to alkaline chalk soils that support a huge amount of species. Acid soils tend to support a more varied rush, sedge and grasses population, a section of botany I am still struggling with! This trip was a joint one with the Sussex Botanical Recording Group as well, as the walk straddled the two counties botanically. The botanical boundaries are historical (called Vice Counties) and no longer completely follow modern day county boundaries. 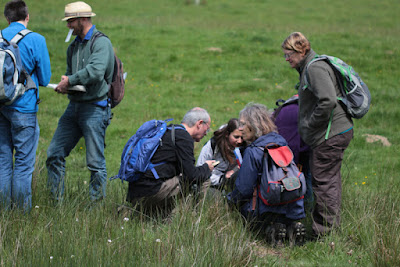 This is quite typical of a field trip, getting muddy grass stained jeans! 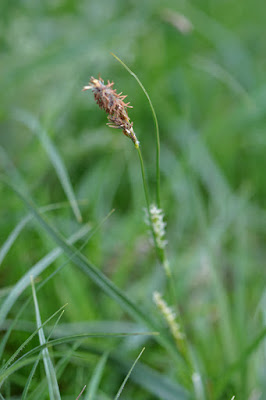 As expected there were many rushes and sedges to be found like this Hairy Sedge. 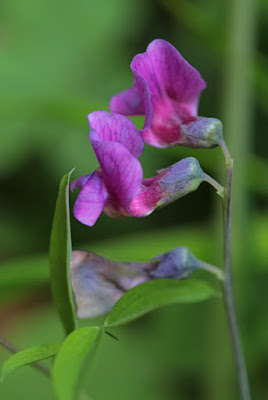 This was one of the plants I had hoped to see, a pea family member called Bitter Vetch. It's quite unlike the more common Bush Vetch and Common Vetch as it has a spike of quite large flowers. 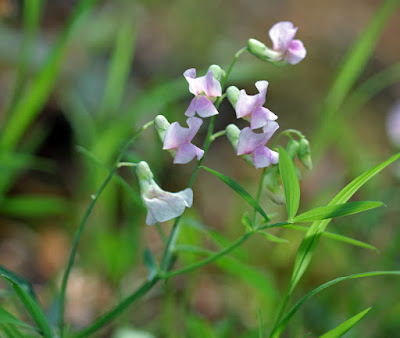 These were growing along the entrance road to Scotney Castle, I must have driven past them numerous times!

Here's a lovely pale form with a hint of pink. 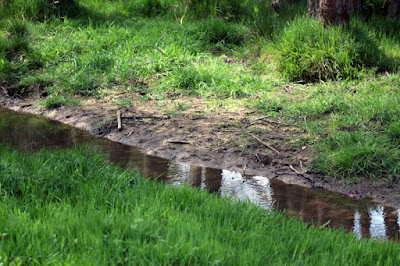 There's a stream running through a field which always gives rise to interest for me as it's a different habitat which may provide something unusual. 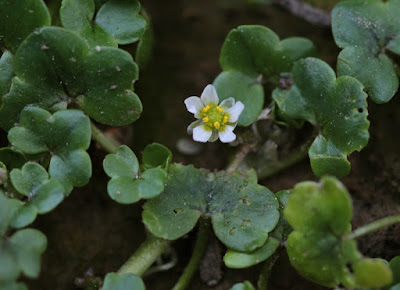 Sure enough, in the muddy margins were several clumps of Ivy-leaved Water-Crowfoot, a rare plant, and another I've never seen on my travels. 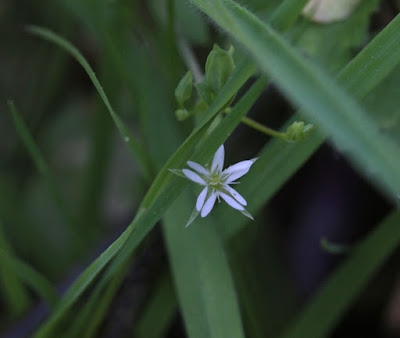 In another boggy area we found Bog Stictchwort. Much like Lesser Stitchwort but taller with deeply cut petals and spiked points to the sepals. This is a third plant new to me, so I was doing well today. It's quite common, but I don't have many acidic boggy areas near where I live! 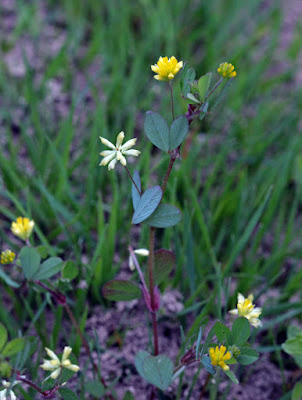 Lesser Trefoil was dotted around in the grass. It's usually very low growing and the few flowers are easily missed. It can also be mistaken for Hop Trefoil which has many more flowers in the flowerhead. 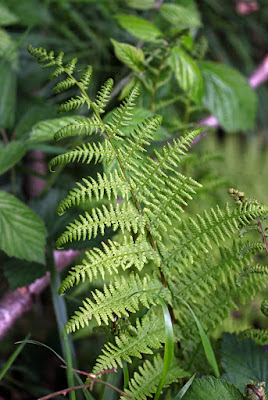 There were plenty of ferns as well, like this impressive Lady Fern growing by the River Bewl. 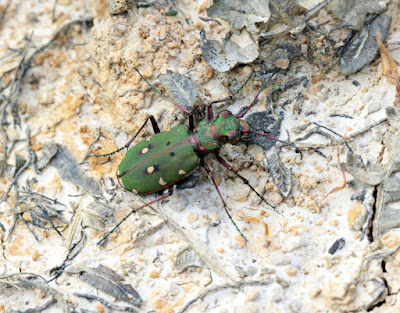 Near a newly dug pond I was very lucky to find a Green Tiger Beetle, my first in Kent, though I have seen them in East Sussex as well.

They scuttle about quite quickly and can easily fly off as well, making photos somewhat difficult! 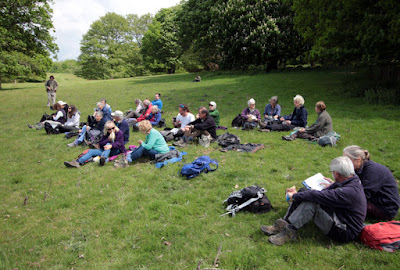 Here's a selection of Kent and Sussex recorders in action, eating lunch! Thankfully, it was a nice day with no rain, though there was a quite cool breeze if out of the sun. One of the group noticed some Forget-me-nots which was quickly identified as Changing Forget-me-not. So called as the flowers change colour as they age. The flowers are only 2-3mm across and though I must have seen them many times, I think I assumed they were all Early Forget-me-nots in the past, given their tiny flowers. 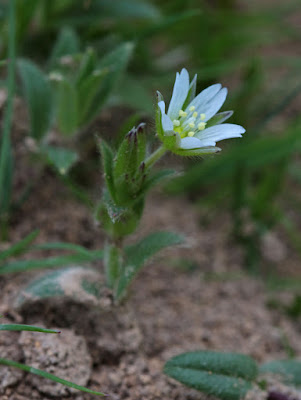 This was such a tiny Mouse-ear that I got the eye glass out to check it, but it was just a Common Mouse-ear on very thin poor soil over some old concrete half grown over. 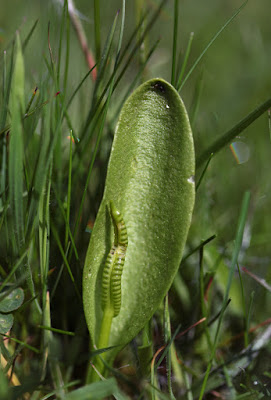 Believe it or not, here's another fern! This is the very interesting Adder's Tongue Fern which was abundant in the grasses, though very hard to spot being all green! 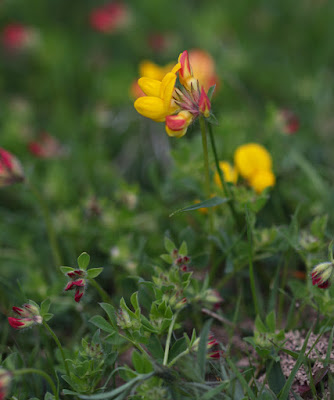 This is a common plant on chalk as well, it's Birdsfoot Trefoil. I took the photo as I was attracted by the red buds around the open yellow flowers, I thought it looked great! 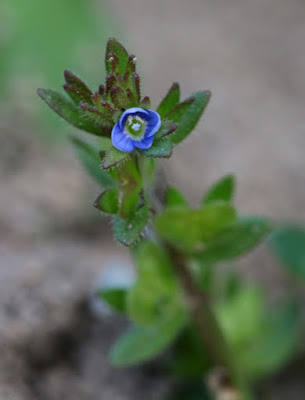 In bare places Wall Speedwell grew, the tiny flowers being virtually stalkless making it an easy Speedwell to identify. 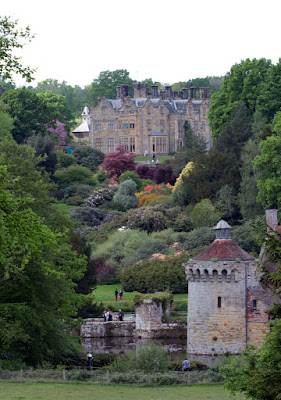 From one field there was a great view of Scotney House and Castle. At the moment, on the house lawns are about a thousand Green-Winged Orchids flowering, thanks to the management efforts of the grounds staff there and the National Trust.

We did manage to find a single Green-Winged Orchid where we were, but unfortunately it had gone over. Hopefully, in time, with the correct grazing strategy, there may be hundreds growing on the estate as well. 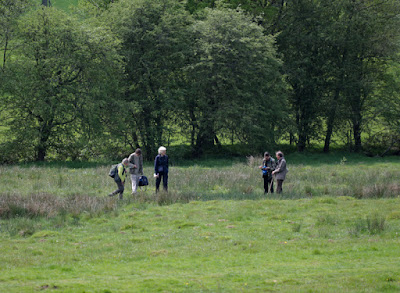 At one point, one of the experienced botanists discovered a hybrid patch of violets, a cross between Heath Dog Violet and one of the other Dog Violets I forget which now. Unfortunately I missed a photo opportunity there. 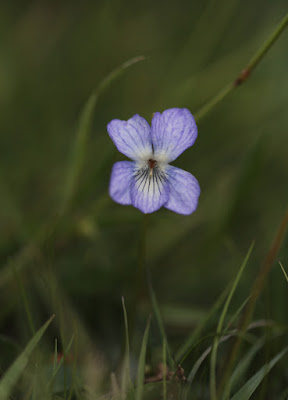 However, I was more than happy with the stunning blue Heath Dog Violets which were everywhere in the grasses, a delight to see. 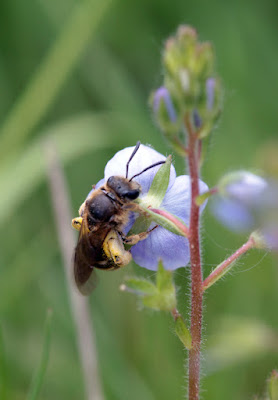 All these wildflowers attracted and fed the bees, hoverflies and so on. This solitary bee was on a Germander Speedwell flower. 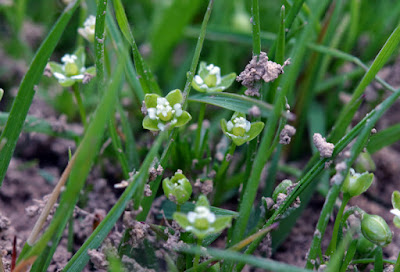 This is Procumbent Pearlwort, a common weed of roads and pavement cracks, so I was surprised to find a big flowering clump here, on an ant hill!


The flowers are really small but you can just make out the even smaller white half petals it has. 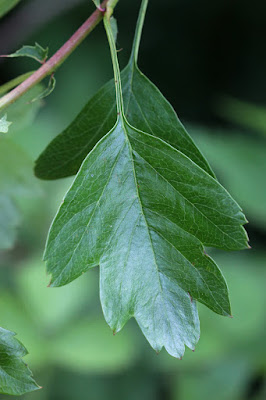 The final plant I photographed was this Hawthorn. One of the group pointed out that too many of the leaves were wrong for normal Hawthorn and this was very likely to be a hybrid between Hawthorn and Midland Hawthorn.

Hybrid flowers often have 1, 2 or 3 styles, usually a mix. Most of the open flowers were rather high up and in the ones I could reach only had the 1 style. However, when you see a normal Hawthorn, you can easily see the difference in the leaf shape. You need lots of leaves to look different, not just the odd one. 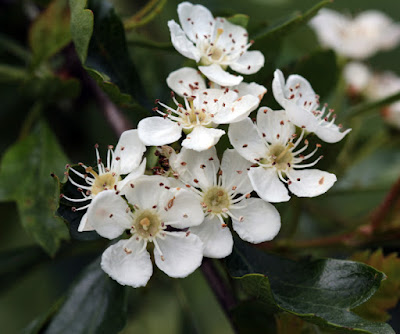 Here are the flowers, much bigger and more open than normal Hawthorn.

There was much more seen than photographed and a lot learned as well. I wish I could attend more field trips, it's a fast way to increase botanical knowledge, see new species and make friendly contacts with people of a similar interest. Why not join your local botanical recording group? Go to http://bsbi.org and click on your county for details. For Kent go to http://bsbi.org/kent