- May 01, 2016
The biting Northerly wind didn't seem too promising, though for the most part it was a sunny day. The onset of a cold Spring after such a mild Winter seems to be the norm now and the plants and the insects don't like it very much. 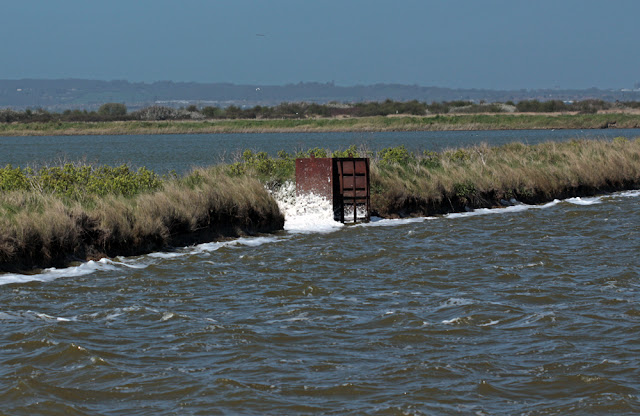 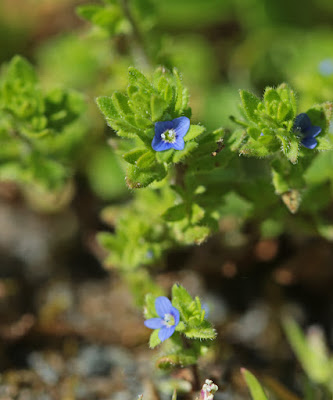 At this time of year there isn't much botanical interest in much of the paths leading to the Thames, but I did find these Wall  Speedwells.
They can be identified easily by the single flowers having virtually no stalk. They are very tiny flowers so easy to miss. 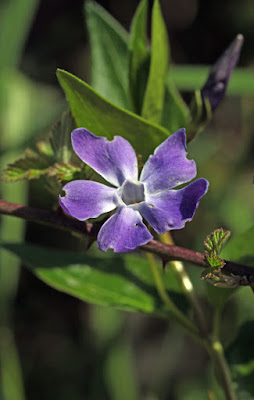 Greater Periwinkle had naturalised along the paths, well away from habitation. Look for larger flowers and a line of fine hairs around the leaf edges to tell them apart from Lesser Periwinkles. 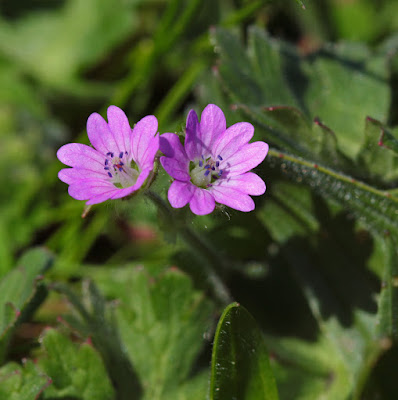 Round-leaved Cranesbill were coming into flower en masse. These can be tricky to tell apart from Dovesfoot Cranesbill, so look carefully at the leaves and hairs on the leaf stems. 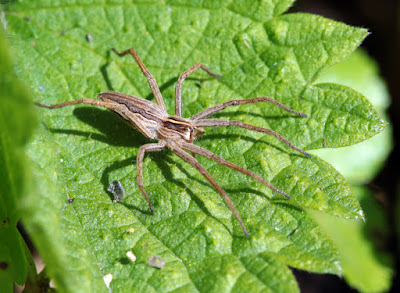 A Nursery Web Spider waits on a nettle for any insect stupid enough not to see it. 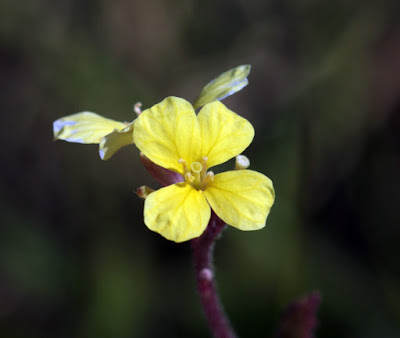 As we came to the path around Cliffe Creek I was dismayed to see it had been widely mowed a while back.
However, this Charlock still managed to come up, though the lack of any basal leaves had me baffled for a while. 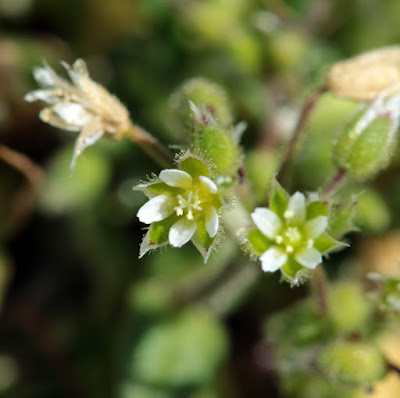 We then came to the sea wall which is usually the best part. In the cracks grew this Thyme-leaved Sandwort, a really tiny flower with petals shorter than its white edged sepals. 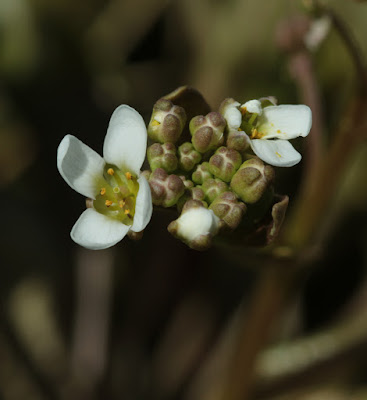 I found a few English Scurvygrass in the mud at the base of the sea wall. Much larger than the roadside Danish Scurvygrass it's relatively common on the North Kent coast but hadn't been recorded here in recent years so was a nice find. 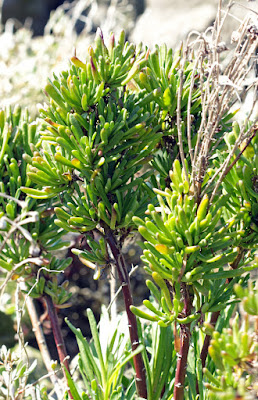 I think this is Shrubby Seablite, a rare perennial salt tolerant plant. It's small flowers come out in Summer, but if it is this plant it's a new find for this location. 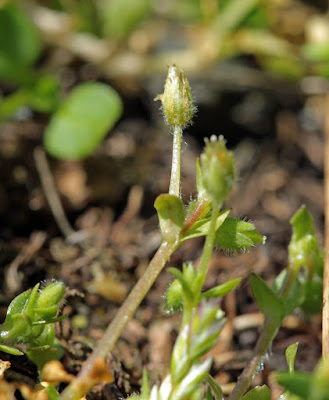 Back on the landward side of the sea wall and I found a patch of Lesser Chickweed, a pale green mat of tiny flowers that rarely fully open in the turf.

It was impossible to get a decent photo in the strong wind! 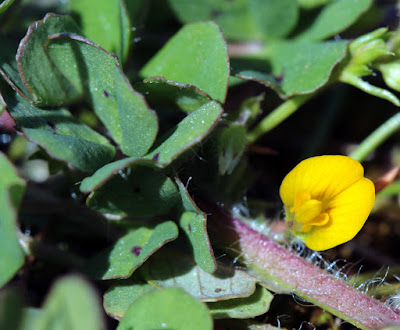 Tiny yellow dots in the grass turned out to be the flowers of Spotted Medick. You'll also find these in many lawns and grass verges in towns. 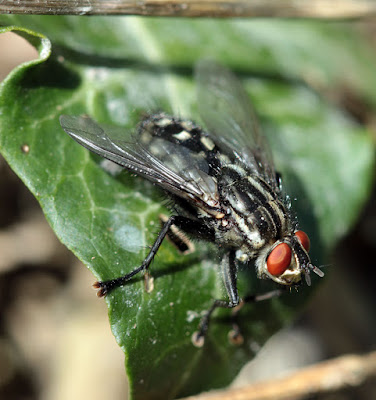 This flesh eating fly made a nice change! If you look closely it's actually quite an attractive insect with its black and white chequered back. 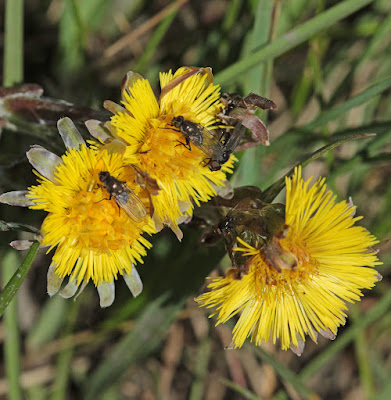 As we headed back we saw lots of Coltsfoot. These were packed with flies and solitary bees with nearby Dandelions not given a second look by the insects. I guess Coltsfoot has some attraction that Dandelions don't have? 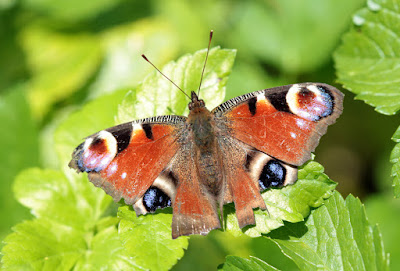 We saw this Peacock and a Small Tortoiseshell but that was about it today in the cold wind. This one had hibernated over the Winter and emerged recently.
You can see it's near the end of its time! 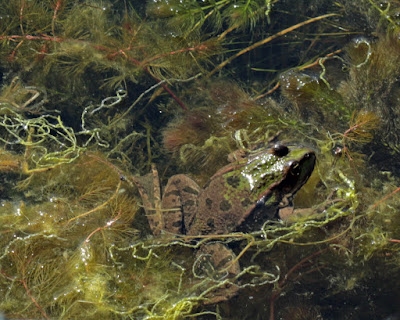 In the dykes were lots of frogs. They invariably see you coming and the first you know they were there is when you see the splash of them jumping away never to return. 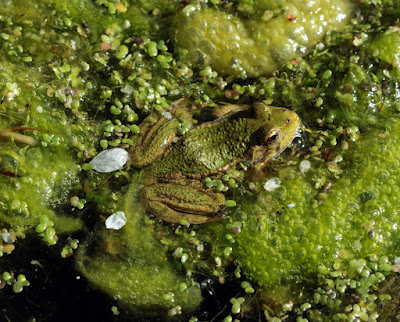 With a bit of patience I managed to get close to this one. I actually saw it leap out of the algae and take a fly that was flying past. It reacted with lightning speed.

The two frogs photographed look very different but I don't know if they are variably marked common frogs or different species, probably the former.


That was about it for this trip, a long walk for not many species, but nice anyway. This place is best visited botanically in the Summer months, you even get to see the Adders then as well!